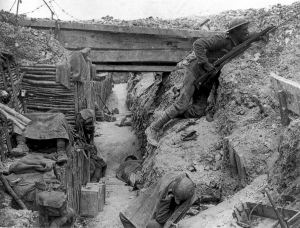 ~1916~
There is so much that could be written about the Battle Of The Somme, and much of it already written that it is hard to know what to start with.

Because we deal with irish History I think perhaps the 36th (Ulster) Division which went into battle on this day in 1916 and suffered heavy casualties (around 5000 killed and wounded) for their pains.

Wikipedia has a decent description of their first day:

On 1 July, following the preliminary bombardment, the Ulsterman quickly took the German front line. But intelligence was so poor that, with the rest of the division attacking under creep bombardment (artillery fired in front or over men; they advance as it moves), the Ulstermen would have come under attack from their own bombardment at the German first line.
But they still advanced, moving to the crest so rapidly that the Germans had no time to come up from their dugouts (generally 30′-40′ below ground) in the Schwaben Reboubt, which was also taken. So successful was the advance that by 10:00 some had reached the German second line. But again they came under their own barrage, not due to finish until 10:10. However, this successful penetration had to be given up before nightfall, as it was unmatched by those at its flanks. The Ulstermen were exposed in a narrow salient, open to attack on three sides. They were running out of ammunition and supplies, and a full German counter-attack at 22:00 forced them to withdraw, giving up virtually all they gained

BozoSapiens has a fine note on the overall commander on the day Douglas Haig that is worth reading:

Haig went on to an earldom and a retirement divided between golf and soldier’s charities. His legacy remains confused; no other general so splits historical opinion: “great captain;” “the man who won the war;” “donkey;” “butcher.” It shows the essential strangeness of war as a profession: after all, it is we civilians who choose to have one – but then immediately hand it over to secretive men in shiny boots.

I’m torn between deciding that the Somme was a wasteful battle fought for the wrong reasons, part of a war fought much the same way, and thinking both the war and the battle were fought for the right reasons in if not the best ways, at least with a decent knowledge of what was at stake.

To my mind, Haig, had he been in another place might have been hailed a Grant rather than dismissed as a Donkey!

One Response to "Today In Irish History – The Battle Of The Somme, 1 July"