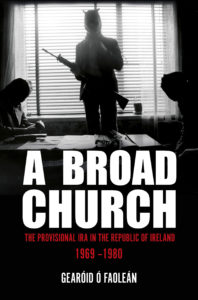 He finds a large degree of ambiguity in how southerners regarded the IRA. There was considerable sympathy for the organisation’s use of physical force in defence of isolated nationalist communities in Belfast in the early stages of the conflict.

Ó Faoleán argues it was the Provisionals’ high-profile role in repelling loyalist attacks on St. Matthews’ Church in the Short Strand which led many southern republicans to support them instead of the Official IRA after the 1970 republican split.

Gearóid Ó Faoleán’s new book A Broad Church: the Provisional IRA in the Republic of Ireland, 1969-1980 is an important contribution to our understanding of the Northern Ireland conflict

However, Provisional killings of civilians and members of the southern security forces caused considerable disgust in the south, marginalizing the group.

He also interviewed several IRA members who wished to remain anonymous, many of whom left the Provisional republican movement during the 1980s and 1990s. These interviews allow an insight into the operations of what was a necessarily clandestine organisation, revealing the IRA’s use of the Republic as a base to produce explosives, train volunteers and plan attacks in the north.

These interviews are supplemented by the usage of primary source documents, including material gleaned from Irish and British state archives. These are useful in tracing state responses to Provisional IRA activities in the 26 counties, and some British officials felt that Dublin was not doing enough to hinder the Provisional IRA’s use of the south.

Ó Faoleán also draws upon Provisional Sinn Féin periodicals such as An Phoblacht and Republican News, as well as the papers of leading protagonists such as the Ruairí Ó Brádaigh papers in NUI Galway.

Interviews with former IRA members allow an insight into the clandestine organisation, revealing the IRA’s use of the Republic as a base to produce explosives, train and plan attacks in the north.

This book joins recent works by authors such as Brian Hanley and Paddy Mulroe in exploring the impact of the Troubles on the 26 counties. Like these authors, Ó Faoleán highlights the sympathy and support which physical force republicanism enjoyed in the south from segments of the population, including supporters of Fianna Fáil, Fine Gael and Labour.

While such people were willing to aid the IRA materially, they were unwilling to give more explicit support. One of Ó Faoleán’s interviewees remarked that ‘They’d do anything for you that way, you could hide your guns or you could hide yourself. But they wouldn’t vote for you’.

Republican sentiments hindered the Irish state’s efforts to clamp down on the Provisionals in the early 1970s. Ó Faoleán cites instances of juries who openly congratulated IRA defendants, while Taoiseach Jack Lynch privately complained to the British about judges he regarded as sympathetic to the IRA. Government frustration with these acquittals contributed to the revival of the juryless Special Criminal Courts.

The United States was an early source of weapons for the Provisionals. Many displaced northern nationalists moved to the new town of Shannon in Co. Clare, and Irish-American soldiers stopping at the eponymous airport smuggled weapons to local republicans. As the conflict continued, other sources of arms became prominent. Ó Faoleán suggests that the Provisionals received Browning machine guns from radical elements within the Portuguese Communist Party in the aftermath of Portugal‘s ‘Carnation Revolution’.

While leading Provisionals such as Joe Cahill expressed misgivings about dealing with communists, mirroring the anti-communist rhetoric which appeared in Provisional periodicals immediately after the split with the Officials, ultimately pragmatism won out. The IRA’s acquisition of weapons caused significant anxiety for the southern authorities, with the Provisionals using southern bases to familarise volunteers with the new weapons.

Funding from Irish-American sources alone could also not hope to finance the Provisionals’ operations, and the organisation sought other funding avenues. Armed robberies became a key source of revenue, a Provisional unit netting £140,000 in what was then the biggest robbery in the state’s history in Shannon in 1974. Ó Faoleán notes that news of IRA robberies received ambivalent reactions from some in Irish society, highlighting a Clare supporter who expressed delight at the takings of the 1977 Munster Senior Hurling Final being stolen as ‘We [the Clare team] were robbed today, and now the GAA is robbed’.

However, Ó Faoleán emphasises that instances of violence during IRA robberies ‘significantly damaged “Robin Hood” perceptions of the perpetrators’, and the killings of two civilians, Eamon Ryan and Bernard Browne, in IRA robberies in 1978 and 1979 disgusted many members of the public. The IRA’s use of kidnappings also backfired badly on the group. The kidnappings of Lord and Lady Donoughmore in Tipperary in 1974 and the Dutch industrialist Tiede Herrema in Limerick in 1975 by a peripheral group of IRA volunteers led the organisation’s Army Council to ban kidnappings as a tactic.

Instances of violence during IRA robberies and kidnappings  ‘significantly damaged “Robin Hood” perceptions of the organisation in the south.

While overshadowed by the crisis in the H-Blocks, Portlaoise prison, where the bulk of republican prisoners in the south were transferred in 1973, was the site of considerable tension between IRA prisoners and the Irish state.

There were numerous instances of prisoners being ill-treated in Portlaoise, and the Prison Officers’ Association claimed that staff who had tried to restrain colleagues from assaulting prisoners had been intimidated and threatened by management. Along with the ‘Heavy Gang’, a group of Gardaí notorious for beating and extracting false confessions from suspects, the situation made clear the Cosgrave government’s contempt for civil liberties.

The extreme tension in Portlaoise was linked to the horrific bombing in Garryhinch, Co. Offaly in 1976, which left Garda Michael Clerkin dead and four colleagues severely wounded, with Detective Garda Tom Peters left blind and deaf. Committed by a ‘maverick’ group of local IRA volunteers previously involved in the Herrema kidnapping, Garryhinch, alongside the assassination of British Ambassador Christopher Ewart-Biggs and civil servant Judith Cooke the same year, caused a backlash towards the IRA.

The intense conflict the Provisional IRA was embroiled in in the north was inevitably different than the situation it faced in the south. The tensions between republicans in both jurisdictions which this geographical difference engendered is a recurring theme of the book.

Prominent members of the IRA in Belfast, such as Martin Meehan and Brendan Hughes, felt that southern IRA leaders such as Seán Mac Stíofáin were arrogant and insulated from the conflict. Inevitably, northerners came to dominate the organisation; while two of the first four PIRA Chiefs-of-Staff were from the south, from 1977 to 2005 not one Chief-of-Staff was a southerner.

Conversely, some southern republicans felt that Belfast IRA members were elitist and ‘didn’t really understand how the south operated’. Ó Faoleán cites instances of Belfast IRA volunteers casually leaving southern-based training camps to go shopping for cigarettes while armed, which risked exposing the landowners who had permitted the Provisionals to use their land for training camps.

I recommend this book highly as an important contribution to scholarship on Irish republicanism in late twentieth-century Ireland,

However, Ó Faoleán also cautions against overstating the role of geography in fostering tensions within the Provisional republican movement during the period. He contends that the replacement of the older Sinn Féin leadership around Ruairí Ó Brádaigh by the ‘young guns’ around Gerry Adams was primarily motivated by tactics and ideology, rather than geographical differences between the Roscommon-based Ó Brádaigh and Belfast-based Adams.

There were some parts of the book where Ó Faoleán could have expanded more on the points he makes. For instance, he references the expulsion of the North Kerry comhairle ceantair by the Sinn Féin leadership in the mid-1960s as presaging the later split in 1970, but fails to substantively discuss the reasons for the expulsion.

He makes the interesting point that some republican leftists joined the Provisionals rather than the Officials as they felt the former organisation was better placed to defend northern nationalists, but does not elaborate beyond some references in the footnotes.

Nonetheless, I recommend this book highly as an important contribution to scholarship on Irish republicanism in late twentieth-century Ireland, Ó Faoleán raising many other fascinating points which space does not allow me to mention. Chiming with recent works by Hanley and Mulroe, this book reveals the profound impact the Troubles had on state and society in the 26 counties, and is essential reading for anyone interested in the subject.

One Response to "Book Review: A Broad Church: the Provisional IRA in the Republic of Ireland"