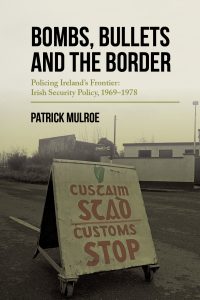 Since June 2016, Brexit has dominated public discourse in both Britain and Ireland, with Britain’s decision to leave the European Union in that month’s referendum threatening to cause the most serious rupture in Anglo-Irish relations for years.

The issue of the Irish border received comparatively little discussion in the UK media prior to the referendum taking place, but has emerged in the period since as a key fault-line in negotiations between London and Brussels. While the twenty years since the Good Friday Agreement have witnessed a vast reduction in violence along the border, the Brexit vote has revived concerns that a greater degree of border security could revive old tensions by endangering the harmoniousness that has largely marked cross-border travel since the end of the Troubles.

In the era of Brexit, this book serves as a timely reminder of the impact of the Troubles on the Irish border

Now, Patrick Mulroe, a PhD graduate of the University of Ulster, has produced an important new study of the Irish border during the early years of the Troubles, which serves as a timely reminder of the impact of the Troubles on the Irish border. The study is clearly a personal one for Mulroe, who, as a native of Emyvale, Co. Monaghan and a schoolteacher at Our Lady’s Secondary School, Castleblayney, has a keen familiarity with day-to-day life along the border.

Mulroe makes ample use of previously neglected archival material in both Ireland and Britain created by the security services in both countries. He notes that ‘much of the bureaucratic material associated with the Troubles remains redacted or withheld’.

Illustrating the continuing sensitivity of the period, several of Mulroe’s Freedom of Information requests for files in the British National Archives were rejected. The assessments of subsequent British ambassadors are an important source drawn upon, as they frequently commented on security arrangements and the performance of the Gardaí and Irish Army. While the earliest stages of the Troubles were largely confined to Derry and Belfast, the border became a significant source of conflict as the 1970s continued.

Although the level of violence there decreased somewhat in the late 1970s, south Armagh remained an enduring source of friction. Along the border, relationships between the Gardaí and British forces varied notably according to the personal relationships that existed between individual RUC and Garda members, and Gardaí were understandably less willing to cooperate with RUC members rumoured to be close to loyalist paramilitaries.

The Irish Army was regarded by the RUC and British Army as significantly less friendly than the Gardaí.

Mulroe emphasises the effect of these personal dynamics on cross-border security, noting that many individual Gardaí served on the border over several decades and that an abrasive encounter between a Garda and a British army patrol could shape a Garda’s attitude for years. He detects a noticeable difference between Garda and Irish Army attitudes, with the Irish Army being regarded by the RUC and British Army as significantly less friendly than the Gardaí.

Supplementing these archival sources, Mulroe draws upon provincial newspapers such as Fermanagh’s Impartial Reporter and Monaghan’s Northern Standard, as well as other contemporary periodicals, including Garda magazines such as the Garda Review and Garda News and republican newspapers such as the Provisionals’ An Phoblacht and the Officials’ United Irishman.

These periodicals are useful in delineating some of the controversies which the Gardaí faced during the period, and the 1977 attempt to convict the Garda Review’s editorial board for publishing a controversial editorial particularly illustrates the extent of what Mulroe describes as the ‘draconian discipline’ of subsequent Irish governments.

Republican newspapers from the mid-1970s frequently contain claims of Garda mistreatment of suspected republicans. While the Cosgrave government dismissed these claims as propagandistic, the allegations became damaging for the government when reported by mainstream newspapers like the Irish Times, subjecting the Gardaí to scrutiny.

Oral history is also an important source in this book, and Mulroe draws extensively upon the Green and Blue Oral History project (green-and-blue.org) which has collected the oral testimonies of Garda and RUC officers who served along the border. These testimonies cast important light on the experiences of Gardaí who served along the border, including the isolation felt by some Gardaí from elsewhere in Ireland who were stationed by their superiors in border communities.

Tensions between republicans and Gardaí, inflamed by events such as the killing of Garda Michael Clerkin in an IRA bombing in Garryhinch, Co. Offaly, in 1976, are highlighted.

The Smithwick Tribunal has brought attention to the issue of Garda-IRA collusion, and Mulroe notes instances of Gardaí who gave information to Provisionals. However, he emphasises that these were isolated cases, and that the vast majority of Gardaí were utterly antagonistic to the IRA, with young Gardaí and young republicans sometimes clashing at pubs and dances while ‘off-duty’ in border towns.

Complementing recent research on the impact of the northern Troubles on the Republic of Ireland by Brian Hanley and others, Mulroe’s book is an important contribution to our understanding of the Troubles’ impact on state and society in the south. Like Hanley, Mulroe emphasises the changing nature of southern responses to the conflict, and the conflicting emotions it generated in the 26 counties.

Nonetheless, Mulroe argues that while there was not insignificant southern sympathy with the IRA during 1969-70, these emotions were quickly replaced by a fear that IRA activity, instanced by a large spike in armed robberies, risked destabilising the south. He suggests that the killing of Fine Gael senator Billy Fox in 1974 was a particularly stupid and counterproductive act by the Provisional IRA in this regard. Fox, a Protestant, had been a Fine Gael TD from Monaghan and had lost his seat in the 1973 general election – in part because his outspoken nationalist views alienated many of his voters. His death was a visceral example of the northern conflict spilling over into the south.

The book also questions the extent to which the Cosgrave government’s hard-line security policy prompted its defeat in the 1977 general election, arguing that the country’s abysmal economic performance was more important and that security and Northern Ireland were two areas where the coalition’s performance was more popular than Fianna Fáil’s.

Even the Irish Press, a traditionally nationalist newspaper, declared in its editorial on the killing of Garda Clerkin in 1976 that many in the south wished to have ‘a great high wall built around the north to partition it off from the rest of the country’, highlighting the manner in which many southerners were recoiling from the northern conflict. Along with the widespread revulsion prompted by IRA actions such as the Fox and Clerkin killings, loyalist atrocities in the Republic – such as the murder of forester Seamus Ludlow in Co. Louth in 1976 – were sometimes misattributed to the IRA by authorities, increasing southern opposition to the Provisional campaign.

This is a highly recommended and important work that ably illustrates many of the contradictions of the era.

One criticism of the book is that it fails to overtly break from the structure of the PhD on which it is based. Chapter One, for instance, contains a literature review of the existing scholarship on border security in the period, something crucial in a PhD thesis but unnecessary in an academic book.

Nonetheless, I recommend this highly as an important work that ably illustrates many of the contradictions of the era. The appointment of Drew Harris, a former RUC member whose father was killed by the IRA, as Garda Commissioner is indicative of the sea-change in the security situation on both sides of the border.

At the same time, the important and necessary concerns the appointment has raised from survivors of loyalist attacks where British state collusion is suspected illustrates the enduring legacy of the conflict. This study is a timely reminder of how cross-border tensions during the conflict strained relations across these islands, at a time when the Irish border has become central to the future of Ireland, Britain and the European Union as a whole.