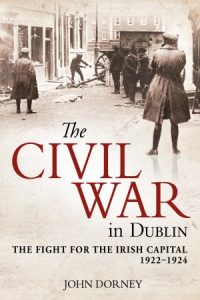 John Dorney on his new book The Civil War in Dublin the Fight for the Irish capital.

Joseph Conrad began his famous short story ‘Heart of Darkness’ with his lead character on board a ship steaming into London, musing that once this had been an untamed Celtic wilderness. ‘This also’ he says, ‘has been one of the dark places of the earth’.

Writing about the Irish Civil War in Dublin, 1922-23, this line sticks constantly in the mind.

Dublin, today a mostly sedate and safe city, also has been one of the savage places of the earth.All hell seemed to break loose after the National Army opened up on the Four Courts on June 28, 1922.

The AIB bank in Rathfarnham village, close to my home, was in 1923 a police barracks, and was blown sky high with explosives by anti-Treaty IRA fighters. The buildings on O’Connell Street, Dublin’s main thoroughfare, were shot up and burned by National Army troops with incendiary devices and artillery shells in July 1922.

Prince’s Street beside the GPO, once held a world title boxing match which in March 1923 the IRA attacked with a bomb, having previously forbidden all public entertainments. Cathedral Street, where once National Army soldier John Pinkman decided to shoot out all the windows because he was bored.

Far more than property was destroyed in Dublin in that year of in-fighting between Irish nationalists; the bodies piled up too – at least 258 in the city according to my count.

Almost every street has its story. The shop at the end of Rathmines Road where pro-Treaty politician and, perhaps, undercover Free State operative Seamus Dwyer was gunned down in December 1922. The memorial stone to Frank Lawlor in Milltown, the anti-Treaty IRA officer who was abducted and murdered in revenge for Dwyer.

Griffith College, then Wellington Barracks, inside whose walls prisoners were systematically beaten and where in November 1922, anti-Treatyites from the surrounding rooftops machine gunned National Army troops lined up on the parade square.

All of these places will have the dark events of the Civil War lodged permanently in them in my mind. But almost anywhere in the city has its Civil War ghosts.

Let’s take just one street, Eden Quay, along the river Liffey just to the east of O’Connell Street.

On June 29, 1922, just one day after the Civil War had begun with the bombardment of the Four Courts and fighting had broken out throughout the city centre, Thomas Daly, 45 years old and an attendant at the National Museum, peered out of the window of his flat at 17 Eden Quay, no doubt to observe the gun battles outside.

He was immediately struck by a burst of gunfire and killed, his wife wounded in the arm. Another civilian, John Doran was also killed in the crossfire of the battle for Dublin on July 4.[1] Which side was responsible for these deaths we will probably never know.

The anti-Treaty IRA, the Republicans to their friends, the ‘Irregulars’ to their foes, were driven from their fixed positions in Dublin by July 5, but by September 1922, they were mounting a quite intense guerrilla campaign in the city, attempting to bring down, as they saw it, the British-backed Free State ‘Junta’ which had attacked them without provocation.

The anti-Treaty IRA saw their struggle as legitimate warfare, the pro-Treaty side thought it was wanton terrorism and took revenge accordingly

On September 13, 1922, a grenade hurled at a National Army car on Eden Quay injured two soldiers and two civilians. Such attacks on troops travelling the city’s main thoroughfares became common in the autumn of 1922, killing and wounding dozens of soldiers and civilians. Another attack on September 20 wounded two more soldiers there.

To the anti-Treatyites this was a legitimate form of warfare; ‘The enemy – English and Free State – patrols and posts are constantly being sniped and bombed in Dublin city and suburbs. Reports received record several minor operations in which our forces have suffered scarcely any casualties, whilst the enemy has several almost daily … In Dublin the enemy has committed several murders of our troops … which proves he is getting the worst of the war, though superior in numbers.’[2]

To the Provisional Government and their supporters, however they were simply a cowardly and wanton form of terrorism, in defiance of the elected government.

The pro-Treaty Freeman’s Journal wrote of such attacks: ‘Military operations in Dublin ended with the surrender on O’Connell Street … as an organised force the Irregulars have disappeared from the city [but] some stray individuals still indulge in wild sniping [and] fling bombs at no risk to their own skins, from behind a screen of hapless civilians.’[3]

Inevitably some such attacks were fatal. Two days later, a National Army troop lorry driving down Eden Quay was attacked with grenades and guns by waiting guerrillas. As usual there was a deafening blast of the improvised grenade, followed by the sharp crack of hand guns. When the smoke had cleared three civilians were lying seriously injured on the pavement, another three Free State soldiers were wounded and one James Kennedy, died on arrival at St Vincent’s hospital, killed by a shrapnel wound to the head.

Kennedy, like many National Army soldiers was a working class Dubliner from East Wall, who had served in the British Army in the Great War, in his case in the Dublin Fusiliers. He was married with three children and his widow Catherine, received a government pension until she remarried in 1927.[4]

The National Army soldiers generally believed that their enemies were cowards, pursuing a pointless struggle against fellow Irishmen at little risk to themselves and they found ways of taking revenge for the death of their comrades.

Michael Neville, an IRA man from Lisdoonvarna, County Clare was working in pub on Eden Quay, outside which James Kennedy was fatally wounded. Whether he took part in the ambush or not is unclear, but he took the brunt of the Free State troop’s reprisal.

He was manhandled into a car by ‘two young men with revolvers’ and driven to a disused cemetery in Killester, north of the city, where he was shot four times in the hand, arm, jaw and head.[5]

According to the Republicans, Free State troops accosted Neville’s grieving relatives, who travelled from Clare to retrieve his body from the city morgue: ‘The [Free] Staters rushed in and found the relatives praying and ordered them to put up their hands and come outside for one hour. They were told by the Free Staters that they would get men to deal with them’.[6]

Labour Leader Thomas Johnson brought up the case in the Dáil:

A certain man was taken out of his place of employment, taken into the country, and shot. An ordinary murder, motive unknown, one might say. He lies in the Morgue; his friends come to visit him; they pray, and military forces come up in lorries and armoured cars and arrest these men and denounce them, and threaten them, and say: ‘If that man had not ever handled a gun, he would not have lain where he is.’ That is what happened in the case of this man Neville.[7]

Eden Quay, a street 200 metres long, thus gives an idea of the war’s cruel logic of attack and retaliation, breeding a hatred and viciousness apparently out of all proportion to the war’s political causes.

The emotion we are left with, in the end, should not be anger but rather simple sadness at the waste of it all.

A mere catalogue of horror?

One reason to catalogue the events of the Irish Civil War is simply that they have remained unspoken of for so long in Ireland. This alone, I believe, is a good enough reason to write about it.

It is worth understanding also that, as Conrad put it, ‘this also has been one of the dark places of the earth’. Irish people are just as capable of vindictive cruelty as any other.

Is chronicling the Civil War in Dublin, then, a mere catalogue of horror? What did it all mean in the end? In a previous article on the Irish Story, I attempted to explain the mechanics of the Civil War, how both sides attempted to control the sinews of state, its ability to enforce law and collect taxes and how terror therefore functioned as a tactic when the anti-Treaty side avoided direct combat.

The Civil War in Dublin tries to understand rather than to advocate for the point of view of either side.

This, however, explains the ‘how’ more than the ‘why’ of the Civil War.

Was it, as the Republicans alleged, a counter-revolution of reactionary pro-British elements, supported by the Catholic Church, the media and the Irish bourgeoisie? Perhaps. Certainly the likes of pro-Treaty Minister Kevin O’Higgins would have been happy to think of it in that way.

He wrote to his colleagues in early 1923 that if the Civil War continued, it would ‘pave the way for incipient Bolshevism’ and urged that the military policy must change to an ‘extermination of the anarchist faction’. The new pro-Treaty political party, he urged, must link up with the ‘great class interests and the Church against the atheist, the Freemason and the Bolshevik’.[8]

But some of the most brutal Free State military personnel, the followers of Michael Collins in his IRA Squad before the Treaty, certainly would not have seen things in this light. To their minds they were also Republicans, continuing Collins’ work. And organised Labour essentially remained neutral in the Civil War. Moreover, if the Civil War was a counter-revolution then it was largely endorsed by the Irish electorate in the elections of both June 1922 and August 1923, both of which were convincingly won by the pro-Treaty side.

So was it then, a war for democracy against anti-Treaty militarists, for what Michael Collins wrote was ‘a fight for national freedom’ for the ‘freest and most democratic system yet devised’ so ‘the Army has to recognise that it is the servant and not the master of the people’.[9] Again, in part. But the same Michael Collins refused to allow the Dail, elected in June 1922 to meet as long as the Civil War continued. In fact it only met after his death in August 1922.

Tellingly also, the Free State granted its troops an amnesty in August 1923, long before they granted one to their enemies, a tacit admission that much of what they had done to suppress the regulars had been illegal by their own lights.

If Irish democracy was narrowly saved in 1922-23, not all of the menaces to it came from the anti-Treaty side. So perhaps it is best, in the end, not to look for confirmation of the subsequent analyses of either side.

In The Civil War in Dublin, I attempted to understand the mindsets of both sides and to judge their choices as little as possible. This book cannot in the answer the question of ‘why’ but it can hopefully help to understand how Dublin, at the dawn of Irish independence, became the site for such brutal and unforgiving enmity between former comrades.

3 Responses to "Reflecting on The Civil War in Dublin"