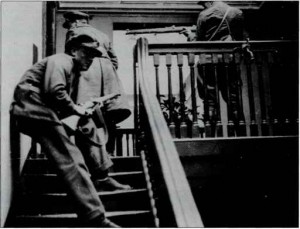 For all of these reasons, the Treaty was viewed as a step backwards by many Irish Republicans and nationalists. It was narrowly passed by the Dail or republican parliament in January 1922 after heated debate, but the President of the Republic, Eamon de Valera and two of his ministers resigned in protest. Having declined to take part in the Treaty negotiations, de Valera promoted a revision whereby Ireland would have ‘external association’ with the British Commonwealth. Those who had signed the Treaty, headed by Michael Collins and Arthur Griffith formed a Provisional Government to oversee the handover of power from the British to the new Irish state.

57 Responses to "The Irish Civil War – A brief overview"