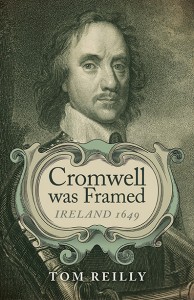 Oliver Cromwell’s name is one the most potent symbols in Irish historical memory. The mere mention of it generally prompts such epithets as ‘murderer’, ‘scumbag’, ‘genocidal  maniac’ and so forth. So infamous has the memory of his campaign in Ireland from 1649 to 1650 become.

Tom Reilly contributed an engaging summary of his book to the Irish Story recently, reiterating his argument, first penned in his 1999 book, ‘Cromwell, an Honourable Enemy’ that Cromwell was in fact not guilty of the charges of the mass murder of Irish civilians of which he is accused.  In this book he defends this thesis against various historians who have criticised it, notably Michael O Siochru in ‘God’s Executioner’.

Reilly argues that Cromwell was in fact not guilty of the charges of the mass murder of Irish civilians of which he is accused.

The format of ‘Cromwell was Framed’ is not as readable ‘An Honourable Enemy’, as the former consists in large part of lengthy reprinting of contemporary sources, in an effort, says Reilly, to let the reader make their mind up for themselves. This is indeed interesting in places; Cromwell’s full address to the Irish Catholic Bishops for instance is fascinating.

Take this stirring piece of invective penned by Old Ironsides;

‘remember ye hypocrites that Ireland was once united to England. Englishmen had good inheritances which many of them purchased with their money…they lived peaceably and honestly among you…You broke this union. You unprovoked put the English to the most unheard of and barbarous massacre (without respect to age or sex) that the world ever beheld. And at a time when Ireland was at perfect peace and when through the example of English industry through commerce and traffic, that which was  in the natives’ hands was better to them than if all Ireland had been in their hands and not an Englishman in it.’

Cromwell goes on to explain why he puts the fault for the war in Ireland squarely on the shoulders of the Catholic clergy who have duped their ‘poor deluded laity’ and who use the ‘fig leaf’ of support for the King to further their designs for religious domination. ‘We are come to break the power of a company of lawless rebels, who having cast off the authority of England, live as enemies to human society’.

But elsewhere the reader can flag a little at the relentless detail of the arguments over what Cromwell did and did not do, specifically at the siege of Tom Reilly’s native Drogheda in 1649.

Reilly argues that far from being a slaughterer of civilians, Cromwell respected the laws of war (such as they were at the time) during his campaign in Ireland and did his best to protect civilians. He argues that in the siege of Drogheda there is no compelling evidence to show that any large number of civilians were killed and that at Wexford the following month those civilians who died accidentally drowned while trying to escape or were killed in the crossfire between the two sides.

So for the reviewer there are two questions. One, is he convincing? And two; does it matter?

Let’s deal with the first question first – did Cromwell massacre the inhabitants of Drogheda in September 1649? As we have covered here on The Irish Story before, on September 11 of that year, Cromwell, leading the English Parliamentarian New Model Army summoned the garrison of Drogheda to surrender. Drogheda was held by a Royalist force with both English and Irish troops led by the English Catholic Arthur Aston. Aston would not surrender and the town was stormed.

While the slaughter of Royalist soldiers at Drogheda was horrific, there is little evidence that large numbers of civilians were killed there.

Almost the entire garrison of 3,000 men, including Aston himself, was killed, many after they had tried to surrender and some after they actually did surrender. The heads of the Royalist officers were, in manner reminiscent of contemporary atrocities in Syria and Iraq, cut off and put on poles along the road back to Dublin. Whether or not one accepts, as Reilly does, that this was within the accepted boundaries of 17th century warfare, it was still a horrific event.  Only by retrospective dehumanisation of the Royalist soldiers can this be denied.

However this is not the core of the book’s argument. Royalist and Irish Catholic writers and propagandists in the months and years afterwards maintained that Cromwell’s troops massacred the unarmed townspeople of Drogheda. Is this true? Reilly argues cogently that it is not. To a large extent it appears he is right. There are very few references to civilians being killed wholesale during the siege in contemporary accounts and only a few of accidental or what we might call ‘collateral’ killings.

The exception to this is Cromwell’s own letter to Parliament about the siege.  It listed 2,800 Royalist soldiers killed ‘and many inhabitants’. Reilly points out that the original of his letter does not survive and that some reproductions of the letter contain the line about civilians and some do not. Moreover Cromwell himself vociferously denied later that year at New Ross that he had ‘killed, massacred or banished’ anyone who was not ‘in arms’ in Ireland.

Also, as Reilly points out, Drogheda had been consistently in Parliamentarian hands from 1647 to 49. There was no automatic reason why the population should have been targeted for massacre.

In the opinion of this reviewer, we therefore cannot be sure that a massacre of civilians (as opposed to surrendering soldiers) occurred at Drogheda and we should really stop saying it did. It is certainly possible that civilians were killed in the sack, maybe even several hundred, but it seems clear there was no targeted massacre.

We can also note that at the sieges of Kilkenny and Clonmel, where his assaults were repulsed with heavy losses (in the case of the latter grievous ones), Cromwell fully respected the terms of surrender he agreed with the Irish Catholic garrisons there and the townspeople. At the very least the picture of Cromwell as indiscriminate killer must be modified.

On to question two; does it matter? The thesis here seems to be, to paraphrase; ‘in 1649 English Parliamentarians killed English Royalists at Drogheda as part of a civil war throughout these islands and Irish nationalists mistakenly remember it as an example of English tyranny in Ireland’.

This is where I felt the book’s argument was much weaker. At the very least this hugely oversimplifies events in mid 17th century Ireland. In particular the thesis that since Drogheda had been a Pale (i.e. English speaking) town in the medieval period it would not have been Irish or Catholic in 1649 is very much mistaken. Irish identity was in flux at the time, being forged on the anvil of religious war. In 1641 Gaelic Irish rebels from Ulster came to the Pale around Dublin and for the first time in history the English speaking Pale lords, in a famous ceremony at the Hill of Crofty in County Meath declared common cause with them as fellow Catholics.

Where this book is weaker is in setting the historical context of the Cromwellian campaign and its significance.

Tom Reilly’s assertion here that the Pale rejected the uprising of 1641 is plain wrong.  When Drogheda was besieged for first time in 1641 elements of the town’s population attempted to open the gates for Phelim O’Neill’s insurgents. Similarly his idea that Dublin supported the Parliamentary forces on principle seems to downplay the fact that the Catholic population had actually been expelled from the city during the wars after 1641.

He sets up a distinction between the townspeople of Drogheda (English) and Wexford (Irish) that would have seemed odd at the time. Both were predominantly English-speaking Catholic towns. That Wexford was held by Irish Confederates and Drogheda by predominantly English troops (first Royalists and then Parliamentarians, then Royalists again) was simply the fortunes of war. A generation earlier both towns would have been deeply hostile to their Irish speaking Gaelic neighbours in the Nine Years War. But by the 1640s, for better or for worse, it was principally religion that determined people’s allegiances.

The idea that a new Irish identity was formed out of Catholicism and loyalty to the English King, Charles Stuart against the English Parliament is not one that many Irish people would identify with today. But not to appreciate this and not to appreciate that resisting Parliamentarian conquest for Irish Catholics meant, as they saw it, resisting dispossession and religious persecution is to fail to recognise why Cromwell became a hate figure in Irish popular understanding.

The war in Ireland from 1641-52 was incredibly fractious and complex. For most of the 1640s the Catholics, organised in the Confederate Catholic Association, based in Kilkenny, fought with Parliament- backed Protestant forces and negotiated with Royalist ones for a possible settlement. It was only in 1648 that they joined a pan Royalist alliance aimed at defending Ireland from Parliamentarian invasion (and not without factional fighting in their own ranks over this alliance).

Losing Drogheda, therefore an important port for resupply, to the most anti-Catholic faction of the Civil Wars – the New Model Army – would indeed have been a devastating blow to politically aware Irish Catholics. It was not an irrelevant squabble between English factions.

What was more, Cromwell’s campaign of 1649-50, seizing most of the walled towns in eastern Ireland paved the way for the subsequent incredibly brutal guerrilla war, in which large parts of the country were devastated by Parliamentarian forces.

We might conclude, as Reilly does with some reason, that Cromwell himself did not massacre civilians in Ireland, but we cannot say the same of his successor commanders, Henry Ireton, Charles Fleetwood and Edmund Ludlow. The death toll from their scorched earth tactics in the subsequent years certainly reached into the hundreds of thousands. Furthermore under the Commonwealth regime, the ownership of the land of Ireland passed almost in its entirety to Protestant settlers, a fact that determined perhaps the next two hundred years of Irish history.

If Cromwell became a demon figure in Irish folklore it was not necessarily a result of what he did or did not do at Drogheda but because he personally stood in for an immensely traumatic period in popular memory.

And yet as Tom Reilly would no doubt point out, none of this changes the fact that there is very little conclusive evidence of a civilian massacre at Drogheda. In this limited sense, Cromwell was indeed perhaps ‘framed’.