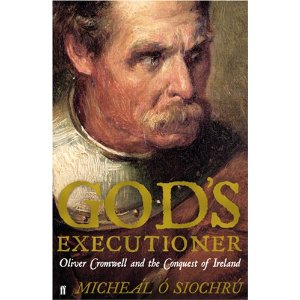 Patrick Fresne reviews God’s Executioner, by Michael O Siochru – an account of the devastating English Parliamentarian Conquest of Ireland in 1649-1653.

The poet Sean O Conaill left no doubts as to the scale of the warfare in mid 17th century Ireland when he described the conflagration as ‘The War that finished Ireland.’

The conflict, more commonly known as the Confederate or Cromwellian wars, has not attracted a great deal of attention by historians in the past century: perhaps the Battle of the Boyne and the Williamite wars has become seen as a more symbolic conflict for the era.

But as O Conaill recognised over three centuries ago, Cromwell’s invasion was a pivotal moment of Irish history. Micheal O Siochru’s book is thus a much-called-for examination of these crucial years of Irish history.

There is little question that O Siochru has produced a strong work. In recent memory, a number of books have been devoted to Cromwell’s time in Ireland, perhaps the last to gain the same level of prominence was Tom Reilly’s controversial Cromwell: An Honourable Enemy. In many respects, O Siochru’s work is a refutation of these more sympathetic accounts of Cromwell’s Irish Campaign, but his arguments are both strong and at times refreshing.

I feel that the only recent major work on this topic that can be compared with O Siochru’s in terms of scale and quality is Scott-Wheelers Cromwell in Ireland.

It is interesting to note the differences between these two writers: Scott-Wheeler, with his background in the US army, did not view the guerrillas known as Tories as being much of a hindrance to the Cromwellians in their advance across Ireland, but O Siochru presents a convincing case that these partisans were on occasion a serious strategic threat to the Parliamentarian invaders.

Notably, Scott-Wheeler & O Siochru do agree on one crucial point. Traditional Irish and British historians of the period have seen the Cromwellian invasion as a one sided conquest, with the conquest of the Parliamentarian regime being the inevitable outcome. O Siochru, like Scott-Wheeler, disputes this view, arguing that the failure of the Irish forces was principally due to the ineptitude of their senior leadership, and that there was nothing inevitable about the eventual Cromwellian triumph.

Historians have seen the invasion as a one-sided conquest. O Siochru argues there was nothing inevitable about the Cromwellian triumph

O Siochru has made an effort to tackle some inaccuracies that have crept into the works of less than rigorous historians. He points out for example, that the Catholic Sack of Magdeburg in the Thirty Years War does not explain Cromwell’s massacre at Drogheda, an argument presented by the Reformation historian Diarmaid MacCulloch in a recent work.

Outside of Ireland, there is still a considerable degree of ignorance about events in Ireland in this period, and it is satisfying to see O Siochru challenge the sort of inaccuracies that inevitably result.

I had a few some minor gripes with O Siochru’s work. He is marginally more sympathetic than most historians towards Heber MacMahon, the Bishop of Clogher who led the Irish Ulster army to defeat at Scariffhollis.

O Siochru blames the defeat in part on Ormond’s failure to support the Bishop sufficiently, but even this little sympathy is perhaps misplaced. It was inappropriate for MacMahon to accept command of the Ulster army; even in 1650, a Bishop leading an army looked outdated, and his position served to antagonise unnecessarily the few remaining Protestant Royalists.

The failure of the senior Irish leadership to tackle the Cromwellian invasion was in many respects a result of this kind of elitist abuse of power.

Another small complaint is that O Siochru is sometimes vague when discussing military actions (Scott-Wheeler is stronger in this regard than O Siochru) But the complaints above are largely exercises in nit-picking.

There have been some complaints that the title of the book sounds somewhat sensationalist, even misleading, though the flip side of the coin is that outside Ireland the book has attracted more attention than would have otherwise have been the case.

To be honest, from memory this is the first book on early-modern Irish history that I have seen sitting on the shelves of mainstream bookshops in Sydney, so the marketing of the book has been very effective. There is a dearth of quality books on Irish history here in general so if clever marketing is successful in promoting works on Irish history abroad then I won’t complain.

One final point that should be made is that, as suggested earlier, O Siochru’s style is closer to the ‘nationalist’ narrative of Irish history than has been fashionable in the past couple of decades. While the language used at times could perhaps be more cautious, O’Siochru’s arguments are solid.

O Siochru’s style is closer to the nationalist narrative than has been fashionable in recent decades; but his arguments are solid

Historians of a revisionist bent have shed a great deal of ink in recent years, sifting through evidence page by page in an attempt to clear Cromwell of charges of atrocity at Drogheda and elsewhere, but O Siochru makes the point that the revisionists basically miss the forest for the trees.

Taken together, the evidence is suggestive that in all probability something awful did happen at Drogheda in the September of 1649, and it is hard to dispute his logic here.

Overall, O Siochru has produced an energetic and memorable work. Although works on Cromwell in Ireland pop up every now and then, in general there is shortage of modern works on this period. We can only hope that O Siochru’s work provokes a few more writers to look at this period in future, and hopefully some of these will be on the less well known aspects of these years.

Patrick Freyne is a resident of Sydney, Australia, and a graduate of the University of Sydney, where he studied Medieval History and English Literature.