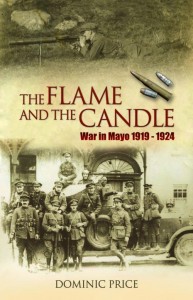 Local studies of revolutionary Ireland are now coming out thick and fast as the centenary of the events of 1913-23 approaches. The wealth of new source material also means that much more can be said than was true even ten years ago.

One of the latest books is this one by Dominic Price on events in the western county of Mayo. The title refers to a quote by William Sears a Mayo TD in the treaty debates of early 1922. Urged by anti-Treaty republican TDs that, the ‘flame of nationality’ must be kept alive Sears responded that the practical needs of his constituents (who formed ‘the candle’) needed some consideration too. A witty title and testimony also to the tension that existed between nationalist idealism and the practical realities of a poverty stricken rural county.

This book is a prodigious feat of research. The author has ploughed through all of the newly opened archives, from the Bureau of Military History to the RIC files in Kew, to the National Army and IRA archives in Dublin and beyond.

The author, (like this reviewer a native of Rathfarnham in Dublin) stumbled onto the subject and pursued it in a private capacity or several years before writing this book – a fact that lends the book a positive tone of a researcher constantly amazed and intrigued by  what he found in the archives. His background as a former FCA (reserve Irish Army) soldier also lends weight to his analysis of military events.

The War against the British

The resulting work has many excellent features. RIC reports tell us the strength of the various revolutionary organisations in the county – surprisingly, by far the largest even in rural Mayo was the ITGWU union. He shows how violence began in Mayo in the form of riots in 1919 (vividly described), followed by wholesale arrests. How the IRB core of the local Volunteers – instructed by Michael Collins in Dublin took escalation a step further by assassinating a local magistrate, John Charles Milling in Westport in March 1919 – an indication of how, in the early stages of the War of Independence, IRA violence was very carefully directed.

Only by understanding the terror paramilitary police exerted in remote rual areas can we understand why IRA ambushes were so celebrated.

Intense local research shows clearly the impact of the deployment of the Black and Tans and Auxiliaries into rural areas. The terror experienced by remote households when masked men in the uniform of the Crown came in the night to arrest, to burn, quite often to steal and sometimes to kill in reprisal for IRA actions is well conveyed. Only by appreciating this does the modern reader understand how successful IRA ambushes – in Mayo at Tourmackeady and Carrowkennedy – where local IRA ‘flying columns’, set up in late 1920 under the powerful personalities of people such as Michael Kilroy and Joe Ring, took on and defeated police and military parties could be so celebrated.

They were hitting back and taking revenge on an apparently omnipotent and tyrannical security apparatus. Mayo’s death toll was not exceptionally high – at 43 according to the Dead of the Irish Revolution study, but the psychological and propaganda impact of such fights was great.

Not that this work is nationalist propaganda. Price shows us how, especially in the truce period the local IRA – often apparently ‘trucileers’ who had joined during the relative safety of late 1921 – carried out a large number of vindictive killings of serving and former RIC men and informers. This from a brigade area that had been most reluctant, even at the urgings of Richard Mulcahy in Dublin, to kill alleged informers during hostilities – an indication also of the decreasing central and even local control over IRA Volunteers as 1922 went on.

The Civil War split, in Mayo as elsewhere was deeply personal. One influential IRA commander Joe Ring, based around south Mayo went pro-Treaty, while another, of Michael Kilroy around Westport went anti. The local IRA gained the very dangerous enmity of Michael Collins’ Squad by hustling them and their chief out of Castlebar in early 1922 when they tried to hold an election rally there. Tom Derrig, a Mayo IRA officer very nearly paid for this with his life when he fell into the hands of Squad men (by now CID) in the Civil War. As it was he merely lost an eye under interrogation in Oriel House.

As for ‘the candle’ or the electorate, in the election of June 1922 they voted ‘overwhelmingly for anti-Treaty Republican candidates’ – though due to the election pact, which in Mayo, unlike elsewhere worked the anti-Treatyites’ favour, some seats were unopposed. As a result of this and more importantly their ascendancy in the IRA, in the subsequent civil war, most of Mayo was held by the anti-Treatyites. For this reviewer this is the best and most revealing part of the book. Fighting in Mayo – as in neighbouring Sligo – was of considerably higher intensity in the civil war than in the war against the British – the paradoxical  result of the IRA’s push to rearm and recruit during the truce.

This book does not include a count of how many died and were injured but it seems very likely to have been higher than in 1919-21. In neighbouring Sligo Michael Farry showed that the Civil War was 3 times as destructive as its predecessor. An embattled National Army commander named Tony Lawlor was charged with pacifying the area but was hampered by the terrain, his own troops’ indiscipline, the tenacity of local republicans and a barrage of criticism from his own GHQ. Republican Michael Kilroy up to his capture in late 1922, was capable of taking and even holding town such as Newport against Free State forces –something that would never have been possible against British forces.

Among the National Army casualties was former Mayo IRA leader Joe Ring, killed along with a considerable number of his troops in a bloody series of ambushes in the Ox Mountains.

As elsewhere the Civil War by its end in May 1923 in Mayo had petered out into a gruesome series of atrocities, reprisals and attacks on property. Price catalogues a number of grimly predictable incidents in which Free State troops shot prisoners out of hand and then submitted reports that the killings were accidental or ‘shot while trying to escape’. Republicans burned out Moore Hall – a Big House – but of a family known as benevolent landlords, who had led the 1798 Rising in the area and one of whose sons had even trained the Irish Volunteers back in 1914.

It was also pleasing to see the election of August 1923 covered, an event which is omitted from far too many accounts of the period. In the two Mayo constituencies, the pro and anti-treaty votes was almost the same, indicating that support for the republicans – many of whom were still imprisoned remained substantial, despite their defeat in the civil war.

The author writes with a refreshing lack of academic grudges and biases. However this also means that one or two areas could do with a little polish. The device of presenting a local RIC Inspector perusing the files to introduce the local nationalist organisations in the opening chapter, for instance does not really work as a storytelling tool because said Inspector then disappears from the text.

Land agitation in a county like Mayo is clearly at the very centre of the revolutionary experience and while the disturbances on the land in early 1920 are well covered – the relationship between this fact and the evolution of republicanism up to and after the 1923 Land Act, is not really followed up. The same goes for the trade union movement. To be fair, though, with the possible exception of Terence Dooley’s, ‘The Land for the People’ and Conor Kostick’s, ‘Revolution in Ireland’, full consideration of what the revolution really meant in social terms is missing from most works of Irish history to date.

And in fairness to Price there are several fascinating nuggets here of what ‘Irish Freedom’ would mean for ‘the candle’. He notes that one of the first acts of the new Irish administration was to close down the hated workhouse system – associated forever in popular memory with the horrors of the famine and evictions – but that they were partially replaced with the now infamous ‘Magdalene Laundries’ where unmarried mothers and other ‘fallen women’ were virtually imprisoned by Church and state.

He concludes the book with a melancholy account of the 1924 re-interment in Donaghpatrick of Mayo IRA man John Maguire executed in Tuam, County Galway, with 9 others during the Civil War. The 20,000 mourners were told, ‘these young boys laid down their youthful lives that Ireland might be free’. ‘The graves then closed’, Price writes, and the thousands departed to return to their families, friends and the quiet reflection of their own thoughts’.

See another review in the Mayo News here.