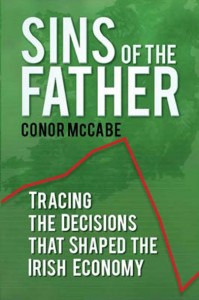 On the 15th October the Ireland Institute on Pearse Street played host to the second annual Raymond Crotty lecture, which was sponsored by the People’s Movement.  The topic of this year’s lecture was Rancher and Banking interests in the modern Irish Economy and was delivered by Conor McCabe.  (Audio of the lecture available here) McCabe’s recent book, Sins of the Father, is an examination of the Irish economy from the Anglo – Irish Treaty up to the present day.

There have been many books released in recent years that deal with the collapse of the Celtic Tiger and the present recession but McCabe’s book shows that rather than being an unforeseen catastrophe caused by greedy bankers and speculators the present crisis is the natural culmination of an economic system in Ireland that has always placed the needs of vested interests, such as the ranchers and bankers, above the needs of the Irish people and the Irish economy as a whole.

McCabe began his lecture by playing a clip from the critically acclaimed US drama series The Wire.  In the clip, two detectives discuss a case where a local senator is being investigated for financial corruption.  The older detective states that the objective is not just to prosecute the senator but to see how far up the ladder the corruption goes and to follow the money trail.  McCabe tied this to the Irish economy by talking about the present obsession with individuals such as Seán Fitzpatrick and Michael Fingleton.  Rather than concentrating on a couple of bad apples we should be looking at the entire financial system that let individuals such as these wreck the economy.

While the lecture dealt with the agricultural and financial aspects of the Irish economy during the twentieth century, Sins of the Father also covers the housing and industry sectors and concludes with a chapter on the bank guarantee and the bailout.

The main export of the Irish economy during much of the twentieth century was live cattle and this was sent overwhelmingly to Britain.  McCabe argued that rather than thinking of the 26 Counties as a ‘Post – Colonial’ or backwards economy the state was hardwired into the overall British and Irish economy.  The state’s primary role was to supply live cattle to the British and this was not challenged by successive Irish governments.

The issue of land distribution was always a contentious subject in Ireland and rather than thinking of the problem as a conflict between the Irish peasantry and the landlords or the British government, the conflict was more heated between the small farmers and rural labourers on one side and the large farmers and graziers on the other.  Despite the British government’s land acts of the late 19th and early 20th century, the land issue was still a major concern during the Anglo – Irish War and the Civil War.

One of the first major decisions the new Cumann na nGaedheal government undertook was the Land Act of 1924.  Most of the new farms created averaged around 22 acres and this did nothing to challenge the system where small farmers would raise cattle and then sell them on to fatteners and graziers to prepare them for export.  In 1936, J.J. Waddell, the chief inspector of the Land Commission had argued that the minimum requirement for sustainable farming was 32.5 acres.  The small farmers took all the risk in this situation while the ranchers saw all the return.

In 1952 the American consultancy firm IBEC was commissioned by the Irish government to write a report on the Irish economy and to make recommendations for the future.  The report highlighted the bizarre situation where Ireland was exporting live cattle and the British economy was seeing the benefit of subsidiary industries such as meat processing and tanning from Irish cattle.  The report wondered why these factories were not located in Ireland, with the subsequent growth in employment and the wider economy that this would bring.

McCabe also dealt with the banking and financial sectors in the Irish economy.  In 1927 Cumann na nGaedheal abdicated monetary policy to the private banks.  The banks believed in tying the new Irish Punt to sterling and the two currencies held parity until 1979.  While this was beneficial to the shareholders of the private banks it had a devastating impact on the economy.  Decisions regarding valuation of the currency were taken in London and the Irish government had to follow suit regardless of whether this would be beneficial to the Irish economy or not.

McCabe believes that the parity link, ‘played no small part in the decades of poverty and emigration which were inflicted on the majority of the population.’  The alternative to this policy, which was affordable credit to boost indigenous growth but a weaker Irish pound, ‘was strenuously opposed by both Irish banks and the Department of Finance.’

The change of government in 1932 saw Fianna Fáil undertake a more interventionist approach to the economy.  There were significant improvements in areas such as housing, slum clearance and domestic manufacturing but their decision not to break the parity link with sterling was deciding, ‘to fight with one fiscal arm tied behind its back.’

The lecture was followed by a lively questions and answers session.  Sins of the Father is a very important work and hopefully it will find a wide audience.

Readers will find the book both exasperating and infuriating but the issues raised in it are absolutely essential if Ireland is to create a sustainable and democratic future out of the present crisis affecting the country.  The book is very well researched and despite the complexity of its subject matter is quite easy to read.  While McCabe, deliberately, doesn’t offer any solutions this book should form an important part of the debates and discussions that the Irish people should be undertaking at the moment.

10 Responses to "Review: Conor McCabe on Banker and Rancher Interests in the Modern Irish Economy"