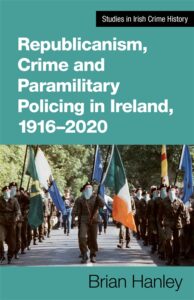 This book is the first in a new series launched by Cork University Press on ‘studies in Irish crime history’. They have enlisted historian Brian Hanley for the first volume, which deals with the involvement of armed Irish republicans in  crime and its prevention in twentieth century Ireland.

Hanley is well qualified for the role, having written extensively about the IRA’s history before in a series of book that range from the pre-First World War Fenians through the IRA of the revolutionary period and beyond, to the Official and Provisional IRAs of more recent times. Hanley has always exhibited an interest in the murkier doings of the republican paramilitaries and their interaction with organised crime, both at home and abroad.

The notion of physical force republicanism’s relationship with crime is a muddy one, requiring some thought about what ‘crime’ means. If crime simply means breaking of the existing laws of the state, then obviously all armed anti-state republican organisations were guilty of it. And indeed their state opponents would insist that this was so. The British government of 1920s  called the IRA of that era a ‘murder gang’ and the Irish Free State characterised the ‘irregulars’ as representing in Kevin O’Higgins’ words, ‘less of a war properly so-called and more a situation of armed crime’ . British Prime Minister Margaret Thatcher insisted during the 1981 Hunger Strikes that ‘crime is not political, it is crime’.

Republicans would answer that their struggle was not for selfish material gain but for selfless political ends. They would point to those from various eras, from Terence MacSwiney down to Bobby Sands, who gave their lives for the cause, as criminals who wished to profit from their actions would never do.

Accepting the validity of such sentiments would again of course, vary depending on the relationship of those persons with the established political power.

Many of those who mourned MacSwiney, the Mayor of Cork’s death on hunger strike in 1920 in British gaol had nothing to say about the death of his fellow Cork man Dennis Barry on a similar protest in Free State imprisonment in 1923. And many of those of the Fianna Fail tradition who still revered the likes of Barry did not consider Bobby Sands and his comrades to be legitimate heirs of the republican struggle.

But the question is not only a polemical one. If insurgency for political ends is, as Irish republicans always insisted, excluded from ‘crime’, then what about actions such as ‘fundraising’ robberies, extortion or cooperation with ‘ordinary criminals’ for the purposes of raising finance? Throughout the twentieth century, Irish republicans engaged in or preparing for armed campaigns took part in such activities.

While a dispassionate view would suggest that all insurgencies engage in raising revenue illegally as a form of ‘primitive state building’, the line nevertheless may blur considerably between raising money by such means for ‘the cause’ and for personal gain.

Hanley takes us on a journey from the ‘policing of the revolution’ in which the IRA of the War of Independence era enforced the rulings of the Republican Courts, often taking on armed criminals as well as ‘land grabbers’ and petty criminals in the process, through to the Civil War when the (anti-Treaty) IRA itself carried a great many bank and post office robberies. These raids had also occurred during the War of Independence but exploded after the Treaty split, when the pro-Treaty faction had access to state funds and the anti-Treaty did not.

As may be expected, while most of the money taken in such robberies did make its way to the funds of the anti-Treaty IRA, quite a bit did not and remained in the hands of those who stole it, leading to some dissension in the guerrilla army.

In the wake of the Civil War, we find, the IRA for a time disavowed robberies as damaging to their reputation. The need for fundraising was for a time obviated by funding from the Soviet Union (a temporary marriage of convenience more than an ideological alignment).

However, their existence in a mostly illegal environment in this period meant they could not avoid contact with the criminal  world. Hanley takes us through the IRA of 1920s and 30s relationship with crime in that era including their sometimes deadly confrontations with Dublin’s ‘Animal gangs’.

However in the 1940s, the IRA once again turned to armed robbery as source of funds – leading to a number of armed confrontations with the Gardai. This has been blamed for their lack of public support. As Hanley remarks, the IRA of that era’s lack of popularity had as much to with its incoherent policy – attempting armed actions against both southern and Northern Irish states while at the same time flirting with Nazi Germany and encouraging them to mount a landing in Ireland – as it did to do with post office and bank raids. But the shootouts with southern police during armed robberies certainly did not help their reputation in the eyes of the nationalist public.

Thus, part of the IRA’s new strategy after the War years was again to disavow robberies and also to prohibit armed actions against ’26 county forces’.

This did not begin to change until the late 1960s when various splinter groups, notably Saor Eire began again to carry out armed bank robberies. After the onset of the Northern Ireland conflict, both Provisional and Official IRAs as well as others such as the INLA carried out such robberies regularly on both sides of the border. On its southern side, the IRA order against firing on the Irish state’s forces remained in place but was sometimes ignored. This ultimately led to the Irish Army routinely escorting cash in transit during the ‘Troubles’.

This coincided, Hanley notes, with a steep rise in ‘ordinary’ crime south of the border, though he does not rule on whether this was rooted in imitation of republican activities or broader societal changes.

Perhaps the most interesting chapter concerns the republican organisations in the North and their construction of durable fund raising infrastructure in the form of collecting money from building firms who in turn were subsidised by the British government, especially for the construction of roads. This, as well as running illegal drinking clubs, was a much more stable revenue stream than armed robberies, though the latter continued north of the border throughout the conflict there. Indeed, the largest bank robbery in Irish history to date, the Northern Bank robbery, of December 2004, took place well after the Provisional IRA ceasefire of 1997 and just before the organisations decommissioning of weapons in the summer of the following year.

Hanley notes ,though refrains from commenting on, the various theories behind the Northern Bank heist. Among these are the idea that it was done in order to fund a form of redundancy payment to operators and activists who would soon be ‘unemployed’ .But Hanley also also quotes a republican source as citing the robbery to show that the IRA could still mount well planned operations should the peace process sour.

One of the persistent allegations against republican paramilitaries during the latter part of the Northern Ireland conflict was that they profited from the drug trade, which arrived in Ireland in a major form in the 1980s. Republicans would respond that they in fact resisted drug criminals more than the actual Irish state.

Hanley shows that though the Provisional IRA did engage in a number of shootings in support of Dublin’s anti-drug  (in reality anti-heroin) movement in the 1980s and 90s, their leadership always viewed this activity as a distraction from the ‘war effort’ in the North.

It seems clear that despite the persistent allegations, republicans, apart from small groups such as the IPLO (a mostly Belfast based split from the INLA) did not engage directly in drug trafficking. Whether the IRA did though, as was alleged, ‘tax’ certain drug traffickers to allow them to continue operating is a question to which we may never definitively know the answer.

As well as engaging in crime however, republicans, especially in the North, did also try to prevent it, often through direct and brutal methods such as punishment beatings and ‘kneecappings’. Hanley devotes some space to this phenomenon, which he notes was often the product of demands from local communities after the Royal Ulster Constabulary had effectively been forced out of various areas as a normal police force.

The final chapter ‘blurring the boundaries’ deals with the various groups, post process, calling themselves the IRA or other titles and their involvement with organised crime. The IRA of various eras had always had dealings with organised crime, particularly to develop arms smuggling networks, from London criminals of the 1920s to Boston gangster ‘Whitey’ Bolger in the 1980s.

However the more recent ‘dissident’ groups seem to have become embroiled very directly in gangland feuds, particularly in Dublin. As Hanley notes, due to their small size and less formidable strength, these factions now sometimes find themselves outgunned by organised crime in a way that previous generations of republican paramilitaries rarely were.

This is an interesting, slim volume that is intended as a primer for those who wish to look into the relationship of republican paramilitaries with crime. It will be useful as reference for this question at various points in Irish republican history.

As a short book however, it perhaps does not have the space to consider the import of various questions. What was the IRA’s own conception of ‘crime’ over various eras? On what basis did they act as a ‘police force’ both in the War of Independence and the Troubles? What kind of law or social norms did they think they were enforcing and did these norms change as the IRA’s own ideology changed over the years? Why, equally, were some robberies or forms of extortion deemed legitimate and others not? How did these perceptions interact with the views of the wider Irish public? Was republican ‘crime’ seen as black mark against it or as a from of ‘social banditry’ against an unjust state? And how did these perceptions change over time? Grappling with such points will have to wait for a longer study.

There is also a tendency to list out incidents that could at times have been profitably summarised and analysed rather than simply recounted.

But overall this book is a very good start to this series from Cork University Press and demonstrates  Brian Hanley’s deep knowledge of the inner workings of armed Irish republican groups over the 20th and 21st centuries.

Also: Listen to our Podcast with Brian Hanley on Republican Policing during the Irish revolution.

If you enjoy the Irish Story and wish to support our work, please consider contributing at our Patreon page here.