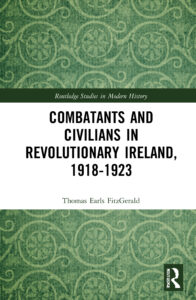 I would firstly like to extend my thanks to John Dorney for his careful, measured and thoughtful review of my book.

The Irish Story over the years has become a vital resource for understanding modern Irish history.

In relation to revolutionary Ireland the site has fostered and indeed lead much of the discussion on the period. John should also be applauded for encouraging younger scholars and publishing their work on the website.

In a time when history is becoming increasingly rarefied and difficult to access those with an interest in Irish history should be grateful to the Irish story for making debates and discussions on Irish history accessible to all.

With that in mind I would like to respond to a number of points John Dorney has made in his recent review, with a view to hopefully generating further good natured discussion and debate.

Dorney specifically queries my take on issues related to British violence, popular support for the IRA and conservatism evident in the Irish revolution – all of which I will address briefly in turn.

Firstly, in relation to my conclusion that British paramilitary violence should be understood in the context, and indeed be seen as similar, to contemporary European conservative paramilitary forces in Germany, Italy and Hungary. Dorney queries that those continental European forces all had a unifying ideology whereas the Black and Tans were largely unemployed ex-servicemen motivated by material rather than political concerns.

Dorney also argues that if there was a conservative underpinning to British violence then why did the regular British Army not engage in reprisals. I would contend that this was because the Black and Tans etc, like their continental colleagues operated in loosely disciplined make shift military structures operating on initiative and opportunity as opposed to the disciplined and order bound nature of the regular army.

However, regular British troops in Ireland were often implicated in reprisals through either active engagement, assaults, looting etc and in instances such as the siege of Tralee in November 1920 by clearly turning the blind eye. The fact that the regular army were often in a position to prevent reprisals from reaching the excesses they did but chose not I find to be deeply telling.

However, I find the term reprisal unsatisfactory. As my book shows the violence conducted by Black and Tans in County Kerry in the Summer and Autumn of 1920 was often largely unprovoked. Creameries that were burned, shops looted and people assaulted in this period were largely random and not in reaction to a specific IRA attack – though often the victims had links to the republican movement.

It could be argued that the logic behind this was driven by a counter-insurgency tactic of ‘hitting the ground running’ by effectively attempting to supress and discourage any Volunteer from considering engaging in any act of lethal violence.
However, I feel that if you actually consider and evaluate the nature of the violence a clear political rather than strictly military dimension is evident. Sinn Féin posters, leaflets, flags, images of the 1916 Leaders, Irish language shops signs were all viciously attacked and not only that but people were made make declarations of loyalty to the crown, sing God Save The King, burn the tri colour etc.

I contend that this violence has a striking resemblance to that of the Italian fascist Squadristi who also would literally physically destroy anything they felt had some left wing tinge – printing presses, trade union halls etc.

Historians have recently written of considerable levels of fear existing amongst conservative elites and servicemen post November 1918 – fear of an unknown left wing threat that would shoot them in the back, and fear that the society and way of life they had fought to protect in the trenches of 1914 -18 was being taken over by ungrateful, utopian Bolsheviks. And that fear generated excessive and unprecedented levels of destruction in urban centres across central Europe post November 1918.

If we now turn to British forces in Ireland – I would argue a similar picture emerges. Unlike France where historians have noted that a strong narrative of national defence came to define how French people interpreted the sacrifices in World War 1 but that no such narrative existed in post war Britain. Britain was never under any real threat of a German invasion. Accordingly, while material reasons certainly would have attracted many into joining the Black and Tans the fact that so much violence was unprovoked and often targeted anything that suggested a culturally nationalist or republican tinge is again telling.

Hatred, frustration and contempt are clearly evident in these actions – and do suggest motivations driven by a hatred of or perhaps even fear of Irish separatism as a threat to Britain itself. Together with the anger of being in a society they considered British but where many people in Ireland did not appreciate or identify with British sacrifices in the First World war.

The levels of destruction and violence, together with how this violence can be interpreted places the Black and Tans etc in the same camp as continental conservative paramilitaries.

Regarding the question of popular support for the IRA – this is obviously the age old question which no historian will ever provide a definitive answer to.

I don’t think my book suggests that the IRA did not have a certain level of support – particularly from within their own families. However I also consider the fact in later testimony so many IRA veterans often expressed feelings of vitriolic contempt for the large number of civilians who wanted nothing to do with their war important. Indeed, Kerry IRA man Seamus ‘Jimmy the Master’ O’Connor in his excellent memoir Tomorrow was another day: the Irreverent memories of a rebel school master went as far as to suggest that most people simply did not support the IRA – thanks to poverty, fear of Britain and the influence of the constitutional nationalism.

The fact that the Irish state was founded by veterans of the physical force tradition and particularly due to the long dominance of Fianna Fáil which instilled a deep respect for the 1916-21 years in subsequent generations,( and indeed arguably with the more recent popularity of the Decade of Centenaries programme) – there has perhaps been a desire to claim the physical force revolution as having a popular mandate. Whether people voted for ambushes and violence in 1918 is up for debate.

However, the state’s and society at large’s clear identification and endorsement of the IRA of that period sits rather oddly with the relatively small number of people who were actually willing to engage in lethal violence for the Irish Republic between 1919-21, and indeed more strikingly again with the very low number of active IRA fighters in the 1922-23 civil war.

It may be as my colleague Brian Hughes has suggested that in violent guerrilla conflicts most people simply want to be left alone and keep their heads down to avoid trouble.
It may also be that other forces besides the IRA generated more popular support and mobilisation – the Dáil courts, agrarian action, trade unions, and involvement in the anti-conscription movement.

Indeed, while many in principle may have supported violent insurrection this also would have existed alongside a fear of British retribution. Indeed, there are a number examples of civilians pleading with the IRA to conduct ambush away from their own homes – simply from fear of experiencing the wrath of the Black and Tans. And also of IRA leaders actively not engaging in violence for fear of violent retribution from the forces of the British state on their own communities.

Finally regarding the question of conservatism which is central to the book and indeed my own interpretation of the period. Sean O Faolain in the 1966’s the Rocky Road to Dublin lamented that the republican dreams of his youth were perpetually crushed first by the First Free State Government and eventually again by Fianna Fáil. ’32 became much like 22’ in O’Faolain’s memorable phrase.

In this rather enticing narrative blame for the failure of the revolution and independence rests solely with Cosgraveite mediocrity and Devalerian malaise. However, I would argue that the unique blend of conservatism, Catholicism and nationalist populism which permeated the state simply reflected the views and values of most people in Ireland well up until the 1970s rather than something imposed from above.

And while the revolution did contain socially radical elements – and saw huge growth in the trade union movement and of the Labour Party – the conservatism of the new state was also foreshadowed by the revolutionary period.

Recently scholars such as Mary MacAulliffe and Linda Connolly have highlighted the uncomfortable and disturbing prevalence of young women having their forcibly cut off for having some association with British soldiers or police. Again while it could be argued that this had some military logic in terms of both isolating the incumbent forces and civilian community from one another it could also be seen as a very visible and symbolic act of public shaming of women.

These women were effectively being exposed to shame and ridicule for stepping outside established norms and effectively cast out of the new emergent Irish nation. Perhaps, a forewarning of the treatment of women in the independent Ireland?

But to get to the issue addressed in regard to policing and land. As Dorney notes the issue is complex – and I certainly don’t want to give the impression that republicans imposed a monolithic conservative uniformity.

As Dorney notes in 1917 and 1918 the early resurgent Volunteers were often responsible for cattle drives and other acts of agrarian agitation. Indeed, some Volunteers, not acting on orders engaged in agrarianism beyond this point. However, by 1920 – with the RIC in effective retreat from much of rural Ireland and when a sharp rise in agrarian agitation occurred – a phenomenon the Sinn Féin movement were increasingly uncomfortable with. In response the republican movement with, at least in Kerry, sided with landed interests and actively suppressed agrarian agitation.

This does not mean siding with the vestiges of the Anglo Irish gentry but rather those farmers who had benefited from the various land acts of the late 19th and early 20th centuries .

My book notes that by and large at republicans endorsed a vision of some ‘plain person of Ireland’ who was neither too rich but also crucially not too poor either. The Sinn Féin movement, in tradition with late 19th and early 20th century separatism, largely but not entirely considered rural poverty and organised labour as distraction from the national question – or considered that these issues would be resolved once the British had left.

In conclusion I again would like to thank John Dorney for his review and to stress that this is not meant as a criticism but rather as Dorney notes that these are important questions that are worthy of discussion, debate and sometimes disagreement.