On December 5 2019 at Cathal Brugha Barracks, the Irish Military archives did something very unusual for an army; they made open an archival collection related to a mutiny.

That the mutiny took place nearly 100 years ago does not make it less significant.

In March 1924 about 50 officers of the Free State’s National Army, who were set to be demobilised in the post-Civil War reduction of the Army, seized weapons and abandoned their posts. Led by erstwhile Army Director of Intelligence Liam Tobin and Charles Dalton, they delivered an ultimatum to the government, demanding that the Army Council, headed by Richard Mulcahy, resign and that they and their associates be given prominent commands.

The Military Archives has released the papers of the Army Inquiry of 1924.

They also demanded that the Army be purged of former British Army officers and that progress be made towards Michael Collins’ ideal of an all-Ireland Republic. Some contacts were made with interned anti-Treaty IRA prisoners to make common cause against the Free State government, though they were generally rejected by the anti-Treatyites, Civil War wounds being very fresh at the time.

Today the mutiny is often dismissed as a mere farce. These were however very dangerous men. Most had served in Collins’ IRA Squad and Intelligence Department in the War of Independence.

In 1924  a group of about 50 National Army officers abandoned their posts, seized arms and delivered an ultimatum to the Free State government.

In the Civil War they were again to the forefront in bloody work, leading the open combat against the ‘Irregulars’ (as they termed the anti-Treaty IRA) and many were also implicated in atrocities such as the killing of prisoners in Dublin, Cork and Kerry.

Diarmuid Ferriter, writing in the Irish Times, has voiced the opinion that the mutineers, due to be demobilised on Chief of Staff Richard Mulcahy’s say so, might deserve some sympathy. Many had served throughout the revolutionary period and were now being ‘thrown to the wolves’.

This may no doubt be true of the average demobilised soldier. However the mutineers of 1924 had been ousted from top commands in the Army in late 1922 by Mulcahy for a good reason. Much of their behaviour was brutal and erratic and Tobin and Dalton as heads of Intelligence often refused to share intelligence with the Army command.

They and their followers were mostly put into out-of-the-way jobs in the Army for the remainder of the Civil War. Mulcahy replaced them largely with men he could trust, often like him, from the Supreme Council of the Irish Republican Brotherhood.

British officers, contrary to the mutineers’ claims, while certainly recruited for their organisational expertise, were rarely appointed to high ranking positions. ‘Tobin’s crowd’ as they were known in the Army, in response to their ouster, formed their own faction within the Free State military, the ‘Irish Republican Army Organisation’ (IRAO).

They had the backing of Joe McGrath the Minister for Labour, who was also head of the Free State’s clandestine armed forces based at Oriel House, the Criminal Investigation Department, the Citizens Defence Force and the Protective Corps.

Rivalry between the two factions (Mulcahy’s IRB and Tobin’s IRAO) came to a head in March 1924 when Army head of intelligence Michael Costello, having listened to Tobin and Dalton’s telephone calls, concluded that they were planning a military coup, including the assassination of several leading government ministers.

Costello and other members of the Army Council, ordered the arrest of the head mutineers at Devlin’s public house on Dublin’s Parnell Street. Shots were exchanged, some of the mutineers were arrested and others went on the run.

There is a strong case that this action, to which Mulcahy gave his blessing, saved the Free State from further bloodshed and maybe even a second round of Civil War.

And yet when the Government got wind of the action, they pardoned the mutineers, but demanded the resignation of Mulcahy and the Army Council.

The Army Inquiry, opened in full for the first time now by the Military Archives, had a remit not to investigate the mutiny but rather the alleged mismanagement of the Army and the Civil War by Mulcahy and his colleagues and their fostering of a secret society, the IRB, within the military.

This rather odd result of the mutiny was the product of the longstanding rivalry between Mulcahy and his cabinet colleague Kevin O’Higgins, the Minister for Home Affairs. O’Higgins saw himself as the champion of civilian rule and legality, under threat, he contended, not only from the ‘irregulars’ but also from Mulcahy, a potential military dictator in the making. Mulcahy and his colleagues duly resigned and faced the humiliation of a grilling by O’Higgins and others in the Army Inquiry.

The mutiny was quashed by the prompt action of Director of Intelligence Michael Costello, but Richard Mulcahy and the Army Council were forced to resign.

O’Higgins allegations were not completely without substance. Michael Collins had certainly thought that the IRB could exert hidden power on Irish society after independence through control over both the military and civilian government. Mulcahy and his colleagues Sean O Muirthile and Diarmuid O’Hegarty may well have thought the same.

Nevertheless, there is no doubt that the mutineers of 1924 posed a more immediate danger to the nascent Irish democracy that the Army Staff or the IRB did, yet O’Higgins was willing to pardon them apparently without discomfort. Oddly many of the mutineers later reconciled not with the pro-Treaty party of O’Higgins but with their civil war foes in Eamon de Valera’s Fianna Fail. Liam Tobin for instance, the leader of the mutiny, was later made clerk of the Dail by de Valera.

Both Mulcahy and O’Higgins claimed to be acting in the interests of Irish democracy, but the affair can also be seen as a rather sordid scrambling for power and positions within the Free State establishment at the end of the Civil War.

As Colonel Tom Hudson remarked at the launch of the collection, the long term result of the affair was that all Irish Army officers since have had to swear not become members of any secret society and the Army has never since attempted to interfere in civilian politics.

Much of the Army Inquiry has previously been accessible in Richard Mulcahy’s papers in University College Dublin. Now however for the first time, it is available to view in full in the Military Archives at Cathal Brugha barracks in Dublin.

The collection contains five sections; the cabinet papers related to the Inquiry, the testimony and cross examination of dozens of serving and former army officers (though, notably, not the mutineers themselves), the report of the committee and a collection of press releases related to the events of 1924.

I have not had the opportunity to view the collection in full as yet, but going by the partial collection available at the Mulcahy papers, which I viewed as part of the research for my book The Civil War in Dublin, the Army Inquiry is a fascinating source, not only on the Army Mutiny but also on the Civil War itself.

The Army Inquiry is an invaluable source, not only into the events of 1924, but also into the National Army and the Civil War.

In it are contained startling revelations on the foundation and conduct of the Army. Colonel Charles Russell, for instance says of Collins’ Squad and Intelligence men that they were ‘shock troops’ of the pre truce IRA, but that ‘If shell shock existed in the IRA, the first place to look for it was among these men’. And he says they were not disciplined during the Civil War because they were simply ‘too dangerous’. He recalled that they spent most of 1923 drinking and plotting in Griffith Barracks and occasionally shot at officers who tried to discipline them.

Sean O Muirthile off-handedly tells the Inquiry that Collins consulted the IRB Supreme Council on the Treaty negotiations before telling the cabinet headed by de Valera. While Mulcahy refuses to tell the Inquiry of IRB business as ‘there are confidences which I must keep’ in a secret society.

Even the Army’s commanders are grimly realistic about its limitations. Richard Mulcahy testifies that ‘To put matters bluntly every criminally disposed person had a gun from the Government or Mr de Valera and needless to say Government service on account of pay was more attractive’. 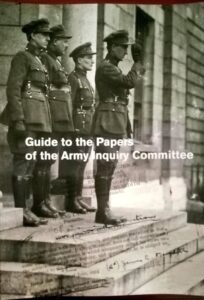 Sean McMahon states that the Army had to be built overnight and that ‘the recruits standard was often not of the best’. ‘They had to be rushed into position before even being uniformed, to say nothing about being trained’ and some were ‘taught the mechanism of a rifle on the way to a fight’.

The collection is also an invaluable source on the National Army’s misdeeds such as the killing of prisoners at Ballyseedy in Kerry in 1923 or the Kenmare Case late in that year, in which a group of officers savagely beat two young women.

However it would be wrong to end this piece with the implication that the Inquiry offers a damning condemnation of the National Army and its commanders. Most believed that they had saved the Irish Free State from anarchy and collapse in 1922 by taking on the anti-Treatyites on behalf of what they saw as the legitimate, elected Irish government.

Sean MacMahon the Army Quartermaster General, who was among the Army Council members who was forced to resign over the mutiny, testified proudly about the opening battles of the Civil War when the existence of the Free State appeared to hang in the balance. Every available man had to be mustered, he recalled and there was no relief, so that men stayed at their posts until they collapsed of exhaustion. But ‘the dash and bravery of most of the officers brought us through’.

The full opening of the Army Inquiry papers will no doubt contribute further insights into the dark but formative period of the Civil War and is to be warmly welcomed.