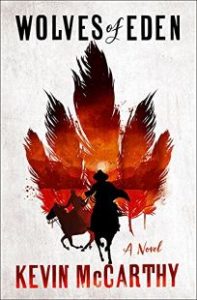 Kevin McCarthy came to the attention of the Irish Story some years ago for for his novels, first Peeler, set in the Irish War of Independence and subsequently Irregulars, set in the Civil War.

For his latest work, McCarthy has taken a leap of time and place, out of Ireland and the 1920s and into the American frontier in the 1860s. We follow the tale of two immigrant Irish brothers, Michael and Tom, who, after fighting on the Union side through the American Civil War, re-enlist out of economic necessity to fight the Sioux and Cheyenne in what is today Wyoming and Montana. The culmination of the book is the ‘Fetterman massacre’ of 1866, in which 81 US soldiers were killed in battle with the native Americans.

The core of the book, however, is not the politico-military story of the frontier war – Red Cloud’s War – but rather a more intimate tale of murder and injustice. The brothers are suspected of killing an unscrupulous trader and brothel-keeper at the military base at Fort Phil Kearny and are pursued unenthusiastically throughout the story by an alcoholic Irish cavalry officer but with great zeal by his German-Jewish batman, sergeant Kohn.

While in one way a major departure from the historical themes of Kevin McCarthy’s previous work, there are some continuities between Wolves of Eden and Peeler and Irregulars. Like Sean O’Keefe, the protagonist of his previous books, McCarthy’s protagonists here are all burned out war veterans, inwardly traumatised by their experience of combat, though here it is the American Civil War rather than the Gallipoli campaign as in O’Keefe’s case. Here again, like O’Keefe, the troopers in Wolves of Eden come home from a colossal and terrible war, only to find themselves caught up in a different kind of war, smaller scale, but in its own way far more personal and vicious.

In a broader sense, all of McCarthy’s novels seem to deal with the problem of the outsider, who cannot fit into the society he is in, whether through culture or past trauma. Here, the brothers, (they re-enlist under the fake name O’Driscoll) are not only brutalised war veterans, they are also, as unskilled Irish speaking immigrants, at the bottom of the social pile and they know it.

As with McCarthy’s previous novels, this, as well as murder mystery, deals with the legacy of war, trauma and dislocation.

In civilian life they are exploited as unskilled farm labour; in the Army they are ripped off by dishonest traders and NCOs at their remote post. The same is true of their main pursuer, Kohn, who is constantly faced with anti-Semitic prejudice and Army red tape and of his superior, Molloy, who is busily trying to drink himself to death to forget the horrors of the Civil War.

All are foreigners in America and pepper their speech words from other languages; Irish and Yiddish.

As for the Sioux and the Cheyenne, they remain an unknown quantity; ‘savages’ to the soldiers, glimpsed only rarely, who kill and mutilate their friends. This is probably as it should be. It would be fanciful to expect a meeting of minds among adversaries in such a context. However, as Michael, the some-time narrator, remarks more than once, if he were in their position, he would be fighting as they were, to preserve their own lands and way of life.

I am less well qualified to do as I did with Peeler and Irregulars and to speak of the historical authenticity of Wolves of Eden. But from what I can tell, it seems to at least capture the authentic atmosphere of Red Cloud’s War 1866-68.

The war was caused by the migration of European settlers across (rather than into) Sioux and Cheyenne lands, along the Bozeman trail towards the gold fields in America’s north west.

The migrants disrupted native hunting grounds leading to the Sioux and Cheyenne mounting attacks on their wagon trains. This resulted in the US government, in the aftermath of the Civil War, establishing a number of forts in the district in an effort to protect them, which in turn led to all out war between the soldiers and the ‘hostile’ plains tribes.

The Sioux under the chief Red Cloud actually won the war, forcing the US Army to evacuate its three forts in the Powder River Country in 1868 as part of a treaty at Fort Laramie.

Up to half of the US soldiers who fought in the Plains Indian Wars were Irish.

In a historical note at the back of the book we learn that the US Army that fought the Plains Indians (as they were called at the time) was up to 50% Irish and much of the remainder was composed of other first generation immigrants; the career of a soldier in the post Civil War Army being very much the last resort for those without other marketable skills. And like the characters in the novel, they had to pay for their own uniforms and supplies out of their meagre wages.

If that were not enough, it turns out it is true that, as is depicted in Wolves of Eden, post traders, who were granted a monopoly by the US government to sell produce to soldiers on isolated forts, typically charged them extortionate prices for poor quality goods. Even if he never met a hostile Indian, the life of a frontier soldier must have been a miserable one.

The eerie existence of the isolated frontier fort and the savage nature of frontier warfare (on both sides) is well evoked in Wolves of Eden. Between the closing in of Kohn on the murderers and the steady escalation of the war with the Sioux, tension is ratcheted up throughout the second half of the book before reaching a bloody crescendo in its final act. The book flies along at good pace and is certainly recommended as a good and satisfying read as well as an insightful and poignant portrayal of Irish immigrants in the 19th century wars for America.