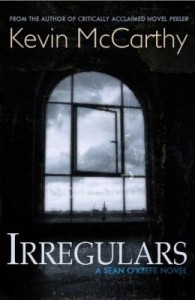 Available here from the publishers.

On October 7 1922, about 3 months after the outbreak of the Irish Civil War, three teenaged members of the Fianna, the IRA’s youth wing were picked up National Army troops under Intelligence Officer Charlie Dalton putting up republican posters on Clonliffe Road in north central Dublin. The three were taken to Wellington barracks, though the register for them being admitted for interrogation later went missing. The following day the bodies of the three youths were found in a quarry in Clondalkin, killed by multiple gunshots at close range.

Dalton was arrested for the killings but evidence went missing, the jury may have been intimidated at the inquest and in the end, a verdict of ‘killed by persons unknown’ was returned. Dalton was back at his duties within a month, only to be later sidelined and eventually forced to resign for a threatened mutiny in 1924.

I start this review of Kevin McCarthy’s novel, ‘Irregulars’ with this anecdote in order to show that, however vile and hopeless is the civil war era Dublin he imagines, it is hardly a fantastical creation. McCarthy’s novel is based around the story of the three Fianna members, but the version he imagines is if anything even more sordid than the reality. The son of brothel keeper, who has joined  the republican guerrillas (labelled by their foes, ‘Irregulars’) goes missing after a double cross when the anti-Treatyites try to buy arms. A Free State CID detective is stabbed in the affray and two teenage boys, picked up by an Army officer named Charlie Dillon, end up in the city morgue, tortured and shot in the head.

Enter Sean O’Keefe, the hero of McCarthy’s previous novel, Peeler, a demobilised RIC man, now working for the brothel madam whose son is missing, to find the missing teenager. Even more than the West Cork of Peeler, the Dublin of Irregulars is a bleak and world weary place. O’Keefe is a haunted veteran of both Gallipoli and the ‘Tan War’. The Civil War is presented as incomprehensible episodes of extreme violence that erupt suddenly and unexpectedly into everyday life. Which no doubt is how many ordinary people indeed experienced it.

Alongside the clashes of Free State and Republican fighters, there is a general air of anarchy. A crew of freelance ex Black and Tans stick up banks, but end up meeting a nasty end when they run across a republican bank-robbing squad knocking off the same bank. Several of the killings in the book are carried out by a terrifying urchin by the name of Jeremiah Byrne – unaffiliated to – indeed virtually unaware of either side.  This again, the breakdown of law and order, really was a salient feature of the civil war period.

No one is likely to mistake Irregulars for a factual account of the period but the atmosphere feels authentic and the as a detective story it is a gripping read.

If anything I thought Irregulars understated the degree to which the general public in Dublin suffered due to the internecine fighting between Irish nationalists. Virtually every night in late 1922, the nights were rent by gunfire as the anti-Treatyites sniped at Free State posts. Almost every day in this period saw gun and grenade attacks on the streets of the Irish capital as often as not killing and injuring passers by as well as combatants. Also absent are the British, whose 6,000 troops still in the Irish capital until December 1922 would have been very visible during the novel’s timeframe.

Now of course, a historical novel is not history, nor does Irregulars aspire to be, but a novel can give a flavour of the past. The mood here is of depression and disillusion, which seems about right. The poorest in Dublin really did live in dire poverty in this era and the city really did have a flourishing prostitution trade, including, presumably in young boys, as portrayed in some of the novel’s darkest chapters.

That said, I felt the portrayal of combatants on both sides as gratuitously cruel, bordering on psychopaths, did border on the stereotype. Some no doubt deserve the depiction. But Charlie Dillon lacks the complexity of the real Charlie Dalton, who was himself a deeply traumatised young man by the time he ended up in National Army Intelligence in 1922. The portrayal of the republican leader in particular, O’Hanley, based very loosely on real IRA commander Ernie O’Malley (both operated in concealed rooms in salubrious Dublin streets in the civil war), as a religious zealot and closet sexual predator seemed again to owe too much to allegations of paedophilia against Patrick Pearse.

But perhaps all this is pedantic. No one is likely to mistake Irregulars for a factual account of the period. More important is how Irregulars works as a detective novel. And here I am happy to report that it succeeds handsomely. The story is gripping, the twists unexpected and at times frightening. The emotions of loss, fear and frustration all feel visceral and real. The depiction of early 20th century Dublin, its sights, smells and speech are by and large well drawn and feel authentic.

By the end the reader really cares about what has happened to the missing boy, Nicholas Dolan. Sean O’Keefe the protagonist ends up almost as lost as when he started; his journey through Dublin’s underworld and the fringes of the civil war, accompanied by the ferocious Dublin hard man Albert, yielding results, but not the ones he expected.

For those looking for a good read and also glimpse of what it might have been like to live in Dublin during the dark days of late 1922, Irregulars is warmly recommended.

You can listen to Kevin speaking about his novels and the Irish revolutionary period here.

One Response to "Book Review: Irregulars"