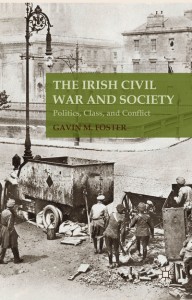 Irish history is often inward looking, almost navel gazing, obsessed with the same arguments and the same issues, to be debated time after time. It is as well therefore at times to get an outside viewpoint. One such is provided here by Gavin Foster, an American historian of the Irish Civil War working at Concordia University in Montreal, Canada.

This book is a very original look at the conflict that immediately followed the Anglo-Irish Treaty, one which split open the hitherto united nationalist movement and which shaped the politics of independent (southern) Ireland for much of the twentieth century.

In eight chapters, each really a stand-alone essay, Foster reconsiders the society that shaped and was shaped by the intra-nationalist conflict. This means not so much the military aspect of the war, or the time worn questions of whether it was a war of pro-Treaty democrats against anti-Treaty militarists or of republicans against pro-Treaty ‘imperialists’. Rather it looks at  questions of whether it was a war caused by class or status-conflict within Irish society.

What Foster argues is that, first of all, one must set aside classical ideas of Marxist class conflict, where politics and history is driven by the clashing of rival economic interests, manifested in clearly defined rival classes. Rather, he argues, Ireland was a society of multiple social divisions, only some of which can be defined as purely economic. For instance, the older, mostly Protestant, upper middle class (often dubbed pejoratively ‘imperialist’ by republicans) tended to look down on the arriviste Catholic professionals, who in turn tried to ape their manners.

Republicans in the years after the Civil War, Foster reports, took great glee in hearing how the Free State nationalist establishment was scorned by the older upper classes, not knowing their conventions of dress and speech. Republicans for their part eschewed dinner suits top hats and the like in conscious rejection of such affectations and represented themselves as the champion of the ‘common people’. Despite this the top echelons of both pro and anti-Treaty factions tended to come from a similar lower middle class Catholic background.

Foster examines class and status through indirect means such as by examining the social meaning of clothes and language.

Foster reports that pro-Treatyites tended to refer to their opponents (in terms similar to how the British had referred to them all before the truce of 1921) as ‘corner boys’ ‘riff raff’ and other such labels. Their supporters were merely out for loot and material gain.

Alternatively, when they were not painting them as ‘looters’ and criminals, pro-Treaty accounts tended to speak of the ‘Irregulars’ as irresponsible young people, often ‘trucileers’ who had not fought the British, while the real national fighters supported the government.

Republicans on the other hand raged against the middle class, the Catholic Church, the press, and big business which had united  with former unionists and Free State traitors to bury the Republic of 1919. Todd Andrews in his memoir described the Civil War as a ‘White Terror’ while Liam Mellows famously wrote that ‘we are back to [Wolfe] Tone and the men of no property’.

Then there was the urban rural divide. Broadly speaking Dublin and its hinterland was pro-Treaty and the more remote, mountainous and poor a rural region was, the more likely it would be anti-Treaty. While this is of course a generalisation, there were for instance, plenty of republican guerrillas in Dublin and conversely, Donegal, the most remote and poorest county in the Free State, was majority pro-Treaty in sympathy. Nevertheless the urban-rural divide  did colour combatants perceptions of each other.

Foster conveys to us the sense of Dublin National Army troops being sent to places like Kerry or Connemara that their enemies were ‘culchies’, ‘padjoes’, or ‘bog trotters’ – all derogatory Dublin nicknames for supposedly uncivilised country people who lived on mountain or bog. Conversely in counties like Kerry the republican fighters saw the war to a large degree as defending their county from an invasion by a hostile Dublin government.

What of actual class conflict, the clashing of rival economic interests? Foster argues that rural class conflict was an important aspect of the Civil War, those without land often seized it during the conflict, sometimes under the protection of the anti-Treaty IRA. On the other side government Ministers such as Kevin O’Higgins and Patrick Hogan worried that society itself was breaking down as a result.

To combat social disorder they formed the Special Infantry Corps, basically a gendarmerie charged with putting down disorder that was not part of the IRA campaign but too militant for the nascent Civic Guard police to deal with.

So concerned were Free State Ministers at social ‘anarchy that they set up a new Army Corps to deal with it.

Their largest deployment was in helping to break a farm labourers’ strike in County Waterford, where they ended up in gun battles with the local IRA who were acting on behalf of the strikers.  Foster has useful figures for their deployment, numbers of arrests and so on. For the record Foster records that the 4,000 strong Special Infantry Corps arrested 371 people in the first nine months of 1923, seized over 1,500 animals and  60 gallons of poitin (illegal liquor). Not a chilling level of repression but nevertheless significant.

The Republicans never had a clear policy on either agrarian or class conflict but did stand over and defend the confiscation of farms from those they had judged to be spies or informers. They did however, discuss at various times adopting more radical policies of land confiscation or nationalization.

In short class and status was not irrelevant to the Civil War, but nor was it a straightforward cause or driver of events. Nevertheless, the perception that the Free State embraced the monied establishment and the republicans the lower classes was reinforced after the conflict when thousands of republicans, jobless after release from internment had to leave the country in search of work

Ireland was far from the only country to experience internal conflict in inter-war Europe. Many of these civil wars ended in bitter and bloody repression of the vanquished. In Finland the ‘Whites’ oversaw the deaths in captivity of some 13,000 ‘Red’ prisoners, in 1918-9, while in Spain, after Franco’s victory over the Republicans in 1939  at least 50,000 and perhaps as many as 200,000 of his opponents may have died either through execution or overwork in prison camps.

By comparison as Foster notes, the vengefulness of the pro-Treatyites in Ireland was rather muted. Nevertheless Republicans felt it keenly for all that and Foster argues here that the continuing imprisonment of anti-Treatyites after the IRA’s dump arms order of May 1923 contributed greatly to the bitterness the war engendered in subsequent years.

Republican nursed bitterness for many years at post civil war repression but it was mild compared with elsewhere in interwar Europe.

Many thousands were arrested in sweeps in the summer of 1923 and up to 12,000 were still held up to December 1923 (prompting a mass hunger strike) with the last prisoners not being released until the summer of 1924.

There were in addition, by Foster’s count, at least 18 killings of prisoners or unarmed republicans after the Civil War (alongside 80 official executions and about 150 ‘summary killings’ of anti-Treaty prisoners during the actual civil war). Rather vindictively also, the Free State granted an amnesty to any illegal acts carried out by its own forces in August 1923 but did not enact a similar amnesty for its opponents until November 1924. Anti-Treaty political activists complained all the way up to Fianna Fail’s accession to power in 1932 of police harassment.

However, Foster also argues that whereas republicans argued that they were systematically sacked from their jobs, and boycotted when they tried to get new ones after the Civil War, this is not borne out by a close look at the evidence. Many republicans, for instance, retained or recovered their position in the Civil Service throughout the period.

In short republican grievances about a vengeful Free State are not without some substance but should not be overstated either. There were also killings on the other side after the war, including the shooting of a Garda during a concerted series of raids on police stations in 1926 and of course the assassination of leading pro-Treaty politician Kevin O’Higgins in 1927.

This is an interesting, original and thought provoking book. But I do have some criticisms of Foster’s theses. ‘The Irish Civil War and Society’ almost totally avoids talking about the military aspects of the conflict and therefore misses out on some important points.

For instance, Foster on a number of occasions voices the rather strange opinion that the expansion of the National Army to over 55,000 men was a measure aimed at curbing social discontent by temporarily alleviating unemployment. Admittedly the slump in the world economy after 1921 hit Ireland hard and it probably did the Free State no harm to find temporary work for thousands of unemployed First World War veterans. But in fact the Free State cabinet were acutely aware that Army was creating major financial burden for the new state and tolerated it only because they thought it was a military necessity.

Was the bloated National Army really a way of alleviating unemployment?

The reason for this was that although by late 1922 the anti-Treaty IRA had been largely broken as an offensive force, by this date the National Army’s control still did not extend far beyond barracks in large towns. It was unable to enforce things such as unimpeded transport, tax collection or law enforcement.

While this remained the case the basic functions of the state were inoperable and the only thing the pro-Treaty authorities could think of to do about it was to recruit thousands more men in early 1923. They distributed them in small garrisons throughout the countryside to secure it from anti-Treatyite raids and enable the Free State’s civilian administration to get up and running. By contrast, almost the entire IRA strategy by this time – destroying railway lines, blocking roads, burning income tax offices and Civic Guard barracks, intimidating tax collectors, and so on – was aimed at preventing the operating of civil government. This struggle and not any social concern, was what prompted the intensive recruitment to the National Army throughout the Civil War.

One other comment; a close look at the IRA files in the Twomey papers reveals that the IRA adopted agrarian agitation to a degree which may not have been appreciated yet, in this book or elsewhere. Correspondence from Liam Lynch to the Dublin Brigade in early 1923 for example orders raids on the houses of those who sold cattle seized from agrarian agitators. In the border counties Cavan and Leitrim the National Army reported that the IRA’s main support came from landless men to whom it gave land after evicting unionists or Free State supporters.

These caveats aside however, I can warmly recommend this book to all those interested in making sense of the bitter little war between former comrades in Ireland between 1922 and 1923.