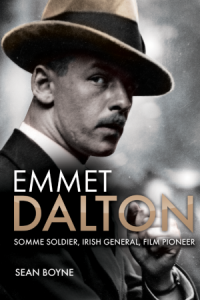 Emmet Dalton’s career is so unlikely it seems amazing that no one has written a book on his life before. Like a character in the films Dalton was later to produce, he seems to have popped up as a player in all the main events of early 20th century Ireland.

Born in Falls River Massachusetts  to Irish parents in 1898, he grew up in Dublin at a time of war and national revolution. Like his close neighbour in Glasnevin, Ernie O’Malley, he attended O’Connell’s Schools and just like O’Malley and his brothers was caught up in this age of militarism. First he joined the Irish Volunteers, the nationalist militia set up to force the passage of Home Rule in 1913.

Then, following the urging of Irish Parliamentary Party leader John Redmond, and much to his nationalist father’s disapproval, he joined the British Army in the First World War, where he served on the Somme and in the Middle East. For the first but not the last time he witnessed the violent death of one of his personal heroes – nationalist politician Tom Kettle who died serving in the British Army at the battle of the Somme.

Returning to Ireland in 1919 he found a land in turmoil – the politics of Home Rule having been overtaken by armed republicanism. His brother Charlie had already taken up the gun – he was by 1920 a member of Michael Collins IRA Intelligence Department – and it only took a a few raids by heavy handed Black and Tans for Emmet to offer his services to the IRA against his former comrades in British uniforms.

Dalton’s most famous exploit was participation in an attempt to spring Longford IRA leader Sean MacEoin from Mounjoy prison using a hijacked armoured car. More importantly though, Emmet Dalton’s undoubted bravery and ability soon drew him into Collins inner circle. After the truce of July 1921 that ended fighting between the IRA and Crown forces, the 23 year old Dalton was given the job of liason officer with British Commander in Chief Neville Macready. This was a thankless task in many ways as breaches of the truce were many and often.

So close did Dalton become to Collins that he accompanied ‘the Big Fellow’ to London for the Treaty negotiations as his personal bodyguard. And when, in late June 1922, Civil War broke out between those Irish nationalists who supported the Treaty and those who rejected it, Dalton became one of the National (pro-Treaty) Army’s most senior commanders. Dalton commanded the troops who besieged and took the anti-Treatyite’s stronghold at the Four Courts in Dublin and then led the seaborne assault on Cork that smashed the republicans’ ‘Munster Republic’.

Dalton’s relationship with Collins – a relationship he did not hesitate to call ‘love’ – came to tragic end at Beal na mBlath, when their convoy was ambushed by the anti-Treaty IRA and Collins, shot through the head, died in Dalton’s arms.

Dalton hung on for a while as National Army Commander in Cork until December 1922, when he unexpectedly quit the Army and took up a job as clerk of the Senate. Thereafter he was by turns an entrepreneur, encyclopedia salesman, private detective, film distributor and finally maker of films, which he produced in Ireland at Ardmore Studios. He was also involved in some way as an intermediary for an American OSS agent in an attempt to get Ireland to hand over the Treaty Ports (naval bases occupied by the British from 1922-1938) to the US during the Second World War.

A number of the films Dalton had made in fact referenced the independence struggle and his own hero, Michael Collins. He died in 1978.

All the above the reader will learn from Sean Boyne’s exceptionally well researched and extremely readable biography.

To leave the review there, however would be to sell the book short. Boyne’s research, particularly on Dalton’s role in the Civil War, has uncovered a number of extremely interesting facts that will be new and surprising to historians of the period.

This extremely well researched biography throws up a number of new facts -particularly about the Civil War.

Starting with Dalton’s shift from British officer to IRA guerrilla, Boyne’s book shows us that the key moment was when Auxiliaries raided his family home and arrested and imprisoned Emmet himself and his blameless father. This is interesting as it shows how, far from the idea that all ex-servicemen were hostile to republicans and vice versa, loyalties could often be fluid in revolutionary Ireland.

Dalton always maintained that he did not regret either his service in British uniform or in the IRA  and indeed in the Civil War, we learn here, he defended recruiting ex British servicemen into the National Army where, he argued they were ‘the most disciplined and effective troops’.

After Dalton occupied Cork city on behalf of the Irish Free State in August 1922, it seems he was responsible for the first officially sanctioned execution of the war – having a National Army private named John Winsely shot in Cork Prison in September 1922 ‘for treachery’ – handing over ammunition to the ‘Irregulars’ (anti-Treaty IRA). This is significant for a number of reasons.

For one thing, this execution took place before the Public Safety Bill (September 27), which authorised executions. Nevertheless to the knowledge of this reviewer, Winsely is not commemorated in any republican roll of honour, nor has reference been made to him in the existing literature.

It seems Emmet Dalton carried out, on his own authority, the first official National Army execution of the Civil War.

It appears Dalton also asked National Army Commander in Chief Richard Mulcahy for permission to shoot without trial anyone caught carrying arms without permission. Since this was exactly what the Public Safety resolution later allowed for, it could be that Emmet Dalton was one of the drivers of the Free State policy of executions that marked the latter stages of the Civil War.

Another interesting nugget for students of the Civil War is that, also in September 1922, men attached to Dalton’s command who had previously been gunmen in Collins’ Squad, carried out a number of reprisal killings of anti-Treaty guerrillas in the Cork area. Dalton at first seemed to support their actions but later wrote to Mulcahy saying that he wanted the Squad men sent back to Dublin, complaining not of their ruthlessness but of their indiscipline.

Both Charlie and Emmet Dalton suffered from alcoholism after the war years.

They were duly shipped home, including their unofficial leader Liam Tobin, who went on to become National Army Director of Intelligence (until December 1922). Many of these ex Squad and Intelligence Department men rapidly became associated with what Dublin republicans referred to as ‘the murder gang‘ and following the civil war in the Army Mutiny of March 1924, became attempted mutineers and putschists.

Emmet’s brother Charlie (closely associated with the ‘Tobin crowd’) was only 17 when in 1920 he was asked to shoot down British agents in their beds on Bloody Sunday. Two years later he was accused of the killing of three teenage anti-Treatyites who he arrested in the Civil War. Whatever the truth (some maintain that although Dalton had the Fianna boys arrested he was not the one to have them killed) it is clear that Charlie Dalton never got over the horrors of the years of the gun. Boyne’s book confirms what many accounts have hinted at, that Charlie suffered not only from alcoholism and depression but also from a severe psychological breakdown later in life.

What was certainly new to this reviewer, however was that Emmet Dalton also came out of his wars a damaged man. By 1925 he was out of a job in the Senate, drinking heavily around Dublin and on occasion waving around a revolver in Dublin pubs – all clear symptoms of what then known as ‘shell shock’ and today as Post Traumatic Stress Disorder. In was not until the birth of his third child in the mid 1930s that he managed to settle down.

So to sum up this is not only a very accessible read – which one might expect given Boyne’s long experience as a journalist – but also a book from which historians and other interested readers can learn a lot.

Though its value judgments on early 20th century politics can sometimes be questioned, this book ins highly recommended.

No book is perfect of course and there are some areas in which the book is not as strong as others. Occasionally value judgement from the later 20th century kick in.

The reader for example is told of the Ulster crisis in 1913-14 (in which armed unionists blocked Home Rule) that ‘many nationalists were not yet ready to accept the idea that the Ulster Protestants might be regarded as a separate people entitled to self-determination’ – an argument which not only implies that nationalists should really have accepted such a thing, but also fails to take into account that Carson’s Volunteer initially wanted to block self-government for all of Ireland. Nineteen Thirteen was not 1998.

Similarly on the outbreak of the Civil War, Boyne appears to accept without question the narrative of pro-Treatyites upholding the ‘Will of the People’ against the undemocratic militarists who opposed the Treaty. This was certainly what the pro-Treatyites argued, not without some justification, but it was not a view shared by their opponents who never proposed an anti-democratic alternative to the Treaty.

Without wishing to re-hash this argument again (it is discussed here  and here on the Irish Story), the reality was good deal more nuanced in 1922 and adopting the partisan rhetoric of either side of the Civil War does not help us come to terms with the episode today.

If a thorough review obliges one to make some criticisms, this should not put off anyone interested in the Irish revolution, the First World War and early independent Ireland from picking up a copy of this excellent book.