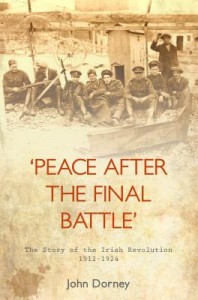 This is the introduction to John Dorney’s new book, published by New Island Books. It is a general history and overview of the Irish Revolution. You can buy a copy here from the publishers for €19.99 (free post anywhere in Ireland).

The germ of this book started some time back in the mid 2000s when I noticed a date on a memorial. The memorial was on Orwell Road in south Dublin to one Frank Lawlor and the date was December 29, 1922. As I was growing up, my father had often referred to this memorial and how the man it commemorated had died there fighting the British for Irish independence. When I was a child he used to call the spot ‘ambush corner’ and to speculate that the IRA had chosen the site as it was on a tight bend, where a truck carrying British soldiers or Auxiliaries would have had to slow down.

The date, which I noticed purely by chance, immediately changed the story. December 1922 was well into the Irish Civil War, when Irish nationalists turned their guns on each other over whether to accept the Anglo-Irish Treaty. Looked at even more closely the Irish language memorial gave up some more secrets. It read, ‘Francis O Labhlar’, An Cead Ranga Comhlucht,An trear Cath, Briogaid Atha Cliath, d’Airm na Phoblachta, a dunmaruscaid ar an laithir seo.” (Frank Lawlor, 1st Company, 3rd Dublin Brigade of the Army of the Republic, was murdered on this spot).

Not only was Frank Lawlor not killed fighting the British, he was not killed in combat at all, but ‘murdered’ by fellow Irishmen in the pay of the new Irish Free State. As it happens, Lawlor was picked up at his home in Ranelagh by undercover pro-Treaty soldiers or police and, apparently in revenge for the recent assassination of pro-Treaty politician Seamus Dwyer, shot by the roadside, just outside the city boundaries. If my family had got the story of Frank Lawlor so wrong, I pondered, what did this mean for the story of the Irish struggle for independence as a whole?

This book is an effort to ensure that the ordinary participants in the revolutionary period and what happened to them can be understood.

This book is essentially an effort to ensure that the Frank Lawlors and what happened to them can be understood. The struggle for independence is so central to modern Irish identity that for a long time it was not carefully studied at all. When it was it tended to fall into one of two traps. One was to glorify it, splitting the story up into various segments – the Easter Rising, the War of Independence and then, as quickly as possible, or perhaps not at all, the Civil War. In 1966 for instance Roibéárd Ó Faracháin, in charge of marking the 1916 rising on Irish state television stated that, ‘While still seeking historical truth, the emphasis will be on homage, on salutation’.

The second trap was to use the upheaval of 1912-1924 as a way of arguing about contemporary issues – particularly the use of violence in the conflict in Northern Ireland that ground dismally on throughout the 1970s, 80s and early 1990s.

To some extent in academic history, but especially in the media and in popular histories, the problem with these debates  was that they were not primarily interested in the historical event at all, except as a way of either justifying political violence or condemning it, raging against the revolution betrayed in 1922 or giving thanks for the saving of Irish democracy, showing the illegitimacy of British rule or showing how a peaceful liberal settlement of Irish grievances was foiled by irrational ultra nationalists. None of which helped at all to explain how Frank Lawlor ended up dying on Orwell Road, shortly after the Christmas of 1922.

Too often the history of the Irish revolution becomes bogged down in polemics which obscure as much as enlighten us about the past.

A great deal of the story of Ireland’s nationalist revolution remains basically untold. However, in recent years groundbreaking new research has opened up such topics as what guerrilla warfare really meant on the ground, how Northern Ireland got off the ground and how the Irish Civil War was actually fought.  This book is not primarily a work of original primary research (though it does incorporate elements thereof) but a synthesis of the research of historians, Irish and otherwise in recent decades.

It has benefitted hugely from the opening of archives such as the Bureau of military history in recent years, which gives us an unprecedented ground level view of events in those years. It hopes to take the reader though all of the events that led to partition of Ireland the substantial independence of two-thirds of the island in 1922. It is not principally a book about high politics but about how the revolution was experienced by people on the ground

At the same time, such a book cannot avoid engaging with some of the main arguments that have raged and to some extent continue to rage about the Irish revolution. The first of these was whether it was revolution at all. This book hopes to show that the struggle for Irish independence was indeed a popular mass movement, far beyond simply young men with guns; incorporating those who marched against conscription, those who participated in general strikes, those who occupied land they believed belonged to ‘the people’ (or even themselves), those who campaigned for Sinn Fein and against them those who held torchlit parades for returning prisoners. It will argue that social and economic factors, often dismissed as irrelevant the nationalist struggle were, unavoidably, at the heart of events as they progressed. In particular the land question and its settlement punctuated the progress of the revolution at every step.

While this book is not a work of historical argument, it does try to engage with the key debates about the Irish revolution; how democratic was British rule? What was the relationship of militant republicans to the popular will? How important were sectarian divisions?

The British administration in Ireland before the First World War was not democratic as we would understand the term, nor was the limited autonomy known as Home Rule the same thing as Irish independence. Armed revolt was not inevitable, in large part it was a result of the frustrations caused by the First World War among Irish separatists, but nor was a militant challenge to the old order unforeseeable. While legitimate debates will continue as to whether violence was necessary to gain a significant measure of Irish independence, the argument that the upheaval of 1916-23 changed nothing is, this book will argue, false.

Another vexed question is to what extent the Irish revolution was a sectarian one, pitting Catholic against Protestant. This is question that contemporaries never adequately answered and here I have tried to show the complexities involved. Irish republicanism itself was a specifically non-sectarian ideology, insisting that there was no difference between Irish Catholics and Irish Protestants. And yet Irish history and society meant that inevitably that most separatists were Catholics and that, not all, but a significant number of Irish Protestants were ardent unionists. At the same time, the creation of Northern Ireland, saw openly sectarian violence between the Protestant majority, now with their own autonomous government and the Catholic minority.

Finally, this book hopes to show that the Irish Civil War of 1922-23, often dealt with either on its own or as a tragic afterthought to the revolution, was in fact central to its conclusion and to its results. The disillusion and disappointment felt in the early years of Irish independence cannot be explained without a serious look at the intra-nationalist conflict, how it came about and how it was actually fought. It might have been that the partition of Ireland, which was mooted first in 1912, would have been confirmed in 1922 in any case.

The independent Irish state might have emerged from the revolution conservative, hardened and suspicious of its own people. It might have been most concerned in its early years with avoiding bankruptcy rather than trying to tackle its social ills without the Civil War. But that it did emerge in this way was due in large part to the conflict of 1922-23.

The title comes from a quote from the IRB newspaper Irish Freedom in 1910; ‘The Irish attitude to England is War Yesterday, War Today, War Tomorrow, Peace After the Final battle’

It is hoped also that this book will show that the contemporary rhetoric of democratic pro-Treatyites against militaristic anti-Treatyites is a poor guide to explaining the chaos and muddle on both sides that characterised the outbreak of fighting over the Treaty.

Finally, this book tries to show how the participants, particularly the nationalist or republican revolutionaries in organisations such as the Irish Republican Brotherhood saw themselves and what they were engaged in. The title of this book ‘Peace After the Final Battle’, is taken from an article in the IRB newspaper Irish Freedom in 1910. From this perspective the events of 1912 to 1924 represented a struggle of good against evil, ‘the final battle’ to right the wrongs of Irish history, to reverse the process of colonisation and to forge a new Irish nation. Whether they succeeded and whether the effort was worth the cost, this book will leave readers to judge for themselves.

Below is an interview with John Dorney on Peace after the Final Battle on Near FM’s History Show.

5 Responses to "‘Peace After the Final Battle’, The Story of the Irish Revolution, by John Dorney"