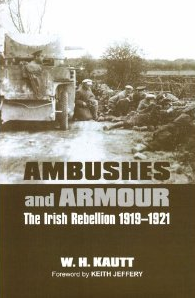 Ambushes and Armour: The Irish Rebellion 1919-1921 by W.H. Kautt, 9780716530251, Irish Academic Press, 2010.
Reviewer: William Butler
~
History they say does not repeat itself, as it is extremely unlikely that the individual elements, personalities, places and actions that all had to come together to create one great historical event can ever be duplicated. However historians researching the past sometimes discover events that throw up parallels to present times.

As a military officer W.H. Kautt saw that the current strife in Afghanistan and Iraq was mirrored in the actions of the Anglo-Irish War. The similarities are easy to spot, the use of IED’s, ambushes and other related counter mobility operations by the insurgents. A conventional army and police force’s attempts to counter these with up armoured lorries and armoured vehicles and their attempts to develop a suitable tactical response to a fluid battlefield where the enemy does not wear a uniform and the population for the most part are hostile to those armed forces.

In his book Ambushes and Armour W.H. Kautt determines to analyse specifically the I.R.A. tactics in regards to ambushes and the British army and R.I.C.’s counter methodology and having mentioned the parallel between Ireland then and Afghanistan and Iraq now in his introduction he then allows the action to do the talking and the reader to see the similarities for themselves. Kautt uses individual ambushes to illustrate the evolution of the tactics involved from the I.R.A.’s first rather amateurish attacks and the British authorities’ rather amateurish responses to the republican’s ever more professional and elaborate ambushes and the British army and R.I.C.’s response by developing a counter insurgency doctrine.

Kautt makes some extremely interesting points in relation to the war and its execution. He discusses how the legal restraints on soldiers determined the British army’s actions and indeed inactions. How the Republican movement never really found a balance between the moderates and the radicals within the movement and it is this imbalance that in many ways led to the civil war.

Kautt emphasises simply how important mobility is in insurgency warfare and that the I.R.A.’s trenching and mining of roads, destruction of bridges, along with the transport strikes and the British army and R.I.C.’s lack of transport limited the authority’s response and in many cases allowed the republicans to gain the initiative. One of his most interesting segments is when he discusses the controversy over the possible use of dum dum bullets by the I.R.A. He has two problems with this suggestion the first is that the majority of the ammunition used by the I.R.A. during the rebellion was captured from the British which would in turn mean that they were also using such illegal rounds, the second is that if the I.R.A. had to manufacture bullets of their own using spent cartridges which it seems that they were forced to through military necessity, these homemade rounds would not have the performance of factory made munitions.

Kautt has the discipline to stick to his topic and not to veer off into quasi-moralistic judgements. He examines each individual action with clear eyes and crisp prose and cuts through the fog of war delivering thorough, thoughtful analysis. Kautt’s accounts of the ambushes are first-rate extremely detailed yet at the same time lively and easy to read. His finest moment is his dissection of the Kilmichael ambush and his after action report on the controversy over it is sensible, fair and balanced. His common sense approach to the debate, his examination of every point of view and his background weighs heavily in his favour. As an American military man he is not burdened by an insider’s prejudices, his military background adds
authority to his suggested scenario as he dispassionately scrutinises of the events that day.

As an American military man he is not burdened by an insider’s prejudices, his military background adds authority to his suggested scenario as he dispassionately scrutinises of the events that day.

Kautt makes good use of maps, illustrations, firsthand accounts and both British army and I.R.A. after action reports to illustrate the learning curve of those involved in the war and the consequences of underestimating the enemy and lack of preparation. His appendices are quiet interesting. Kautt’s writing is clear though at times a little overly academic and he tends to rely too much on military jargon which is not always explained. A glossary of terms should have been added. The books greatest flaw is its lack of photographs which would add immediacy to the text.

This is an extremely interesting study of a major and often under-appreciated aspect of the Anglo-Irish war. Ambushes and Armour is a book that should be read multiple times to really get the most out of it.

About the reviewer:
William Butler is a historian employed by the Heritage Service in Kinsale. He has an honours degree in
Heritage Studies.

One Response to "Book Review: Ambushes and Armour The Irish Rebellion 1919-1921"