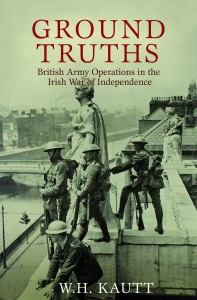 ‘Ground Truths’ is a re-printing of the British Army’s report on their operations in Ireland from 1919 to 1921, in the conflict that they called ‘the Irish Rebellion’, but we now call the Irish War of Independence. Divisional reports on operations in the south, north and west and Dublin have been previously re-printed by Mercier Press and historian William Sheehan but this is the first time that the overall Army report, which was drafted in 1922-23 but never published, has seen the light of day.

This volume is introduced by American military historian W.H. Kautt, who has previously published ‘Ambushes and Armour’ (2010), which is a military analysis of guerrilla and counter-guerrilla operations in Ireland from 1919-21, in the context of American counter-insurgency doctrine that was being developed in both Iraq and Afghanistan. Here Kautt contributes an interesting pre-amble on how the report came to be written and subsequently buried, and also notes throughout the text, commenting on the report, giving extra context and pointing out factual inaccuracies and half truths. There are, it turns out, quite a few of these.

A definitive military history of the Irish War of Independence is hard to write. The nature of the conflict meant that it was composed of thousands of small ,sometimes individual, actions, rather than large scale military encounters.

The British Army’s report of the ‘Irish Rebellion’ argued that it had been about to put down ‘rebel outrage’ but was stabbed in the back by British politicians.

It was impossible to measure military success or failure in conventional terms such as territory taken and held and even what US forces in Vietnam would later call ‘the body count’, which was difficult to determine and often misleading anyway. The only way to put a shape on events was the collating of the number of incidents recorded per month per locality. And even this could not tell the researcher the most important detail who was winning (more terms from the Vietnam War) the ‘battle for hearts and minds’ or the competition for political legitimacy among the population at large.

For all of these reasons, the British Army’s report has a frustrated, self-justifying character. There was no war, they claimed, merely a security operation against a cowardly ‘murder gang’. And, despite their failure to put down ‘the Irish rebellion’, the Army maintained that it did not lose the conflict. Rather, it was on the verge of putting down ‘the rebels’ when stabbed in the back by politicians who declared a truce with the ‘Sinn Feiners’.

The British Army had a very complicated task in 1920s Ireland, one which it never fully understood.

The British Army’s role in Ireland, as Kautt points out in his notes was far from straightforward. They were not given a simple brief to put down the IRA guerrillas militarily. Rather, at least until early 1921, they were supposedly deployed as aid to the civil power – in practice the Royal Irish Constabulary and its new paramilitary adjuncts the Black and Tans and Auxiliaries. Even where, as in the southern province of Munster, martial law was declared in late 1920, the Army’s role was to crush only the IRA but not Irish nationalism as a whole.

Rather it was supposed to clear away the Republican ‘extremists’, who were terrorising the  supposedly ‘moderate’ majority and to implement rather than Irish independence, the limited self government offered by Home Rule. Too little repression would not defeat the separatists, too much would alienate the population at large. This was a hellishly complicated task for soldiers to accomplish and Kautt argues that they never really understood it – hence their constant refrain that the IRA were not real soldiers, that the situation was not a real war and that they would have won it with ease had the politicians not lost their nerve.

The polemical and opinionated tone of the report make it of highly questionable value as a historical source, except as a guide to opinions within the officer corps of the British Army at the time. At the start of each chapter there are a collection of ‘outrages’ selected from the statistics and incidents reports collected by the Army at the time. However there is no attempt to present them either as a statistical or qualitative analysis. Rather incidents seem to be selected to highlight the Army’s contempt for the IRA’s cruelty and cowardice but also their military ineffectiveness.

The polemical and opinionated tone of the report make it of highly questionable value as a historical source, except as a guide to opinions within the officer corps of the British Army

Take for instance, the account of an attack on KIlmallock RIC barracks in May 1920, in which two policemen were killed. The report claims that ten RIC men were attacked by over 1,800 IRA. ‘Odds of 200 to 1’. (Numbers far ‘beyond credulity’ as Kautt notes correctly, probably by a factor of ten). This the report concludes was typical of the IRA who ‘were perpetually on the lookout for favourable opportunities with little attendant risk’ but ‘cases were undoubtedly very numerous where the excellence of tactical precautions taken by commanders frustrated any attempts.’

Their analysis of political events likewise reflects military prejudices more than serious analysis. For instance their analysis of the rise of the republicans claims that both Sinn Fein and the Volunteers were controlled by the Irish Republican Brotherhood or IRB. While the IRB was certainly influential behind the scenes, it certainly did not control either organisation and actually faded in importance as the independence struggle went on. Similarly the military report claims that ‘Bolsheviks’ were a significant force in the national revolution, an idea dear to British Army hearts at the time but one which had little basis in fact.

The very real support that the republican movement had is simply written out of the equation. Moreover the excesses of British forces are either ignored or blithely explained away.

Writing of Bloody Sunday in November 1920, for example, when, after the IRA assassinated 14 British officers,  elements of the RIC and Auxiliaries shot dead 14 people at a GAA match at Croke Park, the report writes, ‘shots were fired at the police as they drew up and the police returned the fire. A stampede ensued … as a result about 10 civilians were killed and about 65 wounded or injured, chiefly as a result of the stampede’. Which as Kautt points out in his notes, ‘would appear to be a rather weak attempt to justify what occurred’.

In fact no firearms were found, no shots were fired at the RIC, who fired 282 rounds in two minutes, and only two of the fourteen dead civilians died of anything other than gunshot wounds.

And while lists of casualties are included towards the end of the book they do not appear to be reliable. The Army report lists 43 officers and 113 other ranks of its own soldiers killed in action from mid 1920 to mid 1921, along with some 340 wounded. It also listed 405 RIC personnel killed with 682 wounded. However, a more recent study, the ‘Dead of the Irish Revolution’ (Published by Eunan O’Halpin in Terror in Ireland, 2012) lists 514 RIC and 262 British military deaths. Clearly both lists cannot be right.

Many oral sources on the Irish revolution such as the Bureau of Military History statements by IRA veterans have recently come into the public domain. These should always be treated as a partisan source and their accuracy checked against other primary sources. I would suggest that while an interesting insight into British military attitudes to the war in Ireland, and useful for things like troop numbers and dispositions, the British military report, published in ‘Ground Truths’ should be treated in the same way.

This is no reflection at all on W.H. Kautt, however, whose notes are informative and insightful and who has done the history reading public a service by publishing this document.