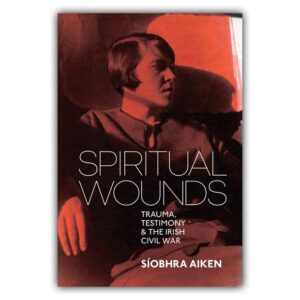 The Irish Civil War (1922-23) which formed the final phase of the Irish revolutionary period, it is commonly said, provoked enduring silence among those involved in the decades afterwards. Eoin Neeson, who wrote a history of the conflict in 1966 called it, ‘the unspeakable war’.

However, in this innovative and interesting book Siobhra Aiken, the great granddaughter, as it happens, of one of the key participants in the Civil War, IRA Chief of Staff Frank Aiken, sets out to prove otherwise.

Formal histories of the Civil War were thin on the ground, at least until very recently, and many of the archival sources were closed until recent decades. Some of the archival sources were in fact destroyed by participants, afterwards, notably the records of the state’s executions by the outgoing Cumman na nGaedheal government in 1932 and, we learn here in the epilogue, by Frank Aiken himself, who burned many of his own papers that related to the Civil War.

Siobhra Aiken gets around the supposed ‘silence’ that surrounded the Irish Civil War by exploring the writings of veterans and participants in memoirs, novels and other formats.

However, Siobhra Aiken maintains, the idea of a ‘silence’ on the internecine conflict over the Treaty is ‘socially constructed’ and a result of the neglect of certain genres of evidence, notably memoirs, and fictionalised memoirs and novels written by participants, especially in the 1920s and thirties. These publications, which Aiken points out were sometimes bestsellers in their day in Ireland, comprise a mine of alternative personal testimony of the Civil War.

In fact, she maintains, such literary works written in both Irish and English (in both of which languages Aiken works) allowed otherwise ‘silent’ veterans – notably many women who had served in Cumman nmBan – to tell of their own experiences in the Civil War. A very extensive trawl through this literature forms the backbone of the research on which this book is based.

If one considers the numbers involved in the Civil War – as many as 60,000 men passed through the Free State’s National Army and organisations like the detective division the CID and perhaps as many as 20,000 through anti-Treaty organisations; the IRA, the Fianna and Cumman na mBan – the numbers who committed their experiences to memoirs and fiction was miniscule. Indeed, one poignant feature one will notice while trawling through the Military Pension applications of the relatives, particularly of dead pro-Treaty soldiers, is that many were illiterate.

However, notwithstanding this, Aiken shows that, considering the taboo that supposedly existed on broaching the Civil War, popular literature on the topic from the post-Civil War decades is surprisingly extensive. Memoirists and novelists may be an unrepresentative sample of Civil War veterans as a whole, but there were still far more of them than most would have thought.

Why were they driven to record, or perhaps re-imagine, their experiences? Aiken argues that for many it was a way of dealing with the psychological trauma of the revolutionary years in general and the Civil War in particular. She notes that many participants in the conflicts in Ireland in those years did suffer from what was then described as, ‘attacks of nerves’, ‘shell-shock’ or ‘neurasthenia’, or especially in women, ‘hysteria’.

Symptoms included sleeplessness, hyper-vigilance, depression, alcoholism and bursts of aggression, and ‘feeling removed from yourself’ all entirely consistent with what is today classified under the term of Post-Traumatic Stress Disorder or PTSD. One writer and former Cumman na mBan member Margaret Buckley (who wrote under the pen name Garreth O’Driscoll) is quoted here as saying that many IRA men of her acquaintance were ‘able-bodied’ but not quite able minded’ in the years after the Civil War.

Writing, Aiken suggests, was part of a ‘talking cure’ for many; part of the Freudian idea that trauma results from dangerous or frightening experiences outside of the normal understanding of those affected and can be corrected or healed by forming a narrative in which events are finally understood and pieced together in a narrative that is at least explicable.

Dorothy MacArdle, for instance, most familiar as the polemical republican historian of the Civil War, also wrote a collection of short stories on it, we learn, in which she puts into the mouth of one of her characters, a Cumman na mBan activist who has seen IRA men executed by Free State soldiers in green uniforms that the sight was ‘so absurd that it couldn’t come true’.

Those familiar with the Irish Civil War will not be unsurprised to see the names of Charlie Dalton and Ernie O’Malley crop up in this context, both of whom (though they took different sides in the Treaty split) were severely traumatised by what they had seen and done in the revolutionary period. They both also wrote popular memoirs, albeit in Dalton’s case only covering up to the truce of 1921 – thus not detailing his actions as Free State officer in the Civil War

However Aiken also introduces us to many less familiar figures such as Frank Carty a one time IRA commander in Wexford, who wrote a novel based on his Civil War experiences to ‘work it off my system’. Desmond Ryan similarly wrote that he needed to wrote to ‘exorcise the grimmest memories’ by writing about them and to ‘recover good temper’.

These writers included many women, among them Mary Manning, Margaret Buckley and Annie Smithson, who, Aiken argues, found it easier to relate their experiences, often relegated after the revolutionary years to a footnote of male experience, in fiction rather than in conventional memoirs or autobiographies.

Some of the novels examined here, best-sellers in their day in Ireland, delve into the grisly horrors of the conduct of the Civil War on the ground.

Among the most interesting veteran-novelists we encounter are the married couple Eilis Dolan and Patrick O’Horan. Both were republican veterans of the Civil War (he in the Citizen Army and she in Cumman mBan) who were so disillusioned with the Irish Free State after their release from internment that they converted to Methodism, moved to Belfast as evangelists for their new religion and eventually became political unionists. Their novels highlighted the tragedy and futility of revolutionary violence in Ireland.

Some such as former pro-Treaty IRA and National Army veteran Parick Mulloy in his semi-autobiographical novel ‘Jackets Green’ wrote explicitly of the horrors of Civil War. Of prisoners brutalised by ‘sadistic’ officers, stripped naked and beaten with revolvers and of the horrific aftermath of a mine attack on a National Army truck that left intestines hanging from telephone wire and blood streaming into sewers.

Mulloy’s book was poorly received by critics at the time including by fellow Civil War veteran Sean O Faoilean, as obscenely graphic and violent but as Aiken notes it nevertheless sold well, indicating that ‘popular narratives outside the canon [of celebrated republican testimony] offer a far cruder sense of revolutionary violence and indeed had a large and eager readership.’

Mulloy’s account, which also hints at homosexuality among prisoners at Ballykinlar internment camp before the Truce and tells of Free State soldiers indulging in heavy drinking and visits to brothels was deemed ‘obscene’ and ‘vulgar’, but many of the elements described here do chime with documentary sources for the Civil War.

A report by Dublin Corporation in late 1922 showed that anti-Treaty prisoners in Dublin, notably at Wellington Barracks and Oriel House were indeed stripped and beaten by National Army Intelligence officers. Mines did indeed inflict horrific and sometimes devastating casualties on pro-Treaty troops and often as a result unleashed the worst reprisals of the Civil War. J.J. O’Connell the head of Army Inspections was scathing, in the Army Inquiry of 1924 of the discipline, hygiene and conduct of many National Army troops.

Another interesting nugget presented here, with a strong ring of truth, is that by Mary Manning who described swimming as a child at Seapoint in the south Dublin suburbs as fighting raged in Dublin city centre in July 1922 at the start of the Civil War. Her nannies, she records, ignored the distant sounds of gunfire and the flames visible on O’Connell Street, instead gossiping and shouting at their charges not to swim too far out into the sea. Many civilians studiously ignored the violence of the Civil War and in so far they were able, ‘tuned it out’ from their everyday experience.

So exploration of novels and fictionalised memoirs by participants can indeed, as Siobhra Aiken shows, contextualise and add flavour to documentary sources, though this reviewer would still be wary of the idea that they were equally as important a sources as traditional primary and archival sources.

Some parts of the book do ‘over-reach’ I felt. The chapter on sexual violence in fact produces few substantive examples, even in fiction, of sexual violence during the Civil War. Republican prisoner Eithne Coyle for instance, wrote in her memoirs of being happy for the ‘protection’ of female attendant when imprisoned by leery Free State troops in Donegal. There is also discussion of sexual relations between revolutionaries, issues of sexual consent, and the role of prostitution. But there is not evidence enough presented to warrant the conclusion that there was ‘an unacknowledged civil war of sexually controlling violence by Irish men against Irish women’.

Instead the chapter wanders mostly into the preceding Irish War of Independence and allegations of rape against Crown forces, especially the Black and Tans and hair cutting by republicans against women who associated with the Police or military. While it might be objected that these are part of the story of the Irish revolutionary period as whole, either a book discusses the Civil War period as a distinct episode or it does not.

Similarly the chapter on ‘perpetrator testimony’ i.e. of those who had killed and wrote about it, is mainly taken up with examples from the War of Independence from Dan Breen,  Mossie Harnett, George Lennon, Frank O’Connor and Ernie O’Malley. There is however an interesting discussion of former Free State soldiers Patrick Hogan and Anthony O’Connor whose novels discuss the dehumanising of the ‘enemy’ during wartime. Hogan has his characters briefed that ‘we must act as if we were engaged against the blackest strangers’ while O’Connor’s character (based on his own experiences) comes to treat the enemy as ‘dark objects on the end of his rifle; and convinces himself that ‘they couldn’t be Irish’.

Overall, this is a very interesting book, leading us to new ways to think about the psychological imprint of the Irish Civil War upon whose who participated in it as well the cultural literary and popular memory of the conflict

This is not a book about the politics of the Civil War. There is a discussion of Peadar O’Donnell’s memoir The Gates Flew Open as example of republican absorption of the Civil War into an optimistic narrative of suffering on the road to eventual victory but the shaping of the Civil War as polemic by writers such as P.S. Hegarty, Dorothy MacArdle and Ernie O’Malley and others is not really delved into.

Nor are the political meanings they and others placed on the war over the Treaty – the vindication of Irish democracy over ‘gunmen’ or the crushing of the Irish Republic by British proxies – discussed. But this may be a good thing, there are and will be other books for that. This is a book rather about personal experience -the ‘spiritual wounds’ of the title – and the personal impact the Civil War had on participants and how they attempted to work this out through retelling.

Overall, this is a very interesting book, leading us to new ways to think about the psychological imprint of the Irish Civil War upon whose who participated in it as well the cultural literary and popular memory of the conflict.

If you like the Irish Story and wish to support our work, please considering contributing at our Patreon page here.