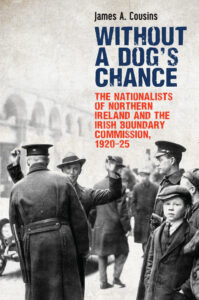 As the centenary of the Anglo-Irish Treaty approaches, attention will once more be brought to bear on one of its many contentious clauses; Article 12, the one that dealt with the partition of Ireland.

This stated that Northern Ireland could opt out of joining the Irish Free State, but that the boundary between the two would be determined by a commission, to redraw the border, ‘in accordance with the wishes it the inhabitants, so far as may be compatible with economic and geographic conditions’.

This is a history of partition as experience by the northern Irish nationalist minority.

This left northern nationalists, a minority in Northern Ireland, but a majority in the west of the six-county area, divided. Those living in the western part, or along the border, strongly anticipated their territory being reallocated to the Free under the Boundary Commission. They were thus more likely to cleave to the pro-Treaty Sinn Fein position and look forward to living under a Dublin government. Anti-Treaty republicans who wanted to scrap the whole settlement were very much in a minority in the north.

However, those in the east of the Northern Ireland, particularly in its main city, Belfast would be left ‘without a dog’s chance’ of escaping from majority unionist rule. The quote, from which the book draws its title, is in fact from Free State minister Kevin O’Higgins, pondering the problem of the northern minority. Belfast nationalists, electorally speaking at any rate, generally stuck with Joe Devlin’s Home rule nationalism, favouring Irish unity, if necessary, sacrificing separation from Britain to avoid living under unionist domination.

As it was of course, neither border nationalists, nor those from Belfast, nor the Dublin government got any territory from the Boundary Commission. Its report, recommending no significant changes to the border apart from very minor adjustments (including granting some majority Protestant territory in County Donegal to Northern Ireland) was leaked in late 1925 and thereafter the Dublin Government agreed with London to bury the report, and forego any territorial changes in return for the dropping of the Free State’s debts liable under the term of the 1921 Treaty.

Northern nationalists, to quote the final chapter of the book, felt they had been ‘bargained and sold’, and with some justification.

James Cousins is not a typical writer of Irish history. He is a Canadian who works for the Ontario regional government as senior policy advisor on Indigenous Affairs. As such he brings an outsider’s eye to an age-old problem and also a fresh theoretical perspective.

He posits that Catholics and nationalists in In Northern Ireland can be seen as a ‘trapped minority’, following the work of Israeli scholar, Dan Rabinovitz, who has described the Palestinian minority inside Israel in this way. The ‘trapped minority’ belong to a ‘mother nation’ but are ‘trapped’ inside another state and are thus ‘marginal twice over: once within the alien state and once within the largely absent mother nation’.

They are also, posits Rabinovitz, ‘chronically divided’ politically and as result and have difficulty forming a ‘united front’.

This clearly does apply to northern Irish nationalists to some degree, particularly in the period in question.

They were clearly alienated, indeed unwanted, by the new government of Northern Ireland, which subjected them to sustained repression and political discrimination in the years 1920-25. At the same time, the new Dublin government effectively abandoned the project of a united Ireland well before 1925. Nor did it, distracted by Civil War in its own jurisdiction, do much to raise, or even listen to, the grievances of northern nationalists.

Furthermore, northern nationalists were indeed divided, violently so at times, between republican Sinn Feiners, Devlinite and Hibernian nationalists and later over the Treaty split also.

Using this framework of the ‘trapped minority’, Cousins attempts to tell the story of partition and of the Boundary Commission, primarily through the prism of northern nationalist newspapers such as the Devlinite Irish News, the Derry Journal and others. At the same time there is also extensive archival research, particularly of the Irish government archives.

One possible criticism of this approach is that the Unionist point of view is mostly absent. Another is that the book at times attempts to do too much, straying away from its core subject sometimes into a general history of Irish War of Independence and Civil War. These chapters could perhaps have been pruned back.

If the informed reader will find little new in those sections, however, there is much new, or at any rate little known, to ponder in other parts that deal directly with partition and the boundary commission.

One of these is the extent of disunity and confusion of policy among northern nationalists. Joe Devlin, their de facto representative, assented to partition, or at least excluding ‘Ulster’ from Home Rule in 1916, at the urging of Lloyd George and his party leader John Redmond, in order get a Dublin parliament up and running.

This proved to be a fatal mistake, as no such parliament came to pass, and yet Devlin had accepted in principle the possibility of partition. This was to cost his party dearly particularly in west and south Ulster, as well as encouraging unionists to ‘hold fast’ to their own position.

The enthusiasm expressed across the board in the northern nationalist press for the Anglo-Irish Treaty, under which they expected to come eventually under an all-Ireland authority, might similarly be viewed in hindsight to have been somewhat misplaced.

It is also interesting to learn that during the ill-defined ‘border war’ of early 1922, in which both pro and anti-treaty IRA units, covertly sponsored by Provisional Government head Michael Collins, skirmished across the new border with the Ulster Special Constabulary, the northern nationalist press was bitterly critical of republican violence.

Not knowing apparently of Collins’ role, the border campaign was condemned as being futile and provoking a murderous backlash against Catholics in Belfast. The Irish News for instance, condemned the IRA raids as ‘hideous pranks’ that threatened the ‘very existence of 450,000 [Catholic] men women and children in the Six Counties’.

Perhaps even more interesting is the evolution of the Free State government’s thinking with regard to partition.

As many accounts of partition have chronicled, after the death of Michael Collins in the Civil War in August 1922, the Dublin government dropped his initiatives such as funding and arming the Northern IRA, and paying northern school teachers and County Councils who refused to recognise the Northern government.

Nevertheless, Cousins’ research shows that in 1922-23 even as they had to deal with civil war in their own jurisdiction, they were still hoping either to end partition to at least to take sizable chunks out of Northern Ireland by legal means. Minister for Home affair Kevin O’Higgins apparently thought that the Northern state could not survive losing ‘even ten square miles’ of territory and still be financially viable.

Kevin O’Shiel, the Free State government’s legal advisor, himself originally from County Tyrone, wrote in February 1923 that the correct policy was ‘to force [Northern Ireland prime minister] Craig to come to suitable terms with us [i.e. to come under the Dublin government’s authority] or in the last resource to push to the ultimate our advantage at the Boundary Commission… Our case would appear to be unanswerable.’

Cousins’ research showed that the Free State government hoped for an end to partition via the Boundary commission but failed to insist in a plebiscite or referendum in border regions.

And indeed, we learn that that the Dublin government had been briefed by an international law expert, Bolton Waller, who specialised in League of Nations dispute resolution, that redrawing the border to transfer south counties Fermanagh and Tyrone, and towns such as Derry and Newry, fit the definition of self-determination as outlined under the Treaty of Versailles, given that they had been controlled by nationalists since the 1920 local elections.

For this reason, perhaps, the Free State did not insist on a plebiscite, to guide the Boundary Commission, as had taken place in the borderlands between Germany and Poland, or Germany and Denmark in the wake of the First World War.

This proved to be the most serious in a series of blunders by the Dublin government. For the Boundary Commission, with two British and one Irish representatives, declined to seriously consult local nationalists in border areas as to their wishes, deeming their job to be rather to ‘fix a boundary’ than to redraw the border and focussing more on Article 12’s stipulation to consider ‘economic and geographic conditions’ rather than, as it also stated, ‘the wishes of the inhabitants’ concerned.

When in 1924, dismayed Free State representatives asked why a plebiscite was not held as had been in Upper Silesia (divided between Poland and Germany in 1921), they were breezily told by Justice Richard Feetham that there was no such stipulation in the Anglo-Irish Treaty.

One question one is left with by the end is about the role of the Free State’s representative on the Commission, Eoin MacNeill, himself an Ulsterman by birth. Why he did not insist, at the very least, on a formal mechanism for consulting the inhabitants of majority nationalist west Ulster seems extremely puzzling.

The Dublin government’s handling of the boundary issue was inept, but was re-partition a viable stable solution?

Another thing to bear in mind of course is that had, as the Free State wanted, most of western Northern Ireland been transferred to the Free State, this would have either seen a Protestant exodus or the creation of another ‘trapped minority’ of unionists in southern territory. Nationalists in Belfast, meanwhile would have found themselves an even more vulnerable minority in a rump Northern Ireland. Hence a re-partition, even if done more equitably, may not have produced a better lasting solution.

This is an interesting book and contains much that is new and of interest. Cousins is keen to portray the mindset of his ‘trapped minority’ by showing their deep identification with Irish nationalist political culture through the poems and songs produced by the contemporary press. References there abound to Irish history and mythology from the 1798 rebellion to the Flight of the Earls to ancient mythology. This serves to illustrate their deep sense of betrayal at being ‘bartered and sold’ and ultimately separated from people they considered their compatriots.

If I have a criticism of this approach it is that some perspectives get left out, including, of course the unionist one but also the anti-Treaty republicans (northern or southern), whose voice does not often appear here.

This is, however, merely a question of emphasis and readers seeking to learn more about both the mechanics of partition as well as how it was perceived by northern nationalists will find much of interest in this book.

4 Responses to "Book Review: Without a Dog’s Chance, The nationalists of Northern Ireland and the Boundary Commission 1920-25"