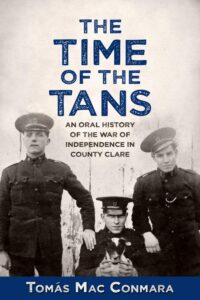 Memory… is the diary that we all carry about with us.

The recent Decade of Commemorations has produced a considerable number of books on the ‘Tan War’ AKA Irish War of Independence or Anglo-Irish War. Some bad, some boldly lazy, and, thankfully, many wonderful treatises of this formative period in Ireland’s recent past.

Few though, match the uniqueness of Tomás Mac Conmara’s The Time of the Tans: an oral history of the War of Independence in County Clare.

The Time of the Tans is an oral history, based on two decades’ worth of research and over 400 interviews in County Clare.

A labour of love and dedication, Mac Conmara’s work is based on two decades’ worth of research. During which, he conducted over 400 interviews, recording the echoes of the Irish Revolution in his native Co. Clare. This impressive collection of testimony is bolstered by privileged access to private family collections, and official contemporary records.

A remarkable feature of this work is the relationships between past and present, memory and personal identity; almost all of which are underpinned by a strong sense of place. In many ways, this book is a collection of memories. Memories of a formative time and place within the recent history of Ireland.

Many of the interviewees recall in great detail exactly where they were, what they were doing, and at what time they heard a gunshot in the dark, the hum of an engine in the distance, or the sound of strange footsteps marching on the road outside.

Long forgotten colloquial place and familial names are recalled, further adding a personal depth and connection to the past, and indeed to the land. As Mac Conmara writes: ‘These sites of memory are all the more powerful due to their relationship to the local oral tradition and their historical relevance to the local community’. It is clear, from the reminisces contained within this book, the impact which these events impressed upon the local communities in the county.

The inclusion of intonation, phrases, and colloquialisms adds a richness to the text. Carrying on the Irish folk tradition of the seanchaí, Mac Conmara beautifully captures the styles of speech and gestures that were peculiar to his native Clare. Numerous colloquial shibboleths are explained within the text so as conveying the context and meaning of their use to unfamiliar readers.

The book is organised thematically into seven chapters – plus an appendix. Each dealing with different facets of the experience of revolution in the county. The first chapter, ‘Criminals of England: Stories of Memory’ is a testament to the longevity of the trope of rife criminality among the backgrounds of the Black and Tan and Auxiliary recruits to the Royal Irish Constabulary (RIC) who were deployed in Ireland to take the war to the IRA.

Hyperbolic assertions of British criminals and jailbirds set loose to wreak havoc in Ireland are present, alongside more tempered, nuanced commentary from the author. It is worth noting that such hyperbole is not, however, the preserve of folk memory, and is often found repeated in the testimony of former veterans of the conflict; many of whom were more than content to propagate this myth.

Ahistoricity aside, what is striking is the sheer terror invoked by the mention of these corps among the interviewees of this text. Moreover, while the supposed background of the Tans and Auxies was in many ways a figment of their imagination, the dread, anxiety, and distress of those who experienced their behaviour and suffered at their hands was indeed very real. Even decades after the events, the raw power of emotion and intensity of memory is striking.

The recollections of the interviewees may not be strictly accurate, but they rather convey the experience and perceptions of those who lived through the ‘troubled times’ of the 1920s’

Chapter two ‘Run for it: Stories of Experience’ details the near misses and lucky escapees of Clare Volunteers during the revolutionary period. Again, the lingering scars of past experience are evocatively recalled, most notably in the account of Patrick McMahon of Coolmeen, who recounted to the author that in the years following his arrest and beating by the Black and Tans he still suffered great emotional and physical pain: ‘I still suffer, all owing to the beating which I received from the military at Miltown Malbay Barracks’.

Chapter three ‘All their own sons: Stories of Community’ pays homage to the auxiliary – no pun intended- role of the lesser known participants of the revolution. Those who kept and sheltered the columns and active service units of the Clare brigades. The mothers, sisters, and wives of active volunteers, and indeed the women of Cumann na mBan.

As one of the most violent areas in Ireland during the revolutionary period, Clare is certainly a worthy county of study. Recently published research by Daithí Ó Corráin and Eunan O’Halpin reveals that Clare was the seventh most lethal county in Ireland with at least 101 fatalities occurring due to political violence between the years 1917-1921. Once adjusted per 10,000 of the population, Clare is third in the macabre ranking system.

Chapter three ‘All their own sons: Stories of community’ is perhaps the strongest of the thematic episodes presented in this volume. Again, the effect these killings had on the local population is keenly felt from the recollections included here, such as the ‘Scariff Martyrs’, four young men whose deaths at the hands of British Crown forces in November of 1920, or Willie Shanahan and Michael Mc Namara, who were brutally tortured and killed by the military later that year. ‘There was a great reverence, like, if they could have canonised them they’d have done it’ one local recalled.

Chapter four ‘Born wild: Stories of the extraordinary’ provides a collage of anecdotes from the revolutionary period, some sombre, others humorous. Most peculiar, however, are the folkloric ghost stories of Black and Tan spirits who haunted the local populace years after the events of the Irish Revolution.

Chapter five ‘A corner of the grave: Stories of silence’ begins with the tale of Private George Duff Chalmers, a nineteen-year-old member of the Royal Scots regiment who was executed and secretly buried by members of the Mid-Clare Brigade IRA.

Chalmers case was a high-profile one and the discovery and subsequent exhumation of his remains and reinternment in Grangegorman Military Cemetery was the subject of national press and television coverage in May 2018. What the frenzy of media attention failed to mention was the vital role played by local memory and the oral tradition in the discovery of Chalmers’ final resting place.

The two final chapters deal with the aftermath and trauma of the events of the revolution. The poignant aural recollection of a tormented former volunteer whose internalised pain resulted in him screaming out at night is something which rarely features in accounts of the revolution.

Historians, frequently, treat memory as an unreliable source for history and as the author points out, they are often on solid ground in that criticism. Memory is subjective, axes are ground, details forgotten or changed over time, and egos massaged.

Critics of this book as source of history may very well question the veracity of events recalled so long after they took place. Or indeed the memories of someone recalling an event which occurred when that person was a little more than five years of age, or a story passed down through generations. A point made by the author, and one certainly worth bearing in mind when considering not only the use of memory, but the county of Clare as a lens through which to explore is that:

‘… Clare remained a distinctly rural county [in the aftermath of the revolution]. Consequently, the majority of villages and parishes maintained a similar composition to the county of the 1920s. As a result, memory and oral tradition associated with the revolutionary period were more easily preserved’.

Thus, there existed a living communal memory of the events of the past waiting to be tapped. Mac Conmara’s use of memory as a tool for understanding the past bridges the gap between those who remember and those who wish to interpret.

This book should appeal to scholars of the period, folklorists, and the general reader alike.

Layers of memory and experience intertwine and weave to form both a personal and communal connection within the realm of lived experiences. While some historians may be weary of the use of memory as an historical source, The Time of the Tans’ refreshing focus on the experience of revolution at a local level among non-participants is a novel one, and for this it should be lauded. This book should appeal to scholars of the period, folklorists, and the general reader alike.

2 Responses to "Book Review: The Time of the Tans: an oral history of the War of Independence in County Clare"