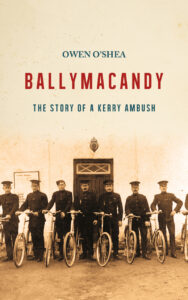 The current decade of centenaries has sometimes managed to create an environment which contexualises and considers the events being commemorated, as opposed to straightforward condemnation or celebration. The nuanced, balanced commemoration of the Soloheadbeag ambush in 2019, which included relatives of the RIC men killed being case in point.

But the government’s subsequent disastrous attempt to commemorate the RIC invoked an unprecedent anger but also resulted in an upsurge in the popularity of the traditional heroes vs villains narrative.

This narrative however often ignores the most basic task of history; to try to understand how people felt in the past and why they acted the way they did, rather than impose our own present centred perspectives.

This is something which both the more traditional and writers deemed ‘revisionist’ are often guilty of. And this is the central strength of Owen O’Shea new book on the Ballymacandy ambush of June 1921 – a desire to understand the past rather than show which side you are on.

The popular view of Irish history as the inevitable journey towards independence makes the fact that before 1922 so many people worked for the British state somewhat jarring.  Indeed, that so many men from Irish nationalist backgrounds served in the Royal Irish Constabulary or British Army is difficult to comprehend or seen as awkward.

And this is where Owen O’Shea’s volume on the Ballymacandy ambush of 1921 so effectively succeeds.  O’Shea is a native of Milltown, just outside the ambush site, in County Kerry and is someone who has published extensively on Kerry’s history. In his conclusion he movingly talks of his intimate knowledge of the ambush site as it is so close to his own home and this creating a desire in him to understand the people who were caught up in the fighting, what motivated them, and what life was like for people in his own part of the Kingdom 100 years ago.

Local history is often criticised as being narrow and lacking broader context; O’Shea adeptly shows this not to be the case

From that position of local knowledge, but also the desire to be impartial and even handed, the reader is presented with a multi-faceted and deeply moving account of the various people who found themselves caught up in a bloody ambush. O’Shea has an excellent grasp and mastery of the available primary source material which is used to recreate the ambush and events leading up to it.

Local history or case studies are often criticised as being narrow and lacking broader context; O’Shea adeptly shows this not to be the case. By looking at one specific engagement the reader encounters the various forces and factors that so defined that conflict; the motivations of IRA men, the dilemma faced by Irish born members of the RIC, the presence and inspiration of older traditions of Fenianism and agrarianism, an older decaying landed gentry looking on in confusion and the civilians caught in the middle who were so often the victims of vicious violent British reprisals.

The book also works by considering the subsequent ramifications of such ambushes. It considers the difficulty veterans faced when seeking financial recognition. The book also looks at the sense of purpose and identity such ambushes created among veterans that endured for decades and often found expression in loyalty to Fianna Fáil. But that such feelings equally created a crisis of identity and loyalty with the emergence of the Provisional IRA and Troubles in Northern Ireland in the late 1960s.

Story of an ambush

The book examines other interesting elements such as successful guerrilla engagements being so reliant on chance, initiative and the presence of a successful series of contingencies.

The local Milltown IRA became aware of an RIC patrol leaving Killorglin for Tralee on June 1st 1921 and decided to set an ambush for the patrol’s return journey that very day. The local IRA men were bolstered by more experienced and battle-hardened IRA fighters from Dingle and Tralee who, almost by chance, happening to be in the immediate vicinity and who were willing to take part.

Perhaps, most importantly the RIC on their return journey stopped off in Castlemaine for a few drinks and where they were made aware that an IRA ambush on the road to Milltown ahead and considered the advisability of taking another route back to Killorglin. (Any difficulties regarding the geography of the area is removed by the addition of a useful map).

This book examines an ambush by the  IRA of an RIC patrol in June 1921, but also looks at the origins, motivations and fates of the participants

The RIC decided to press on with the original route through Milltown regardless. If they had taken precautions and adopted an alternative route back to Killorlgin, the ambush would not have occurred. One cannot help but conclude that the drink taken inspired this foolhardy approach. But also, if for instance, the more experienced fighters did not happen to be in the area the ambush may well not have been executed so professionally

County Kerry’s experience of the 1919 -21 conflict was bloody and bitter, and most of the violence was initially carried out by Black and Tans and Auxiliaries. These acts of violence were often unprovoked and almost always more lethal and indiscriminate than the IRA actions in which it was in response to.  The IRA in Kerry before the arrival of the Black and Tans largely acted as a rural police force but the violence of the Black and Tans largely spurred the IRA in Kerry into becoming more effective military force willing to engage in lethal violence.

The ambush at Ballymacandy was one of the Kerry’s IRA’s more successful operations with a total of four RIC casualties, out of a fourteen-man patrol, and certainly the most substantial action in the mid Kerry region. It was also part of a growing militancy and aggression evident in the Kerry of IRA in the spring of 1921. By June of 1921 the IRA in Kerry were engaging in more large scale ambushes locations such as Rathmore in east Kerry, Lispole on the Dingle Peninsula and perhaps most notably at Headford which was quite easily the largest single engagement of the 1919-21 conflict.

The one small criticism of the book would be a desire for a more detailed account of retreat of the surviving RIC men. O’Shea mentions the survivors found their way to the train tracks to the west of the ambush site and followed the track back to Killorglin but it is not made clear if they engaged in a fighting retreat from the ambush site or if they escaped during a lull in the fighting.

However, this volume is a local and personal history rather than a strictly military one, and the absence of details on some more technical aspects of the engagement and its aftermath are understandable in this context.

Sensitive but not sentimental

Both popular and academic history publications on this period are often let down by sentimental language and too overt an identification with the rebels who are characterised uncritically as heroic.

O’Shea is clearly moved by the bravery of the men involved and the trials and tribulations faced by the guerrilla fighters but this is never at the expense of recognising other crucial factors to the conflict. O’Shea consistently points out the role female republican activists played in the struggle, but also that the IRA engaged in brutal forms of intimidation such as the forced cutting of women’s hair and that there were people in the locality intimidated by the IRA and crown forces in equal measure.

The book also gives equal attention to the Crown forces involved in the ambush, which included long time Irish members of the RIC. O’Shea describes the subsequent tragic experiences of  the Irish families of the dead RIC men. O’Shea recounts the unusual and awkward position these people found themselves in independent Ireland and the level of discomfort they faced in sensitive and moving prose.

O’Shea’s prose is never lost in maudlin sentimentality but rather clearly driven by a desire to tell the story of the ambush and its aftermath from every side.

But again, O’Shea’s prose is never lost in maudlin sentimentality but rather clearly driven by a desire to tell the story of the ambush and its aftermath from every side.

Many are understandably possessive of this period, and believe it should be told in a way that essentially celebrates the conflict. O’Shea rather shows that history, and especially local history, can belong to everyone and a history which considers every side and is immeasurably richer than one which does not.

The book will no doubt be of interest to those interested in local, and specifically Kerry history, and the 1916 – 23 period generally.

5 Responses to "Book Review: Ballymacandy, The Story of Kerry Ambush"