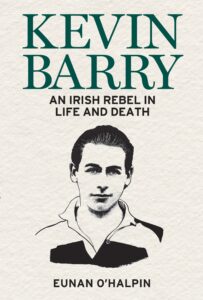 Kevin Barry, aged 18, was hanged in Mountjoy Prison in Dublin on November 1, 1920, nearly exactly 100 years ago at the time of this review. He was executed for his part in an IRA arms raid on a party of British Army troops on Church street that left three soldiers dead.

Forever young due to his early death and immortalised both in a sentimental ballad and in a photo of him, looking youthful, in his hurling jersey, Kevin Barry became a symbol of cruel British oppression and martyred Irish idealism. ‘A lad of eighteen summers’, goes the song… ‘another martyr for old Ireland, another murder for the Crown’.

In this biography, Eunan O’Halpin, as it happens, a grand nephew of Kevin Barry, though also a distinguished historian at Trinity College Dublin, attempts to put flesh on the bones of Kevin Barry beyond his premature death at the hangman’s noose in 1920.

This is a biography of Kevin Barry, a youthful IRA member hanged for murder in 1920.

This is, as O’Halpin comments in the text, somewhat difficult for a young man whose life was so short and whose existence was basically subsumed into song and symbol. Nevertheless, the early chapters of this book are a rather interesting window into middle class life in early twentieth century Ireland.

Kevin Barry went to the elite fee paying Catholic school Belvedere College and subsequently studied medicine at University College Dublin. He is therefore often assumed to have come from a privileged upper middle class background. By early twentieth century standards this may have been true, when about a quarter of Dublin city’s population lived in one room tenements, with no sanitation or running water. But by modern standards, the Barrys were just scraping at the edges of bourgeois life.

The family had a dairy farm in County Carlow and Kevin’s father and mother’s part of the family enterprise was to sell the milk in Dublin that was sent up by train. They and their eight children lived in a rented building on Dublin’s Fleet Street that was condemned by the Corporation as unsafe for human habitation. The young Kevin divided his time between inner city Dublin and Tombeagh Co. Carlow as a boy, in accordance with the wishes of his father, who died in 1908, who wanted his children to have a rural upbringing.

Barry, who attended an elite school, is often assumed to have come from a privileged upper middle class background but by modern standards, the Barrys were just scraping at the edges of bourgeois life.

It was perhaps, as O’Halpin writes, their desire for respectability that made the family transfer Kevin from the Christian Brothers’ education at O’Connells Schools, where incidentally, a great many future rebels, including Ernie O’Malley and Charlie Dalton attended, to Belvedere.

He seems to have had a penchant for rebelliousness – he wrote school essays, for instance, praising socialism and the great Dublin strike of 1913, damning monarchy and praising republics and of course fervently hoping that Ireland would soon be free. But as this book reminds us, this was homework, he had to write something. His essays might have been the bones of a serious emerging political intellect, but perhaps he wished merely to provoke his more conservative teachers.

Aside from his rebellious streak, he seems to have been a typical young man, who enjoyed the rough and tumble of team sports, both the Rugby favoured by his upper class school –  the mark of identity, then as now for Dublin’s fee-paying schools, and hurling, as befitted an Irish nationalist of the era.

Todd Andrews’ acerbic but highly readable autobiography, Dublin Made Me is full of scorn for the ‘Diocesan boys’ like Barry, whom he considered ‘Castle Catholics’ unlike ‘Christian Brothers Boys’ such as himself, who formed the backbone, in his conception, of the ‘real people’ of Ireland.

Both Andrews, Ernie O’Malley, Andy Cooney, Bobby Bonfield and others, as well as Kevin Barry, were all students at UCD when they began their IRA careers and whereas for instance Andrews suggests this was not common among students, third level students do seem, as this book suggests, to have been over-represented in the IRA for their small share of the population at the time.

Kevin, quite unlike his Dublin IRA contemporaries Andrews or O’Malley, mixed easily with girls and young women and formed both friendships and romantic attachments from an early age, even if his language about girls would draw the censure of social media today. He is quoted here, for instance as describing one young woman he met on a tram as ‘a peach of a tart’.

However, while the young Barry, full of vim and youthful vigour, was at an age when everything seemed like a game, he soon became involved in the deadly serious business of the IRA’s emerging campaign against British rule.

He was not, as some were, drawn into the struggle after being victimised by Crown forces, or because he was especially disadvantaged by the British control over Ireland. Rather, and here he was probably typical of the young men and women, especially in Dublin, who formed the rank and file of republican organisations, he was swept up in the deluge of popular enthusiasm for the separatist cause after the great mobilisations of 1918 – the anti-conscription campaign and the 1918 election.

Barry was, quite unusually we learn, a member of two different IRA companies, one in Carlow and one in Dublin. In the hill country around the Carlow-Wicklow border, O’Halpin tells us, he was involved in arms raids on the local gentry including a Redmondite and a Protestant cleric, the latter of whom actually exchanged shots with Kevin. He was also involved in a successful raid on British troops in Dublin, launched by his own 1 Battalion, that, without firing shots, successfully disarmed the soldiers in question.

This was  the template for the raid on the party of soldiers who were picking up bread at Monks’ bakery on the corner of Church Street and North King’s Street on September 20, 1920. The intention was not to kill the soldiers but simply to take their arms. Later on in the War of Independence, the IRA Dublin Brigade would mount ruthless and deadly attacks on the British military in Dublin, but at that time no soldier had been killed by Republican forces in the city since the Rising of 1916.

As it was, however, shots were fired on September 20, some of them by Kevin, whose automatic pistol jammed repeatedly and three soldiers were killed or mortally wounded. Barry was hanged for murder, but it would probably have been impossible to prove, had there been a legal defence, that he alone killed any of the three. He was found under a cart, trying to clear his jammed weapon – it was loaded with two different types of bullet we learn, causing the malfunction.

He was held for about eight weeks, during which time he underwent a trial for murder by military court martial – civilian trials having been suspended under the Restoration of Order in Ireland Act. Most unwisely, he chose not  to accept legal counsel and not to recognise the court or even to defend himself. It is somewhat tragic to read that the officers at his court martial, some of them sympathetic to the young man, encouraged him to ask questions of witnesses but Kevin Barry, apparently treating the whole proceedings as as joke, declined to do so.

A competent barrister could surely have raised enough doubts as to whether Barry’s shots had actually hit any of the soldiers to have had the sentence of death commuted at least to imprisonment, in which case, Barry would have been released in 1922 after the Anglo Irish Treaty.

His last letters also seem cheerful to the point of frivolity. He remarked in one letter that he could not give a speech from the dock as he would have burst out laughing. But such is youth. Life may seem less precious to those who have seen so little of it.

It is probably significant that from then onwards, IRA members on trial for their lives in Dublin were represented by Michael Noyk, a lawyer in the pay of the republican movement and every effort was made to beat the charges.

A further nine more Volunteers were hanged in Dublin in 1921, however and six more judicially executed by firing squad in Cork. Hundreds more died through assassination, in action, or ‘shot while trying to escape’, without the public drama of the legal setting. The IRA themselves, of course killed hundreds of police, soldiers and civilians over the subsequent year, sometimes after courts martial of their own.

Kevin Barry seems to have played the part of the martyr to the end, urging his comrades to continue the fight, remaining calm and ‘manly’ on the scaffold and dutifully saying his Catholic prayers (which, O’Halpin remarks, gave the impression of a much more pious youth than was actually the case).

The Barry family, led by Kevin’s redoubtable sister Kitby, remained staunch republicans and being dead set against the Treaty of 1921, refused ‘Free State’ offers to exhume his body from Mountjoy Prison in 1922 and 1948. Finally in 2001 his remains were reburied in Glasnevin Cemetery.

This is a good, well written book, with many keen insights, that are enhanced by the author’s knowledge of the scholarship surrounding the Irish revolution

The book is wrapped up with lengthy chapters on how Kevin was remembered both by his family and in popular discourse in Ireland and abroad.

This is a good, well written book, with many keen insights, that are enhanced by the author’s knowledge of the scholarship surrounding the Irish revolution and military conflict in general. There are interesting digressions into topics such as why Barry’s gun may have jammed – insufficient ammunition supply and no opportunity for training – as well as the psychology of taking life and of facing death in war.

On the other hand, there were times where I felt that some of the digressions could have been pared back a little. O’Halpin has also been working on the Dead of the Irish Revolution, a compendium of the casualties of the War of Independence, and it shows. There are many references to deaths that are only tangentially connected with that of Kevin Barry.

I would have liked to have heard a little more on the thinking of those directly responsible for Barry’s death, the British military and political leaders and how they planned to use judicial execution in Ireland to put down ‘the Irish Rebellion’. It is notable that compared to their successors in the Free State government of 1922-23, who executed over 80 anti-Treaty fighters in the Civil War, the British were far more halting in their use of execution. Perhaps the popular outcry over Kevin Barry’s death unnerved them somewhat.

Overall this is an interesting and very well contextualised biography of a very short young life, one of many lost during the Irish struggle for independence.