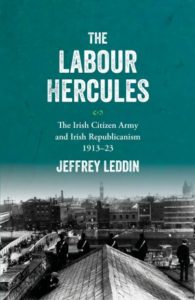 “If you or anybody else expect that I’m going to waste my time talking ‘bosh’ to the crowds,” James Connolly was heard to say, “for the sake of hearing shouts, you’ll be sadly disappointed.” He preferred instead to “give my message to four serious men at any crossroads in Ireland and know that they carry it back to the places they came from.”

Give my message to four serious men at every crossroads in Ireland: James Connolly.

This would prove to be more than just ‘bosh’ on Connolly’s part. A stiffening of the Irish Citizen Army (ICA) was noted in October 1914, upon his assumption of its leadership, with the announcement of a mandatory parade for all members. Rifles were to be “thoroughly cleaned”, anyone absent would be noted and latecomers refused admittance.

Meanwhile, articles by Connolly started to appear in the Workers’ Republic, critiquing the tactics deployed by past uprisings, with the Paris revolution of 1848 and its use of barricades in an urban environment a particular point of interest. “The general principle to be deducted from a study of the example we have been dealing with,” Connolly wrote in July 1915:

Less than a year later, in April 1916, these lessons would be applied in Moore Street and the Royal College of Surgeons as part of the Easter Rising in Dublin.

It had been an event long in gestation. It was also quite a departure from the starting goal of the ICA, when it was formed in response to the police brutality against strikers on the Bloody Sunday of 1913. Three months afterwards, in November, Jim Larkin publicly “spoke of the need for a disciplined force to protect the workers and signified his intention of forming a citizen army,” according to one of his audience.

There were, however, clues that more ambitious plans were afoot for the citizen army in question rather than self-defence. An article in the Irish Times had Connolly proclaim that the new body was “for victory, for the freedom of their country, and his and their grand ideal of a self-centred and a self-governing Ireland [as] a republic among the nations.” Even then, he had the big picture in mind.

In contrast, Jack White, the first Chairman of the ICA, had no such ambitions for any kind of upheaval, whether social or national. Despite his position of command within a paramilitary body, he was ambivalent about the use of force. “In moments I saw the clear revolutionary principle,” White wrote, “at others I was repelled by the bitterness of a philosophy fighting against the whole establishment order.”

The challenge of reconciling these competing strands of thought underpins much of the early chapters of the book. It is also indicative of Leddin’s style, which tends to be heavy on the political and less so on the personal. In any case, the withdrawal of Larkin and White from the scene, the former to America and the latter in favour of a position in the Irish Volunteers, left Connolly as the sole guiding hand of the ICA. Ireland in general was undergoing a radicalisation, with the forming of the Ulster Volunteer Force (UVF) to resist Home Rule, and Connolly looked forward to the time when the ICA could put the recalcitrant Ulstermen in their place.

“When King [Edward] Carson comes along here we will be able to line our own ditches,” he boasted on the day of the ICA’s birth. This is not to say, Leddin writes, “that Connolly was contemplating the events of Easter 1916 but that the possibility of using the Citizen Army as a national weapon had already occurred to him.”

As far as Connolly was concerned, it was not a case of ‘if’ but ‘when’ the ICA would become involved in the wider struggle. Others appreciated the sentiment: Patrick Pearse greeted the transport union men, marked out by their red hand badges, at the Bodenstown Wolfe Tone commemoration in June 1913, telling those present that there were “no strangers here.”

From here, Leddin focuses on the growing rapport between the ICA and the Irish Republican Brotherhood (IRB), the sort of ‘serious men at any crossroads’ who Connolly had in mind, and who shared his impatience for an armed uprising against the status quo. There were bumps on the road, however: the presence of Laurence Kettle as Secretary at the forming of the Irish Volunteers in November 1913 was met with heckles from Labour men who objected to the presence of a known strike-breaker on the Provisional Committee.

The leadership of the Irish Volunteers as it stood was too broad in its demographics to be naturally inclined to revolution. The IRB consisted of only eleven members of the thirty-strong Committee, with the rest, if they were political at all, being from constitutionally or conservatively-minded groups like the Irish Parliamentary Party (IPP) and the Ancient Order of Hibernians. The indifference of the IPP towards the Lockout of 1913 meant that many in Labour regarded the Parliamentary Party as just as another enemy in the class war.

Labour did not play much better with others. “Larkin’s people for some time past have been making war on the Irish Volunteers,” complained Tom Clarke in a letter in May 1914, “they have antagonised the sympathy of all sections of the country and none more so than the advanced section.” He concluded with: “Liberty Hall is now a negligible quality.”

Some thought the ICA lost their distinctive identity due to cooperation with the Volunteers in 1916.

What a change, then, on the Easter Monday of the 24th April 1916, when Connolly and Pearse marched together at the heads of their respective armies from Liberty Hall, along Eden Quay and down Sackville (now O’Connell) Street, to take up headquarters in the General Post Office and thus begin the Rising that the latter had long contemplated – and now had the chance to put his research to the test.

It was the start of six days that would shake an empire but, even at that climaxing moment, there were uncertainties as to where the ICA exactly stood in regard to its comrades-in-arms. “You are going out to fight, not as the Irish Citizen Army, but as soldiers of the Irish Republic,” Connolly told his followers on the eve of battle.

It was a nice idea, one which others agreed with. “The Citizen Army ceased to exist on Monday of Easter Week,” recalled one participant, while for another: “When the joint forces were brought together on Easter Sunday there was no distinction between the Volunteers and the Citizen Army.”

Not all subscribed to this theory of neat and tidy assimilation, however. “While they [the ICA] may have shelved their identity, they never really lost it,” insisted another witness. Even Connolly appeared to have had suspicions, or at least reservations, about the extent of the alliance, as he advised his subordinates – in the same breath that he extolled them to fight alongside the Volunteers – to keep a hand on their guns, lest today’s friends become tomorrow’s foes.

Not that we will ever know what would have resulted in the event of a rebel victory, though Leddin does not consider the likelihood of such a civil war as very likely. But it is also true that the ICA and the Volunteers, for all their ideological overlap, came together – to steal a later quote from Henry Kissinger – like porcupines making love: carefully.

When Connolly went missing on the 19th January 1916, Michael Mallin, Countess Markievicz and William O’Brien, as the de facto troika for the ICA in their leader’s absence, prepared to kick-start their insurrection in Dublin early, with or without anyone else.

Only a request from the IRB, and then Connolly’s reappearance three days later on the 22nd, stayed their hand. Whether he had been brought willingly to the IRB meeting – the one where he was inducted into its military council and thus became privy to its plans – or was kidnaped is a matter of some debate, but it is noteworthy that the rest of the ICA initially assumed the worst.

Post-Rising, the ICA found itself on the sidelines as the Irish Volunteers, later the Irish Republican Army (IRA), dominated the subsequent struggle. Despite a short-lived attempt to expand into Cork, the ICA was always limited to Dublin and so could never match the breadth of the other force.

Though Labour provided assistance during the War of Independence and then the Civil War, and relations with the IRA remained amicable, “none of the ICA’s skirmishes were significant to the wider republican struggle,” writes Leddin. Easter Week was thus the only time the Army of Labour approached the status of a Hercules, after which it shrank to a pygmy’s.

Easter Week was thus the only time the Army of Labour approached the status of a Hercules, after which it shrank to a pygmy’s.

Still, its example lived on. The Starry Plough that the ICA had borne on its flag became part of the iconography painted on Nationalist murals, alongside the Easter lily and phoenix, during the Troubles and afterwards. Indeed:

An Institute of Irish Studies survey on the display of public emblems in Northern Ireland found that in the months of September and October, from 2006 to 2009, the starry plough was the most likely republican or unionist paramilitary symbol to be on display in Northern Ireland.

Today’s political groups prove as eager as armed ones to claim the mantle. For Labour leader Joan Burton, a granddaughter of an ICA member, Connolly’s “core vision was one of equality” which just happened to be “a vision the Labour Party had sought to fulfil from its foundation.” In contrast, Gerry Adams emphasised on behalf of Sinn Féin the anti-Imperial and anti-Partition stances of the 1916 leaders while, to Paul Murphy of the Anti-Austerity Alliance, Connolly’s importance lay in his internationalist, rather than merely nationalist, viewpoint.

If the Irish Citizen Army, then, is a question with multiple, competing answers, then this book should provide readers with plenty of material to help make up their own minds.