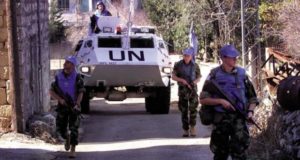 From 1978 until 2001 the Irish Army provided a battalion to UNIFIL the United Nations force in south Lebanon.

The Irish were originally deployed to south Lebanon in 1978 after Israel made an incursion into South Lebanon to try to eliminate Palestinian guerrillas operating in the area. The UN force was intended to act as a buffer between the two sides and to reconstitute the Lebanese state.

However, Lebanon was mired in a complex multi sided civil war between Christians, Lebanese Muslims and Palestinians, leftist against rightists and many other factions, which effectively meant that the Lebanese state ceased to function until after the Taif accords of 1990.

In South Lebanon, the Israelis occupied part of the border area after 1982 and the UN contingent found themselves caught in the middle of a vicious conflict between Israel and their allies the South Lebanon Army and the Shia Muslim guerrilla group Hezbollah, especially after 1985.

UN troops including the Irish came into conflict with all three parties to the conflict at various times.

In 1993 ‘Operation Accountability’ and 1996 ‘Grapes of Wrath’ Israel launched major offensives against Hezbollah and it was the Irish contingent’s job to try to prevent civilian loss of life during the fighting.

The Irish battalion was withdrawn in 2001 after Israel’s evacuation of its holding in southern Lebanon. However an Irish company was again sent to Lebanon in 2006 after a further war between Israel and Hezbollah.

Altogether, over 30,000 served with the Irish battalion in UNIFIL up to 2001 and 47 Irish soldiers lost their lives in the mission.

See also Declan Power on the Irish Army in the Congo in the 1960s.

One Response to "Interview: Declan Power on the Irish Army in Lebanon"