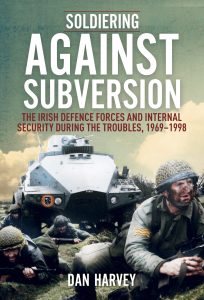 Soldiering Against Subversion: The Irish Defence Forces and Internal Security during the Troubles, 1969-1998

Day to day life for ordinary citizens in the Republic of Ireland, bar perhaps those in border communities, was generally not impacted to the same extent by the ‘Troubles’ in Northern Ireland. But over the course of three decades the conflict did become a constant consideration and forced the various governments of the day to toe a fine line.

A tough approach to republican paramilitary activity in the south was needed to ensure domestic security without appearing to be too cooperative with the British Army in the North. The front-line responders, An Garda Siochana and the Irish Defence Forces, faced real and immediate threats during this period and were forced to combat extremist operations that were becoming increasingly sophisticated.

Dan Harvey writes of how the Irish Defence Forces operated during the Northern Ireland conflict.

In ‘Soldiering Against Subversion’, Dan Harvey delves into how the role of the Defence Forces, during the years 1969 to 1998, developed in the face of a challenging and unique domestic security environment.

Harvey devotes considerable time in the beginning to setting the broader context of Northern Ireland in the late sixties, which ultimately provides the reader with a clearer rationale for how the Defence Forces responded. The Troubles produced a series of unique security threats in the Republic, some of which were one-offs that required firm and immediate action, while others were long term challenges that needed constant intelligence and upskilling.

As a former Lieutenant Colonel, Harvey goes about explaining the intricacies of both types of challenges using his insight and knowledge of the army’s inner workings. He comfortably manoeuvres between explanations of detailed military exercises like the transportation of IRA prisoners between prison and court-cases, to high-level analysis of how the Defence Forces interacted with government and responded strategically, which in turn showcases the wide range of work and duties the Defence Forces performed.

One thing that becomes apparent in ‘Soldiering Against Subversion’ is the potential for the over-spill of the Northern conflict in the 26 counties to cause utter anarchy in the south.

In chapter eight Harvey describes the high-profile prison break of three Provisional IRA members in 1973, which involved the hijacking of a commercial helicopter which was flown directly into the yard at Mountjoy prison.

Such daring exercises seem otherworldly now, but they fuelled massive propaganda victories for the IRA and manage to sum-up the chaotic tone of the time.

The Northern conflict had the potential to cause anarchy in the south.

The re-telling of the precarious scenarios that soldiers and Gardaí encountered together is a strength throughout this book, such as the kidnapping of Dentist John O’Grady in 1987 by INLA member Dessie ‘The Border Fox’ O’Hare. Though O’Grady was later freed, most of the kidnapping party, including O’Hare, went on the run.

The Gardaí, with a Defence Forces protection party in tow, learned that O’Hare was headed for Urlingford in Kilkenny, where they promptly set up a checkpoint. O’Hare attempted to ram the checkpoint with his car while shooting one-handed out the driver-side window, which forced soldiers to open fire on the car’s tyres and on the car’s passengers. It was only in these extreme circumstances, where a very clear threat to the public or their own safety occurred, that the Defence Forces could engage in open fire like this.

Harvey’s eye for military detail is complemented by a series of first-hand accounts offered by ex-servicemen that are dotted throughout. Theses insights offer another layer of detail into the specifics of Army life and operations and help explain in real terms the role they were required to carry out.

Some of the ex-soldier interviewees are named while others remain anonymous, but all show an incredible ability to re-account their exact movements, orders and thoughts during those key moments, which is a testament to the discipline and detail upon which Armies operate.

The strength of this book is in its first hand knowledge and intimate accounts of former servicemen.

One Commanding Officer’s account shows how the public seemed unaware of the Army’s preparedness to act as the last line of defence when called upon. He was centrally involved when the Defence Forces supported the Gardaí in 1981 during a protest march on the British Embassy in Ballsbridge and recalled,

‘A deputation from the demonstrators were allowed behind the Garda line to confer with the main Garda officer…..I remember the look of astonishment on their faces when they caught sight of our presence drawn in orderly ranks’

Another officer’s account epitomized the on-edge relationship between the Defence Forces and the IRA during the Troubles. He re-called the reaction of a fellow Defence Force member in a Dundalk pub when an altercation with a well-known PIRA member ended with him telling them that someday they would be shot at the crossroads,

‘He (IRA man) was totally startled when he was suddenly grabbed a hold of by the collar of his shirt by one of us and was firmly told “We won’t be shooting ye on the crossroads, we’ll be shooting ye in yer beds” ‘.

The narrative does lose focus at times by getting side-tracked into providing too much detail on the IRA and their own history and actions. On occasions Harvey’s role as an ex-serviceman dilutes his ability to accurately provide impartial analysis.

While Dan Harvey is at times too close to his subject, this is a convincing account of the role the Irish Defence Forces played during the Troubles.

For example, the working relationship between soldiers and Gardaí appears to have generally worked well according to Harvey, but the fact that Gardaí received more favourable working conditions (such as regular shift hours and overtime payments) which was not given to the Defence Forces does seem to be a bone of contention that, while perhaps valid, comes across as the venting of a grievance felt internally in the Defence Forces as opposed to something that actually impacted on the effectiveness of providing security to the State.

It raises a wider question, which is: how objective can someone be when discussing something which they were linked so closely to?

The characteristics of detailed historical research are not at the core of this book. This book is a re-telling, indeed perhaps the most significant one thus far, of a worthy and unappreciated story told through expert military insights from the author and fascinating first-hand accounts from those who experienced life in Irish Army uniform.

It shows how perhaps their greatest strength was not the growing intelligence in dealing with the terrorist threat, but their discretion and often what they didn’t do during times when the possibility of widespread violence was very real. It provides a convincing account of the nuanced and challenging role the Defence Forces played and how that contribution has been somewhat forgotten.