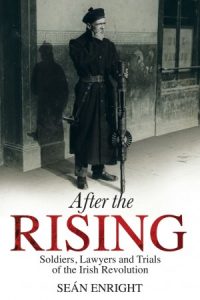 Thomas Traynor was charged with murder on the 6th April 1921 in Dublin City Hall by a military court. A small, wiry man of about forty with a long, black moustache that gave him a mournful appearance, Traynor had been apprehended at 144 Brunswick Street, the scene of an ambush on an Auxiliary patrol that resulted in the death of two cadets.

The fleeing Traynor had been rugby-tackled to the ground by a lieutenant who reported that Traynor had shouted: “God’s sake, shoot me now.” Later he had told another of his captors: “I am only a soldier like yourself.”

Enright focuses on the use of the legal system by Dublin Castle to try and contain the growing rebellion on its watch.

Under the rules of the court, Traynor was not entitled to give any evidence or be cross-examined. Not that he had much to say, only that he had been caught up in the fighting while carrying a gun – the same automatic found on him at the scene – to give to someone else. He made no attempt to explain the incriminating remarks attributed to him. All this, and his prior involvement in the Easter Rising of five years ago, ensured his conviction for murder and hanging.

If there was little doubt that Traynor had indeed been involved in the ambush on Brunswick Street, then the case of Patrick Maher could only be described as tragic. He was among those arrested and brought to trial for the rescue of Seán Hogan at Knocklong Station that saw two policemen killed in the resulting shootout.

Due to an unfortunate resemblance to Dan Breen, one of the participants in the rescue, Maher was picked out of a police line-up. His name had earlier been passed to the authorities by ‘private information’ – in other words, an informant, unusual in itself when such sources of information were fast drying up.

Maher had worked at Cleeves Creamery throughout a strike, the only employee who had done so, and it is probable that his name had been supplied to the police out of spite (he had already been boycotted and threatened). Along with another man convicted of the shootout (probably accurately), Maher was the last man executed during the War of Independence, on the 7th June 1921, four days before the Truce which would have saved him.

These are but two of the cases that illuminate Seán Enright’s study of the revolutionary period in Ireland, with a focus on the War of Independence. Enright flips the usual Hibernian-centric narrative on its head by focusing on the British perspective, making it one of the few works to do so.

Earlier studies such as William Sheehan’s Hearts & Mines: The British 5th Division, Ireland, 1920-1922 and W.H. Kautt’s Ambushes and Armour: The Irish Rebellion, 1919-1921 had also followed such a line, though these focused on the military side of things, the obvious area of study for this turbulent period with its ambushes and assassinations.

Enright eschews this approach by focusing on the use of the legal system by Dublin Castle to try and contain the growing rebellion on its watch. This leads to a quieter, more analytical read than most works, though – as the author demonstrates throughout – not one that is any less dramatic. Enright understands that stories are the building blocks of history, and here we get plenty of them.

This may not appear obvious at first, given a subject material that seems on the surface to be a dry one. Whatever its interest, Enright leaves us in no doubt as to its importance in understanding the conflict. “A unique feature of this revolution,” he writes, “was the extent to which the conflict centred on law and legal institutions which kept the status quo in place.”

Crown Courts could not longer function with juries in Ireland by 1920, so were replaced with military courts by the British.

The Crown Courts were intended to be instruments of keeping rebellion in check, yet their juries could not be guaranteed to deliver the verdicts that the British Government needed. Partly this was due to Irish Republican Army (IRA) intimidation, and the few witnesses who did come forward risked boycotts and social alienation.

A more direct approach by the IRA was the burning of court houses, with a total of forty-seven destroyed by the spring of 1920. The presiding judge of one ruined court at Borrisokane in County Tipperary, however, proved to be not so easily moved in more ways than one, as Enright describes with a fine eye for tragicomedy:

Major Dease, a hefty, old R.M. convened court in the blackened ruins. Major Dease continued to sit session, his white hair plastered to his face by falling rain. The court staff exchanged glances occasionally but no one was brave enough to say anything to the old Major.

In other cases, no coercion was needed, as local authorities switched allegiances to the Dáil Éireann and quickly made their newfound loyalties known. The Roscommon County Council served notice to landlords of court buildings that no rent would be paid for them as their services were no longer required. In Newbridge, County Kildare, the end of the old system came even more abruptly when the resident magistrate arrived one morning to find the front door to his courthouse locked.

Even the few Crown courts that continued to function did so only barely. The last politically-motivated murder trial heard by a jury was in the spring of 1920. What looked like an iron-clad case against the accused for the shooting of a policeman in Tipperary was thrown on its head when it was revealed mid-trial that the main witness for the prosecution had made an original statement that differed considerably from what he had just given.

It was in the wake of such administrative impotence that Winston Churchill urged the rest of the Cabinet to adopt harsher measures. When it emerged during the Cabinet discussion that the Irish Judiciary, still loyal to the principles of open justice, had refused to take on non-jury trials, Churchill quipped: “Get three generals if you cannot get three judges.”

That set the tone for the British response in the latter half of the War, namely the establishment of the military courts and the assigning of the British Army to do what the civilian administration could not.

The first person to be tried for murder under the new system was an 18-year old student, Kevin Barry, for an ambush in Dublin that resulted in three dead soldiers. Despite appeals for clemency, Barry was hanged.

This marked a turning point. Before, IRA defendants could have safely declined to recognise the legitimacy of the toothless courts before them. The possibility of lengthy sentences or even execution made subsequent trials a literal matter of life and death.

Even the Truce of 1921 and the cessation of hostilities did not stop the legal battles, particularly with forty-two men still on death row and over a hundred awaiting trial. Sir Nevil Macready, the General Officer Commanding (GOC) in Ireland, intended to proceed with the executions of the former and the start processing the latter, but the case of J.J. Egan, convicted by a military court for the possession of ammunition, threatened to throw a spanner in the whole works.

As briskly summarised by Enright:

The primary argument advanced for the prisoner, Egan, can be distilled in a few lines: the Crown had released the prerogative power to wage war in Ireland to Parliament by passing the ROIA [Restoration of Order in Ireland Act] to deal with the Rebellion and therefore only Parliament could embark on new measures. It followed that the whole edifice of martial law was unlawful.

Matters went badly for Macready when the Master of the Rolls ruled that the military courts were indeed unlawful, with a writ for habeas corpus issued for Egan and the prisoner to be produced in court. Macready held his ground and informed his subordinates to ignore the writ, prompting the issuing of a further writ by the Master of the Rolls for the arrests of Macready and two other generals.

After the Rising deserves to be on the shelf of any serious student of the period.

Both sides backed down with their writs the following day, with Egan released and Macready out of danger – but with the military courts, the headstone of British strategy, severely compromised in the event of further warfare in Ireland.

As the above story shows, Enright is adept at bringing out some of the more obscure details of the period into the light, leading to a fuller understanding. But research is not the writer’s only talent, displaying at times the ability to capture taut, at times gripping depictions of otherwise quiet scenes inside a courtroom.

This books appeals to a number of interests: the challenges a liberal democracy faces in confronting a war, one of the least liberal occurrences, in its midst. The weapons that a military regime, as the British state in Ireland essentially was by its end, can use – and have used against it.

Brief but evocative pen portraits of the various senior figures in authority. A study of how things fall apart with the centre slowly but surely failing to hold, no matter how much legal chicanery or brute force is applied. It is for this ability to show many things at once that After the Rising deserves to be on the shelf of any serious student of the period.

One Response to "Book Review: After the Rising: Soldiers, Lawyers and Trials of the Irish Revolution,"