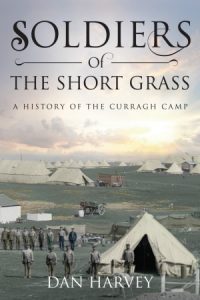 The Curragh, that flat exposed plain of 4,870 acres in County Kildare, is well-known for two things, horse racing and the army camp. Those two have sat astride local history from the earliest of ancient annals. Large-scale military encampments on the Curragh can be traced back to the end of the 1500s but there was no permanent camp there until the middle of the 19th century.

By the 1850s, as Dan Harvey points out in his new history of the Curragh Camp, Soldiers of the Short Grass, the attractions of the Curragh for military planners were plain: its geographical centrality made it an ideal location for despatching troops to any part of the island; its proximity to the capital city combined with the Curragh railway siding allowed a speedy transfer of troops from training centre to embarkation port for overseas service and the Curragh’s almost unlimited room for expansion made the establishment of a permanent military facility a straight forward decision for the British military authorities.

In attempting to provide a complete history of the Curragh Camp, the author lays out a chronological path for the reader to follow from the first permanent British Army establishment to its current use by the Irish Army. Soldiers of the Short Grass is split into roughly equal parts, with six chapters each for the British and the Irish commands.

The first section concerns itself with the British Army on the Curragh from 1855 with the construction and consolidation of the camp precinct to the handover of the barracks to the newly constituted Irish state in 1922 with stops in between for colonial wars, the inferno of the First World War, the Easter Rising, and the War of Independence.

The second section begins as British troops march out of the Curragh Camp for the final time on 16 May 1922 and Irish forces march in. It continues through the Civil War, the Emergency of the Second World War, the first UN deployment and ends with its current usage as an officer training centre for the Irish Army. While this chronological approach has its merits, it may also be useful to look at the two major themes that Harvey draws in Soldiers of the Short Grass: the training of soldiers and the imprisoning of rebels.

While the British Army had used the Curragh plains for large-scale manoeuvres prior to 1855, it was the Crimean War that finally brought about a more permanent encampment. Barracks and associated training buildings for 10,000 troops were laid out in what was meant to be a temporary move.

The soldiers’ huts may have been made of wood but very quickly these wooden barracks put down their own roots. Just two years later, the commander in chief of the British Army, the Duke of Cambridge, ordered that the Curragh was henceforth to be the principal summer training grounds for the regular and reserve armies in Ireland.

Harvey compares this Irish camp of instruction for all-arms training, cavalry, infantry and artillery to Aldershot, Shorncliffe and Colchester all rolled into one. The end of the Crimean War didn’t diminish the Curragh Camp’s importance as a training centre, helped perhaps by the seemingly unceasing colonial wars that the British Army fought in the 19th century.

The First World War broadened the training provided at the Curragh even more. As well as training many of the new Kitchener regiments, the camp also hosted a training squadron of the Royal Flying School including 25 aircraft as well as training mules for the rigours of the Western Front in its Remount Depot.

The First World War even left physical marks on the Curragh plain still evident today with Harvey calling the training trenches left behind some of the finest examples of their type anywhere in Ireland or Britain. The Curragh also served as a base for the notorious Auxiliaries during the War of Independence as well as providing the brutal Black and Tans with their cursory six weeks of training.

The handover of the camp to Irish Free State forces didn’t change this aspect of the Curragh’s military purpose, the training of soldiers continued apace during and after the Civil War. When Taoiseach Seán Lemass agreed to the deployment of Irish troops for UN peacekeeping operations overseas, an event Harvey argues that was hugely significant for the Irish Army, the Curragh was chosen as the training centre. Later still the Curragh Camp became the training base for the famous and famously secretive Army Ranger Wing.

However, in his thoughts, as a former army officer, on the current and future usages of the Curragh, Harvey is quite downbeat. He asserts that there is disappointingly no comprehensive strategic plan for the Curragh but he still hopes that “because the Curragh Camp is unique, because it has a long-established identity”, it will have a “future role and relevance…that will be driven by a strong ambition to see the Curragh Camp thrive.”

The Curragh was also consistently utilised as a location to lock up political and military troublemakers. Some of the best photos in the book, many of which were sourced from the National Library of Ireland, testify to its constant use of soldiers as jailers. Its first major prison role was in the suppression of the Easter Rising when republican prisoners were held at both Hare Park Camp and Rath Camp. At the same time began what seems to have been another Curragh tradition, escaping prisoners; two prisoners escaped from Rath Camp within the first two months and they were far from the last.

When the British Army pulled out of the Curragh, the camp’s role as prison continued without a break. During the Civil War Hare Park Camp was a prison for the anti-Treaty side and hundreds of prisoners were held in the harsh conditions of the infamous Tin Town. Here too, some prisoners tunnelled out. Later the de Valera governments used the Curragh to imprison restless and seditious IRA activists.

The Emergency was a very busy time for the Curragh as a prison camp with 1,500 prisoners passing through during the war years. The camp at that time was a peculiar mixture of IRA members, Allied soldiers and airmen and German military personnel, all segregated in different prison sections.

The British never stayed long, quickly slipping over the border to Northern Ireland but the Germans remained in the camp for the duration of the war. Not many of them complained about life as guests of the Irish nation; they could leave the Curragh Camp during the day but had to return in the evening on their honour, they had soccer and swimming teams and nine of them had the opportunity to woo and eventually marry local girls. Imprisonment on the Curragh continued up to the modern day with the military prison hospital on the Curragh precinct and at the height of the Troubles, Provisional IRA prisoners were held there too.

Harvey fills in these twin themes with some fascinating asides and anecdotes, from the frivolity of the future Edward VII and his summer of love with Irish actress Nellie Clifden, to the tragic destitution of abandoned camp wives or the terrible fate of the prostitutes known as the Wrens. He also includes intriguing facts such as that Newbridge had a masonic lodge and that Keane Barracks was secretly occupied in 1922 by soldiers training for an invasion of Northern Ireland.

During the Herrema kidnapping in 1974, the Irish Army trained for a possible incursion using Curragh Camp houses as they were identical to the hostage house in Monasterevin. He also pays fulsome and deserved praise to the sterling efforts of the Curragh Local History Group led by the indefatigable Reggie Darling.

The author also manages to chart the development of the economic and social relationship between the camp dwellers and their civilian neighbours, the local farmers, the horse racing gentlemen of the Turf Club and the inhabitants of the towns nearby. The Curragh Camp’s transformation from wooden huts to red-brick buildings in the last decades of the 19th century and the bonanza this rebuilding brought to local tradesmen and craftsmen is particularly well covered in the Soldiers of the Short Grass.

There are some occasions however where the focus on the history of the Curragh Camp falters and pages are spent on British Army rifle training or the development of military tactics. While they are interesting topics in their own right they are not sufficiently integrated into the broader narrative or the main themes.

The time spent on Mother Mary Francis Bridgeman, an alternative Florence Nightingale, in the Crimea for example doesn’t seem to have any particular relation to the history of the Curragh encampment. This languid exploration of semi-related issues has the unintended effect of condensing more directly-related incidents; the infamous Curragh Mutiny for example receives scant attention in Soldiers of the Short Grass. These digressions can also leave too little room for interrogation or analysis of the events that happened at the Curragh Camp itself.

One Response to "Book Review: Soldiers of the Short Grass – A History of the Curragh Camp"