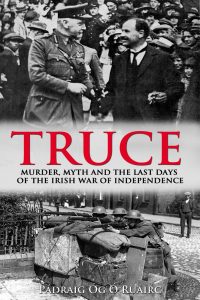 This book is about the four days leading up to the Truce of July 11, 1921 that ended the Irish War of Independence. The Truce led to the Anglo-Irish Treaty of December 1921 and, indirectly, to the political settlement that bequeathed partition, the Irish Civil War and much of the island’s political landscape today.

‘Truce’ is an in-depth, worm’s eye view of how the Truce came about. However, Padraig Og O Ruairc, as well as minutely describing the violence of these days by all participants; Republican, RIC, Auxiliaries, British Army, loyalist, also seeks to dispel what he considers myths that have grown up around the war in general and the events leading up to the Truce in particular.

Perhaps the book’s strongest chapter is the opening one, which contains much of interest on the negotiations that led to the cessation of hostilities in July 1921. O Ruairc deftly describes how earlier attempts to end the violence had come to grief, particularly in December 1920.

Beginning in 1919, the Irish Republican movement had capitialised on their election victory of 1918 to form an Irish Parliament, the Dail, and to declare an Irish Republic to be in existence. There followed a long conflict between their military wing, the Irish Republican Army or IRA and the British authorities who attempted to suppress the declared Republic and to move Irish demands back to a more limited form of self-government within the United Kingdom.

Achieving a political settlement depended on reconciling these two objectives – safeguarding Irish aspirations or British strategic interests. With neither side willing to compromise sufficiently, both sides persisted throughout 1920 and through the first half of 1921 in continuing to advance their objectives by military means.

As early as July 1920, we learn in ‘Truce’, Lord Curzon, the British foreign secretary urged Lloyd George to consider Dominion status for Ireland – that is the same status within the British Commonwealth as Canada or Australia. In October of that year Conservative MP, George Cockerill, tried through backdoor channels, to negotiate a ceasefire with Sinn Fein President Arthur Griffith.

The talks were scuppered from a number of angles, one being Father Michael O’Flanagan the Vice President of Sinn Fein, who publicly voiced the opinion that the party might accept the terms, though he had no authority to do so.

Another Catholic Cleric, Bishop Clune, almost negotiated a truce in December 1920 and found both Michael Collins and Arthur Griffith amenable to the idea. The deal stalled, however on the insistence of the British and in particular Hammar Greenwood, the Chief Secretary for Ireland, that the IRA would have to surrender its weapons and TDs who were also IRA men would not be allowed to sit in a legalised Dail Eireann. Macready the British Army commander in Ireland also voiced the belief that a truce would strengthen the IRA.

Lloyd George endorsed Greenwood’s hardline position and that was basically that as regards peace initiatives for another six months, as the British military was given the task of crushing the IRA before talks could again resume.

O Ruairc argues, rather cogently, that it was the failure of the British military to achieve the decisive results against the Republican guerrillas that they had promised and a political unwillingness on the British part to go ‘all out’ and wage total war in Ireland,  that led in the summer of 1921 to the actual truce. Under its terms the demands for IRA disarmament and the proposed limits on who could attend the Dail were dropped.

In the event, the truce was declared for July 11, 1921, after which time it was agreed that neither side would engage in offensive actions against the other or against civilians. This allowed space for the political negotiations that in December 1921 produced the Anglo-Irish Treaty.

Much of this material is new, or at least has not been aired in public before and O Ruairc deserves much praise for expanding the historiography here.

There is also strong quantative research. O Ruairc has extensive tables and figures for all the civilians killed by the IRA as alleged informers up to the Truce, broken down by name, by county and by religion and military service. This will prove of much interest and use to further researchers, as will the detailed chronicles of IRA operations leading up the Truce.

Where, however, the book ventures more into the territory of a polemic, it runs into some problems. First of all, an objective of the book seems to be to debunk some of the more populist journalistic anti-IRA accounts of the days leading up to the Truce, where, according to the likes of columnists Kevin Myers and Eoghan Harris, an IRA filled with bloodlust wantonly killed unarmed soldiers, police and civilians safe in the knowledge that they would soon be safe from reprisals.

Debunking some ‘revisionist’ stories about IRA perfidy proves very easy but the books runs up against some larger problems of interpretation.

Debunking some of these stories proves very easy to do and O Ruairc gleefully shows that for instance, four unarmed British soldiers shot in Cork city just before the Truce were not, as Myers had claimed, teenagers out buying sweets. They were in their twenties and appear to have been to the pub and it appears likely were killed in reprisal for the shooting of an IRA prisoner the night before.

An RIC constable Alfred Needham, shot in Ennis days before the Truce was not as Myers had written, gunned down on his wedding day in front of his new bride but shot while talking to a young woman who may or may not have been his girlfriend.

This is well and good as far as it goes. Myers’ columns in the Irish Times and Irish Independent and Harris’s in Sunday Independent newspapers owe rather too much to the propaganda put out by British forces at the time, and a lot more to Myers’ and Harris’s antipathy to the Provisional IRA and its political wing Sinn Fein in the 1990s and 2000s. But no one who takes history seriously is in any danger of taking them as reliable historical sources. Thus it is open to question why they are quoted so extensively in this book. If the objective is to correct a fallacious discourse in contemporary journalism then the book succeeds.

The problem is that it tends to confuse this kind of journalistic polemic with serious historical argument. So while the likes of Kevin Myers’ writing on the War of Independence may fairly be dismissed as biased and without factual support, the same cannot be said for several other important arguments made by historians.

The most important of these is the idea that the IRA, especially in Cork shot some categories of people more readily than others as informers, particularly Protestants and those who had served in the British Army. O Ruairc shows that, in the case of Protestants, they comprised 32% of the 182 victims he identifies as having been shot as alleged informers by the IRA in the War of Independence. Since 32% is roughly in line with their share of the all-Ireland population in 1921, O Ruairc concludes that sectarianism could not have been a factor in their deaths.

There is a serious problem with this reasoning. Irish Protestants were overwhelmingly concentrated in north east Ulster, but this area saw next to no Protestants (and few Catholics) shot as informers. Southern Protestants were therefore considerably over-represented in the numbers of those killed as informers – i.e. about 10% of the population but around 32% of those killed as informers. Furthermore, such figures do not include civilians killed by the IRA who were not alleged informers such, as for instance, Dean Finlay, a retired Protestant cleric killed in Cavan in a house raid in May 1921.

This does not automatically mean, as some have suggested, that the IRA was engaged in a campaign of sectarian killing, in the opinion of this reviewer and based on my own research, it was not, but it does mean that we must consider the question further.

Protestants were about 32% of the population of Ireland and about the same percentage of those killed as informers but they were over-represented among those shot in the south of Ireland.

O Ruairc here shows, in another fine piece of research, that the British accepted that 98 out of the 182 people killed as informers were indeed British Intelligence assets and paid their families compensation. It is possible that more Protestants were killed simply because they were more likely to aid Crown Forces in southern counties, but it seems unwise to assume that sectarian animosity played no part.

Similarly in the case of ex-soldiers, while, as again O Ruairc adroitly points out, detailed examination of cases shows that the IRA was not in the business of randomly targeting ex-servicemen, there is more to say, also on this cleavage within Irish society in the revolutionary years. Throughout the First World War there was the most intense animosity between Republicans and Irishmen in the British Army and especially their families – the so called ‘Separation women’. Republicans invariably blamed the latter for rioting that broke out in favour of the Redmondites at election times and also for things like the attacks on Sinn Fein offices at the Armistice in November 1918.

The question becomes then, while some ex-soldiers went on to serve in the IRA, is it possible that those who did not were more likely to get a bullet in the head, where others might by be let off with a warning, if they came under suspicion for informing?

Thirdly there is the question of ‘soft targets’. It seems undeniable that as the War of Independence went on the IRA in response to British escalation radically widened the categories of targets they were prepared to kill. By July 1921, in retaliation for British executions and clandestine assassinations of their men, the IRA was fully prepared to kill unarmed soldiers and police (which they had not done before early 1921).

O Ruairc acknowledges this, and his highly detailed listing of the casualties in the lead up to the Truce shows many examples. However he argues against the idea that the IRA turned to soft targets because they could no longer attack military targets by mid 1921. For instance, fending off claims that the IRA was no longer able to hit ‘hard targets’ he cites a litany of attacks on barracks and ambushes in July 1921.

Finally, O Ruairc dismisses the contention that the IRA took advantage of the coming Truce to kill as many of their enemies as possible, knowing that they would soon have legal immunity from prosecution. Most combatants, he argues had no idea there would be a Truce until about two days beforehand.

Thus the spike in violence that preceded that Truce was in some cases incidental (Belfast’s Bloody Sunday on July 10 in which 16 people were killed, was sparked by an ambush of an RIC patrol and the perennial tension over the Orange marching season), in some cases symptomatic of the intensifying guerrilla war and only in a minority of cases a result of either side ‘settling scores’ before the Truce. Nevertheless, by O Ruairc’s count, 57 people lost their lives in political violence in the four days from the Truce’s announcement until its implementation.

One may not always agree with O Ruairc’s conclusions, but there can be no faulting his painstaking and well documented research.

Some readers will strongly agree with O Ruairc’s conclusions, some will find his tone polemical. What is sure though is that no one in the Irish historical community can ignore such a feat of painstaking and carefully documented primary research. Leaving historical arguments aside, this book is highly valuable as a source in and of itself on the War of Independence, well written and challenging. As such it is to be recommended to scholars and anyone interested in the period.

2 Responses to "Book Review: Truce, Murder Myth and the last days of the Irish War of Independence"