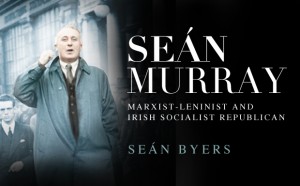 In the breadth of Irish historical study, at least that which leeches into the public psyche, the usual figures are paramount when Republican Socialism is in view.

James Connolly, Jim Larkin and Frank Ryan are usually as far as it goes, as the socialist story in Ireland is generally masked in popular memory by the struggle around the national question.

Historically, this is often framed by the Irish Labour Party’s decision in 1918 to stand aside in that year’s General Election campaign, a decision which, some have argued,elevated the national question above the social one for decades to come and paved the way for armed action to remove the British presence in Ireland.

Occasionally, TG4 will commission a show on someone like Peadar O’Donnell  and it took 40 years after her election to Westminster for a major film to be commissioned on People’s Democracy’s most famous production, Bernadette Devlin/McAliskey.  Little if any attention is paid to socialist republican history generally or to people like George Gilmore, Seamus Costello or even James Connolly’s son Roddy or daughter Nora.

Sean Murray helped to found the Communist Party of Ireland.

Belfast based author Sean Byers has decided to wade into the flotsam of the Irish Left to rescue from obscurity one of its key components, a County Antrim man who was active during the Tan War and who would lead the Russian-inspired Communist Party of Ireland in the wake of civil war.

The party’s former leader, Michael O’Riordan, is fairly well known to the Irish public and became more-so in recent years when, after Nelson Mandela’s death,it was revealed he was a key link in the 1980’s between the African National Congress’s military wing MK and the IRA (in the form of Gerry Adams) in organising training for the black South African guerrillas.

In fact, many historically and politically minded people regard O’Riordan as the founder of this marginal political party, when in fact he didn’t join until two years after its birth.

Byers correctly elevates Sean Murray, from the Gaeltacht community in Cushendall, as the man who was most key in the nascence and development of the Community Party of Ireland and the man who formulated and published its manifesto – Ireland’s Path to Freedom.

Enrolling in the IRA’s 2nd (Antrim) Brigade, 3rd Northern Division, as a teenager, Murray was active in military, political and cultural circles, combining his role as a Volunteer with membership of Sinn Fein and Chairing his local branch of Conradh Na Gaelige (The Gaelic League).

He commanded a 150 man IRA unit in the War of Independence in Antrim.

Even at this early stage, Murray showed Socialist tendencies by, in his own words, becoming ‘acquainted with Marxian literature’ by reading the works of Connolly and participating in the 1918 general strike.

During the 1917-21 period, Antrim ranked behind only Cork and Dublin in terms of bloodshed and as an active IRA Volunteer, Murray participated in the conflict in the north of the county, which reached a bloody crescendo, after the signing of the Treaty, with an attack on his native village by B Special Constabulary men in the summer of 1922, which left three men dead and many wounded in the tiny town.

Murray found himself in command of the 150 strong IRA unit in the area in the wake of this atrocity, which lives on vividly in local folk memory, but the attentions of the Unionist authorities soon meant a temporary flit to Scotland became permanent as Murray pitched up on ‘Red Clydeside’.

It was a time of increased socialist action there – indeed, Winston Churchill had recently sent tanks to Glasgow to quell dissent and Murray would  soon become acquainted with figures like Roddy Connolly who were also ploughing the Scottish Socialist furrow.

From Glasgow, he would head to London, where his Marxist education began in earnest and where links to The ‘Comintern’, the international outreach arm of the recently formed Soviet Union, would be cemented, culminating in Murray’s attendance at the ‘Lenin School’ of Marxism in Moscow, where Stalin’s influence was already being felt and where Murray would see the reality of the ‘Socialist Utopia’ on study visits to places like Dagestan.

Once back in Ireland, Murray found himself as ‘Stalin’s Man’ tasked with building the socialist vanguard.  Instead, he increasingly found a frazzled Irish Left, whose particular circumstances were shown little understanding by Murray’s dogmatic, polemicist Comintern handlers and who were plagued with interference from English Communists – who seemed to be preferred by Mother Moscow.

Murray attended the Lenin school of Marxism in Moscow and returned to re-found the Communist Party.

In the previous years, there had already been abortive attempts to establish a communist party, with Roddy Connolly trying (with help from the Comintern) in 1921, while a rival Irish Workers League was formed by Jim Larkin in 1923, on his return from the USA. Both groups soon imploded.

Byers studiously recounts this vista of split and schism and Larkin’s ‘extraordinarily troubled relationship’ with the Comintern soon had him dubbed with persona non grata status – so much so that, unbelievably, his own son was made to renounce him by his Soviet betters.

Reflecting on the state of the Irish Left over the last 100 years, this type of ridiculous schism really seems the norm.  In 1987, current Sinn Fein National Chairperson Declan Kearney, in his study of Socialist Republicanism in Ireland, contended that people could be; “…forgiven for making a pessimistic assessment of the prospects for success of Republican Socialist ideology.”

Given what the intervening 28 years has produced, it’s hard to argue with that pessimism – it’s also telling that in an examination aimed at resurrecting lost figures of the Irish left, Murray’s name is completely absent from Kearney’s analysis.

Murray and the Irish left

Reading Byers’ sketch of Sean Murray, one wonders how he maintained his sanity. While numerically outnumbered by those following the new ‘Big Two’ political parties, Irish Socialism was still on the agenda through significant developments like Republican Congress and figures like Ryan, O’Donnell and Gilmore, while a fully functioning Irish Labour Party watched as its clothes were stolen by deValera’s Fianna Fail, who attracted strong support among the small farmer class.

And herein lies the strength of this book.  It’s not really in the focus of Murray as chief protagonist – it’s much more in giving a full examination of the Irish left in a time that in recent years has been reduced in modern discourse to Christy Moore ballads.

The section on the Spanish Civil War is highly enlightening, as is the inspection of the Republican movement and the key aspects of analysis around World War II, both north and south of the border, as this book spans decades which are usually tightly compartmentalised in study.

It’s astounding, for example, to learn that a delegation of Belfast IRA men approached Fascist leader Eoin O’Duffy to lead the organisation in the wake of the Spanish conflict.

Murray ended up selling communist badges in Harland and Wolff shipyards in Belfast;  comrades got him a labourers job after he was dumped by the Comintern.

Unfolding also, the tensions between Communists, north and south, straining under the weight of partition and oddball activists like Harry Midgely.

By this stage, Murray had found himself increasingly more marginalised, or ‘Pushed Upstairs’ as one chapter marks – much to the anger of contemporaries such as Peadar O’Donnell.  As the 50’s rolled on, he remained in an isolated, inert, paternalistic role, usurped by younger voices from places like ‘Red’ east Belfast.

It really is hard to fathom why he bothered – particularly as the 1940’s were marked with bouts of real poverty, heavy drinking and the, presumably, soul destroying relegation to selling communist badges in Harland and Wolff shipyards in Belfast;  comrades had squared him off with a labourers job after he was unceremoniously dumped by the Comintern.

On his death in 1961, the cutting of ties between north and south in all real senses was complete, with separate manifestos dealing the death blow to the vision of a united Communist project across Ireland.

A committed Soviet Communist until the end, his last visit to Moscow taking place a year before his death, he remained popular with international comrades, even if he was a peripheral figure, in a real sense, at home.

Despite this, his seemingly excellent writing has been frozen in history in pages of famed Irish periodical The Bell, alongside Flann O’Brien, Jack B. Yeats and Patrick Kavanagh, as it was compiled and edited by his constant admirer Peadar O’Donnell.

As a time-served IRA Volunteer, Murray never relinquished his hatred of the Irish border but he maintained a fundamentally Marxist interpretation of its creation and maintenance – calling out bourgeois nationalists in the south who were happy to profit from its implementation to cement their positions in the backwash it created.

Much to ponder also when reflecting on the position of the modern Republican movement and its journey over 40 years, where Gerry Adams, who was once plastered on the front page of Living Marxism, now leads a party campaigning for reductions in corporation tax.

Murray is well worth the study, but without question, he will sink back into the mists of Republican Socialism with the rest of the incorrigible left in Ireland’s Socialist story. That said, I doubt this will stop Byers in his revelatory investigations – as some stories really need to be told – and I look forward to other books in a similar vein from the author.