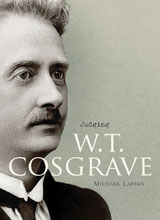 Judging W.T. Cosgrave is the third in the Judging X series and the first to be on a non-Fianna Fáil figure, the previous two being about Éamon de Valera and Seán Lemass. The book launch was notable in the presence of Taoiseach Enda Kenny; likewise, the one for Judging Dev in 2007 was attended by Bertie Ahern: statements in themselves about how Civil War politics continues to define the contemporary sort in Ireland.

It is hard, after all, to imagine either of the two party leaders ‘crossing the floor’ by attending the other book launch. Cosgrave, de Valera and Lemass may be long dead, but the ghosts of their wars continue to be felt today.

Cosgrave was a man gravely underestimated, at first, by his political enemies.

History has judged Cosgrave to be something of a ghost himself. After all, this book had to have Cosgrave’s full name in the title, as opposed to de Valera needing only Dev for his. Why this would be the case, Laffan seems reluctant to explore. He is, after all, more focused on praising his subject than reminding his readers why such praise had been lacking before.

Perhaps it was due to being sandwiched between the overwhelming presences of Michael Collins and de Valera, or people equating his calm, judicious manner with a lack of charisma. A mocking cartoon from 1927 that features in Laffan’s book as a double-spread is of a sleepy-looking Cosgrave painting a portrait of himself striking a ridiculously heroic pose before a slain dragon and a damsel in distress.

Such mild appearances were deceiving. Upon the sudden deaths of Arthur Griffith and Collins in 1922, the newly-chosen chairman of the Free State cabinet found himself with the unenviable task of heading a government under siege. His enemies were initially contemptuous: de Valera dismissed him as a “ninny”, while Rory O’Connor courted hubris in believing that Cosgrave could be “easily scared to clear out.”

But they had badly underestimated Cosgrave’s spine which, when stiffened, could be a fearsome thing. The executions of Anti-Treatyite prisoners, including that of the cocksure O’Connor, shook the Civil War opposition enough for its previous policy of targeting Dáil deputies to be abandoned.

Cosgrave was bothered by the official use of the term ‘reprisal’ and its connotations with the Black-and-Tans, but otherwise he complained at how the state executions had been limited to a few counties, leading to the mistaken impression that the rest of Ireland was peaceful.

Any failure to implement such strategic executions, in his opinion, was the equivalent of losing a battle. The Civil War was a life-or-death struggle for the newborn Free State, and Cosgrave was not going to allow the “dregs of society”, as he came to call the other side, to get in the way of running a country.

As this is a biography and not a general history (for that, readers may be interested in Ciara Meehan’s The Cosgrave Party), Laffan skims over a lot of weighty issues concerning the decisions of the Cumann na nGaedheal government, with only a reference to what his subject thought about particular ones. Nonetheless, what is striking is the extent that state policies reflected Cosgrave’s personal inclinations.

With the Irish language, he was game, and his government took steps to make it compulsory. But his own was never more than patchy and went no further than signing the minutes of Cumann na nGaedheal meetings in Irish. Even this token gesture was dropped after the party lost power in 1932 and he switched to signing them in English. He may have liked to talk about the Gaelicization of Ireland, but lacked the commitment to enforce anything substantial, much like the country in general.

In any case, Cosgrave was more interested in balancing the books. He told Cumann na nGaedheal members that their priorities were to ensure “an ordered society, hard work, constant endeavour”, among others, and these Spartan tastes were reflected in the fiscal conservatism of the government.

Similarly, the Free State’s policy of integration towards ex-Unionists was as much a reflection of Cosgrave’s moderate instincts as it was a need to build a working Ireland with as much support as it could get.

Cosgrave’s priority, as the first premier of the Irish Free State was to balance the books. Cultural and nationalist goals took second place.

The choices of state symbolism are the most fun to read, probably as much as they were for the cabinet to discuss: the artist designing the pig that was to feature on the half-penny coin was requested to reduce the fullness of its jowls. Why this should be important is not stated. One is minded of a trainspotters’ convention or the debates of Tolkien enthusiasts on whether the Balrog had wings.

Other choices on symbols are all too illuminating: the official seal of state would be a harp but not one, God forbid, with a female figure included. Catholic morality was the order of the day. Cosgrave saw to it that the new coinage would feature only ‘profane’ images, as opposed to religious ones, given the worldly ways money could be used. This was still too much for one priest who ruminated against the coins as “the thin edge of the wedge of Freemasonry sunk into the very life of our Catholicity.” Quite.

Cosgrave proposed a’Theological Board’ as an additional house of the Dáil, whose role would be to debate whether any proposed legislation would be “contrary to Faith and Morals.”

This priest was not to be the only clergyman vocal on how the state should be run. An eager-to-please, almost servile consideration to what the Church hierarchy thought was to be a regular feature of Cumann na nGaedheal. Particularly disturbing for this reviewer to learn was Cosgrave’s proposal in February 1921 of a ‘Theological Board’ as an additional house of the Dáil, whose role would be to debate whether any proposed legislation would be “contrary to Faith and Morals.”

By Faith, this, of course, meant the Catholic one. Mercifully, his fellow cabinet members thought this was a step too far, but if Ireland had avoided the route to theocracy it would still become one in all but name under Cumann na nGaedheal and its successor governments.

Laffan reminds his readers that no government then could have defied the Church and survived, and indeed none did until very recently. Even so, whether it was proposing to Dublin Corporation as early as 1915 that it work with the Dublin Vigilance Committee on the subject of objectionable films or the Archbishop of Dublin being sent on request an advance copy of the 1922 draft constitution, Cosgrave was only too happy to oblige.

In fairness to the man, he did his best to resist the worst examples of fanaticism, such as the case of Letitia Dunbar-Harrison, the Mayo librarian refused a position due to her Protestantism. Even if Cosgrave ultimately had to resort to the strategic retreat of transferring Dunbar-Harrison out of Mayo and into the Department of Defence, his attitude that “we Catholics ought not to fear Protestants”, however plaintive, was in favourable contrast to de Valera’s opportunistic support for the Mayo sectarianism.

Dunbar-Harrison, for all that, only held her new post in the Department of Defence briefly, as she soon married and was thus obliged to resign, another sign of the times that makes us lucky to be in the present one.

Laffan skims over events such as the Army Mutiny of 1924, Fianna Fáil’s taking power in 1932 and the Blueshirts.

Laffan skims over the more well-known parts of Cosgrave’s career, such as the Army Mutiny of 1924, relationships with other Cumann na nGaedheal stalwarts such as Kevin O’Higgins and Richard Mulcahy, his later role in opposition after Fianna Fáil took over power in 1932 and the subsequent merger with the Blueshirts.

Laffan has little original to say about the Blueshirts, one of the most controversial and hotly debated elements in modern Irish history, and is content to quote other historians’ conclusions that they were less of a Fascist movement and more of an anti- Fianna Fáil one. Cosgrave’s interest in them was limited to their strategic, not ideological value, a “prospect of achieving unity against de Valera”, and certainly it is hard to imagine a man who was content with a democratic transition of power at his expense having much sympathy with totalitarianism.

Unlike some of his Fine Gael colleagues, he disdained wearing the Blueshirt uniform in the Dáil, and kept a cautious distance from Eoin O’Duffy even while obliged to publicly praise his party leader on occasion.

As opposition leader, the same calm, unpretentious traits that had served him well as a nation-builder came to be seen as liabilities

As opposition leader, the same calm, unpretentious traits that had served him well as a nation-builder came to be seen as liabilities in an increasingly stagnate and directionless party. Laffan makes no excuses for Cosgrave’s later failures as Fine Gael leader, leaving the reader to watch as the hero fades away into a not-so-golden sunset of political irrelevance.

His death in 1956 was met with indifference by the Fianna Fáil government who did not even bother to send a representative to the funeral. A notable exceptional was Seán Lemass, who praised in the Dáil the “privations and sacrifices which he endured so that national freedom might be ours.”

In many ways, as Laffan notes, the two men were kindred spirits to the point, it was claimed, of Lemass modelling his style of debate on that of Cosgrave. Both were quick to praise the practical qualities in the other – practicality being amongst the highest of virtues for both – and both their respective governments sought to be meritocracies rather than the usual clientelism of parish-pump politics.

Yet Lemass has been highly regarded to this day while Cosgrave is remembered, when he is at all, with not much more than polite respect. Perhaps Cosgrave had been in the wrong party after all, and would have belonged more in Fianna Fáil where his talents could have been better realised? Or is that a ‘step across the room’ too far to contemplate?