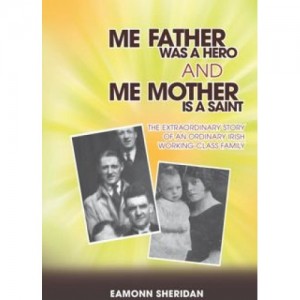 Me Father was a Hero and Me Mother is a Saint

For anyone interested in the social history of Dublin this book will be a beneficial read, although if you have read Gene Kerringan’s Another Country or Bernard Neary’s Waiting for the 22 then Eamonn Sheridan’s Me Father was a Hero and Me Mother was a Saint will probably feel very familiar.

The author gives his account of life in a working class family living firstly in Cabra and later in various parts of northern England.  His ‘Dublin’ section of this book is filled with the famous names of Dublin folklore, like the notorious wannabe cowboy Bang Bang, and the infamous and brutal Dublin police man Lugs Brannigan and others more synonymous with Cabra such as Dickie Rock.

But the book also demonstrates how people coped with the newness of big housing estates removed from the familiar and familial surroundings of the city centre tenements; a subject which was previously written with great wit and poignancy by Dominic Behan in his tribute to his brother in My Brother Brendan.

Here Sheridan tells a similar story but from the perspective of the north-side; he goes through the familiar stories of the brutality of school, visits to the local cinema to watch mostly Westerns, the outdoor public baths, habitual stealing from the local orchards, the sightings of Bang Bang and the over the top reverence that was offered up to Lord Mayor Alfie Byrne.  He describes a working class population who expected more from Independent Ireland, who mostly lived in poverty and were treated like children by the Church and political elite, who in turn were bent on keeping them in their place.

Eamonn Sheridan’s father fought in the War of Independence and the Civil War.  He described the signing of the Treaty as “the greatest tragedy to ever afflict our nation”.

Sheridan’s book begins with an insight into that disappointment written in the words of his father, James Sheridan, a devoted follower of Eamonn De Valera, who joined the Fianna scouts in 1917 and later the IRA and went on to fight in the War of Independence and the Civil War.  He described the signing of the Treaty as “the greatest tragedy to ever afflict our nation”.  The first two chapters, written by the author’s father and are well worth a read for students of the Irish Revolution.

The author’s own memoir begins in chapter three where he talks of his early years in Cabra and the family stories of life in Dublin’s tenements; a collective memory he shares with many working class Dubliners. The poverty, disease, the awful smells and the tragedy of so many cot deaths are all covered and indeed Kevin Kearns oral history of the Dublin Slums is referenced a number of times.

Life in Cabra for a working class family in the 1950s has been well documented by Gene Kerrigan among others, and Sheridan has little to add to the narrative apart from coming from a much larger family with a father who had a son from an extra marital affair.   Sheridan delves into much the same subject matter as Kerrigan and Neary.

Sheridan recalls the terrible poverty of the Dublin tenements in the 1940s and the subsequent relocation to suburban housing estates in Cabra.

He discusses his recollections of growing up in the 1940s and 50s, through the ‘Emergency’ and the repressive and poverty stricken times that defined the 1950s.  But his story is not glum, like many others who recall their lives in these times he remembers being happy, a life filled with family and friends with plenty of social life and a strong and protective community.

Life beyond Cabra is experienced when Sheridan’s parents decide to relocate to Birmingham, giving the reader an insight into another aspect of Irish working class life, emigration. The suburbs, towns and cities of Northern England were home to many Irish people and most of us know through our own relatives how England became an economic sanctuary for so many.

The Sheridan’s experience is interesting because the father of the house and the ‘Hero’ in the title served in the British army during World War II.  The controversy of Irish men serving in the British State forces  during this time is well documented.  Sheridan’s father was a strong nationalist and republican and was part of a military struggle against imperialist Britain, the fact that he went on to serve in the British army was not unique, it was an economic necessity.

Life in Birmingham for the Sheridan’s was spent lodging in red bricked, old industrial revolution erahouses, which he described as being in a bad state of repair.  The author never came to understand why his family decided to relocate believing that somehow debts and moneylenders were an impetus for the move.

In Birmingham life was if anything harder for the Sheridans, but at least there was work.

“I cannot understand even today, why my parents left a lovely three-bedroomed house of their own to live in lodgings.  We had gardens back and front, a bathroom and toilet as an integral part of the house.  The location was bright, airy, and convenient for the city with a good bus service. This was all given up to live in digs in an unfriendly city still recovering from the effects of the Second World War.”

He got his first job in England at a paper company, a subsidiary of Wiggin’s Teape and describes how his co workers viewed him as a bit of a curiosity because they had never known of an Irish person working in an office, they assumed they only worked on building sites. He also took up a part time job at a local pub where he had the experience of a customer ordering a black and tan much to his dismay. A misunderstanding that passed with some humour but could have turned nasty.

Sheridan’s father the IRA veteran of the 1920s served in the British Army in the Second World War.

After two years in Birmingham the family relocated again, this time to Oldham which Sheridan described as being in “the Stone Age”.  The reason was to be closer to his elder sister and her family.  He runs through his memories of this new home town in much the same way as he does his stay in Birmingham.  A recollection of everyday life and work, girl friends, family occasions and so on. Until his marriage in 1957 to his girlfriend whom he had met in Birmingham.

He returns with his wife to live and work in Birmingham for a spell and relays some of the anti Irish sentiment and casual racism that he experienced there. He  qualifies this however with his personal belief that there were more decent English people then the other sort, and those who had served in the armed forces had a deep respect for the Irish, many of whom, like Sheridan’s own father, had served along side them in the war.

His brief stay at Newport in Shropshire is described as happy with his participation in the church choir and running a local Judo club being his personal highlights. His stay is cut short by a job offer which tempts him back to Dublin where the memoir continues in a somewhat predictable way with accounts of the everyday struggles of raising a family, paying debts, working hard and so on.

The first section of the book is an interesting personal account of the  Irish revolution. The rest of the book is a decent personal memoir, a social history of Dublin and examination of Irish emigration

The first section of the book will interest many because of the personal account told by the father of his first hand experience during of the turbulent decade of the Irish revolution. This is given a further twist by his disapproval of the military displays in the years afterward, which may interest those looking towards the 1916 Centenary Celebrations and his controversial decision to  later join the British army and serve in World War Two. The rest of the book is a fairly decent personal memoir, a social history of Dublin and examination of Irish emigration.

However, I do take issue with Sheridan’s explanation for his title, the sainthood tag for his ‘Mammy’ is based on the number of children she gave birth to.  Of Course Sheridan is  not the only Irish man to tag his mother in this fashion, the sainthood of the Irish Mammy has been around for some time.

But it’s getting old, and in this day and age I think most would agree that it only serves to avoid the reality of the limited choices most women faced with government restrictions on birth control, amongst other repressive policies. The state conspired to sideline women to limit their participation in society which in a lot of cases caused great suffering and depression and there is huge sadness in this.  And maybe they did n’t want to be saints and let’s face it, they weren’t, maybe recognising the ‘hero’ in our mothers would be more appropriate and more honest.