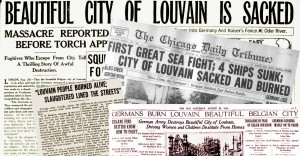 Stephen McGarry on the ‘Rape of Belgium’ in 1914 and Irish participation in the First World War.

August marks the centenary of the start of the First World War when the Germans invaded neutral Belgium. The heavily outnumbered Belgian Army bravely held the invaders back around the ring of forts around the city of Liège before they were finally overwhelmed by the larger German force. The Belgian Army had put up such stiff resistance that the Germans rounded up local inhabitants from the surrounding villages and shot and bayoneted around 850 men, women and children.

The German Army then advanced into Belgium and as they marched through the country’s interior the exhausted troops, often under the influence of alcohol, burned and pillaged the towns and villages they passed. Notable atrocities occurred in Aarshot and Andenne, and in the small industrial town of Tamines where 383 citizens were killed, while in Dinant 674 people lost their lives. However it was while German troops were stationed in the beautifully preserved medieval University City of Leuven (Louvain in its French name) – known as the Oxford of Belgium -that the most infamous atrocity occurred.

On the evening of the 25th of August 1914 shots rang out through the city, the German troops who were stationed there thought they were being attacked by civilian irregulars known as ‘franc-tireurs,’(it was later established that the shots were fired by a nervous company of German conscripts on their own troops).

All hell broke loose for three days while the Germans sought revenge and went on the rampage,they rounded up and shot 248 citizens dead and set over a thousand buildings in flames, including the 15th Century Saint Pieter’s Church but luckily the late Gothic magnificent Stadhuis (city hall) was saved as it was used by the Germans as a HQ.

The University Library was deliberately burned to the ground, resulting in the loss of hundreds of thousands of rare and ancient manuscripts and incunabula which caused worldwide consternation.

In their invasion of Belgium in 1914 the Germany Army, which anticipated widespread civilian resistance, widely used what they described as ‘terror tactics’ to terrify potential guerrillas. In all, they killed 5-6,000 Belgian civilians in reprisals.

The Allies used the accounts of mass executions and rape to mobilise support for the British war effort.The burning of Leuven’s Library was held up as a symbol of German barbarism, and the atrocity was also used in Ireland by the British War Office on recruitment posters calling for Irishmen to ‘answer the call’ and come to Catholic Belgium’s aid.

Leuven was a city with significant historical and cultural links with Ireland and perhaps the most ‘Irish’ city on mainland Europe. Irish missionaries were credited with restoring Christianity to Europe following the collapse of the Roman Empire which plunged the Continent into the Dark Ages. They were also very active in Belgium where the patron saint of the city of Mechelen was an Irish missionary called Rombold (Rombout in Dutch).

In 1538 the first of many thousands of Irish students was registered in the university and several Irishmen held esteemed professorships there such as Dermot O’Hurley, Peter Lombard (who was later the Archbishop of Armagh) and Thomas Stapleton (There is a memorial to him in the rebuilt Saint Pieter’s Church). Later on in 1607 Hugh O’Neill and his retinue spent time here before going to Rome to enlist help for their cause from the Pope following their departure from Ireland in what became known as ‘The Flight of the Earls’.

Many Irish nationalists were genuinely shocked by the atrocities against Belgian civilians, perceived as a fellow small Catholic nation.

Several Irish religious houses were founded in Leuven, the Dominicans and the Franciscans not only trained priests but also acted as unofficial embassies and supported the Irish community in the Low Countries in Penal times and maintained strong links with the Irish Brigade of France.

The Irish friars were also custodians of Irish culture as the first book in Irish typeface was printed in the Franciscan College ofSaint Anthony’s in Leuven.  Michael O’Cleirigh compiled The Annals of the Four Masters and Aodh Mac Aingil wrote widely in Irish there. When Belgium formed part of the Spanish Netherlands, Owen Roe O’Neill’s tercio (regiment) in the Spanish Army under Thomas Preston in 1635 distinguished themselves in the defence of Leuven when it was attacked by a Franco-Dutch army.

In Ireland, German aggression to neutral Belgium, a small Catholic country like Ireland, struck a chord. Fired up by Allied propaganda, many Irish nationalists, who would otherwise have been opposed to joining the British armed forces, supported the Franco-British Alliance against the German aggressors. The Catholic Bishop of Kildare wrote to The Irish Times that, ‘It becomes the duty of all faithful Christians to come to the aid if the armies that are fighting on the side of justice and right.’

Irish Parliamentary Party MP Thomas Kettle was in Belgium on the outbreak of war and on the 6th of August 1914, wrote that it was a war of ‘civilisation against barbarians’.

John Redmond the leader of the Home Rule Party at Westminster encouraged his followers to enlist in the British Army, believing that Irish nationalist support for Britain’s war effort would strengthen the case for Home Rule for Ireland after the war. However German conduct in Belgium was also a significant theme. He told his followers in August 1914; ‘the spectacle of a small nation making these heroic sacrifices in defence of their independence and their honour appeals in a very special way to the sentiments and feelings of Ireland…the people of Ireland are in sympathy with Belgium and they are willing to do everything in their power to assist her in the maintenance of her independence’.

The Irish Volunteers, the military organisation formed by nationalists in 1913 in response to the loyalist Ulster Volunteers, now split, the larger of whom, around 150,000 – 170,000 men, followed Redmond to form the National Volunteers and around 26,000 of them enlisted in the British Army.  A more militant minority of around 9,700-11,000 broke away and formed their own force, retaining the name of the Irish Volunteers under Eoin McNeil and who would receive their own baptism of fire in Easter week in Dublin, 1916.

While the German atrocities in Belgium were exaggerated in Allied propaganda and for this reason discounted altogether in some circles after the War, they were real enough in 1914 and induced many nationalist Irishmen to join up.

Leuven and the Irish College today

The Franciscan Irish College was suppressed in the aftermath of the French Revolution and now houses the Leuven Institute for Ireland in Europe, who actively promotes a wide range of Irish studies with the Katholieke Universitet Leuven and other universities throughout mainland Europe.Today Leuven still retains strong links with Ireland, there is a vibrant Irish community – and of course the obligatory Irish pub – and one frequently hears Irish accents in the city. The university library featured an exhibition on the ‘The Flight of the Earls’ on their 400-year anniversary in 2007 with an Irish music concert in the city’s grotemarkt (main square) while another exhibition featured the writer Samuel Beckett.

Leuven rose like a phoenix from the ashes and through the generosity of American colleges and universities rebuilt her library in the neo-renaissance style of the Low Countries and under the terms of the Treaty of Versailles, Germany was required to donate thirteen million marks worth of books in reparation leading to 900,000 books on the shelves. The damaged buildings of Leuven were also rebuilt and lest we forget – each building retains a relief on the gable wall featuring a sword against a backdrop of flames with the year ‘1914.’Alas!

History repeated itself in 1940 when the Wehrmacht occupied Leuven the library and its contents went up in flames again, but was rebuilt and now happily houses more than one million volumes.

5 Responses to "The Sack of Leuven and Irish participation in World War One."