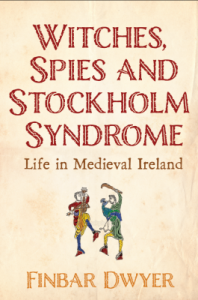 Medieval Ireland is a world that is lost to us in more ways than one. Not only must we contend with distance in time, the background and rhythm of everyday life is utterly alien to our 21st century experience. The mental roadmap we tend to have of Irish history – English conquest versus Irish quest for liberation is likewise of little use. Contemporaries did speak of ‘Irish’ and ‘English’ at each others throats following the Anglo-Norman conquest of the late 12th century, but both of these categories are quite different from what they would mean in later centuries.

Medieval Ireland is a world largely lost to us. Dwyer’s book is an attempt to bring ordinary life in he middle ages back into focus.

‘Irish’ meant the Gaelic speaking population, that had its own culture and laws, and which was largely displaced from the best land by the Anglo-Norman conquerors. ‘English’ meant the colonists, a very large proportion of whom, going by their surnames, in fact spoke French (and some Flemish Italian and other languages) as well as English, who controlled some 60% of the land by 1250. However modern ‘Irishness’ (ethnically mixed and predominantly English-speaking) is actually a composite of both of these groups, whose common identity was defined by a common adherence to Roman Catholicism and in the 16th and 17th century struggles against the post-Reformation Protestant English state.

Much of daily life in Gaelic controlled areas of medieval Ireland remains clouded due to the fact written sources in the Irish language largely record only the doings of the military, landed and religious elite. Add to that that most of the English language records of land deeds, courts, local government and so on pertaining to the Anglo-Norman controlled regions was lost in the destruction of the Pubic Record Office at the battle at the Four Courts in 1922 and our window into medieval life becomes more clouded still.

Finbar Dwyer’s book ‘Witches Spies and Stockholm Syndrome’ is an attempt to correct this and to bring the lives of ordinary inhabitants of medieval Ireland to life for a modern audience. Due to the limitations of the sources he is mainly limited to chronicling the area around Dublin and other predominantly Anglo-Norman areas such as the south-east and the towns of Waterford, New Ross and Kilkenny in the period 1170-1370.

The period in question saw the rise and decline of Anglo-Norman Ireland. Under the famous Richard de Clare (popularly known as Strongbow) and other military leaders Anglo-Norman adventurers initially succeeded in conquering much of the country including virtually all of its eastern seaboard by the mid 13th century.

However due to a series of calamities in the 14th century – economic decline, endemic warfare with the Gaelic Irish and above all Scottish invasion from 1315-1318 and the arrival of the Black Death in 1348, the end of the 14th century saw the colonial population devastated, reduced  to shrinking fortified settlements (the Pale around Dublin was in fact a product of the following century but its antecedents were already there) and the Gaelic families, striking from their bases in mountain and bog, gradually taking back territory their forefathers had lost.

Some 60% of people did not live past 35 in medieval Ireland, according to Witches, Spies and Stockholm Syndrome

Dwyer’s book is not a narrative history of these events but rather a series of snapshots of daily life taken against this background. We find that even in good times, life in medieval Ireland was, to quote Thomas Hobbes, ‘nasty brutish and short’. It is somewhat sobering for this reviewer in his 33rd year to discover that had he lived in the middle ages some 60% of his acquaintances (and very likely he himself) would have been dead by this point in his life.

Violence played a role in this. As well as warfare, both regular and irregular, Dwyer’s book is replete with tales of heads and bodies mutilated by axes, swords and knives, often when such lethal weapons were mixed  in taverns with alcohol, sexual advances, jealously and bruised pride.

A much greater killer of course was poor diet and ill health. Dwyer records that in 13th century Dublin, while the rich could dine on delicacies from all over Europe and further afield, the working poor in good times subsisted on kind of vegetarian mash and poor quality bread. The latter was at least partly responsible for their poor dental heath (the unprocessed pieces of grain broke their teeth), leaving them often with broken teeth and in some cases with stumps worn down to the gums. This was not just unsightly, infections which started in the teeth could lead to death.

Nevertheless all was not grim. Work in an agricultural economy was seasonal, intense in the summer harvest season but relatively lax in the winter. This gave medieval inhabitants of Ireland much leisure time which they used, Dwyer tells us, to play sports such as forms of football and hurling (zealots of the GAA might note that these both took place in Anglo-Norman County Dublin rather than the Gaelic hinterland). They also enjoyed frequent religious festivals, which often to the dismay of the ecclesiastical authorities they spent drinking and carousing rather than at prayer.

The 14th century saw the decline of Anglo-Norman Ireland and also a new harshness against ‘heretics’ and ‘witches’.

This does not mean the medieval Ireland was not a religious place, as all sectors of the population tended to be devout Christians. However, we see in Witches Spies and Stockholm Syndrome that this did not mean everyone was submissive to the Church authorities. For one thing, as Bishops in particular were also secular authorities in many areas, they were subject to public riot and protest at unpopular policies as much as any other ruler.

Secondly Anglo-Norman and Gaelic Irish churchmen though theoretically part of the same church, rarely got along. And thirdly, some Gaelic Irish ‘outlaws’, we learn were reported to have returned to earlier pre-Christian beliefs in the 13th century, such was their disillusion with the church as established. Dwyer, indeed reports one such case, in which Adam Dubh O’Toole was tortured to death in Dublin for ‘heresy’.

This is an engaging book book but might have worked a little better with some more chronological narrative.

The witches, spies and Stockholm syndrome in the title of Dwyer’s book all come from towards the end of his period as the Anglo-Norman lordship was hit by crisis after crisis. This seems to have coincided with an increased persecutory religious zeal  that was arriving from continental Europe. In 1308, the Knights Templar, the warrior order whose role had been to defend Crusader conquests in the middle east, were purged in Ireland and their extensive property seized, as it had already been across Europe. There they were generally executed as ‘heretics’ after Stalinist-like show trials. In Ireland they were merely imprisoned, but their demise was harbinger of further religious persecution.

The witches of the title were a series of women tried on highly dubious grounds for heresy and witchcraft in the south east of Ireland and in several cases executed in the early 14th century.

Women also became protagonists in the ongoing low-level warfare between Gael and Gall (‘foreigner’) in the 14th century. Through Dwyer’s book we see that several, particularly in strife torn Wicklow and south Dublin were executed as spies for guiding Gaelic Irish raiders in their assaults on the colonists.

Finally ‘Stockholm Syndrome’ (whereby a captive comes to identify with his captors) refers to the career of one Henry Crystede, an Englishman captured in battle with the O’Tooles of Wicklow in 1368 and who later wrote glowingly of  his captors.

This is an engaging book, and a good introduction to medieval Irish history. I particularly enjoyed those chapters which ventured outside of Ireland to demonstrate the broader European and world context. However I felt the book would have worked a little better had the snapshots from daily life been interspersed in a general narrative of the period and still made the same points, but placed the reader in a more easily navigable mental terrain. As it is, the switching back and forwards in time can be a little confusing. Also a little more could have been made, I thought of Irish language sources.

Those caveats aside, Witches Spies and Stockholm syndrome remains an interesting insight into a fascinating and long gone medieval world.