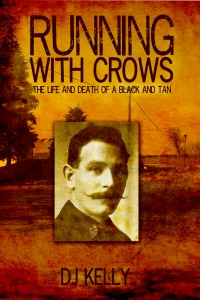 Running with Crows, The Life and Death of a Black and Tan

The Black and Tans, or Temporary Constables, employed during the Irish War of Independence to bulk up numbers in the besieged Royal Irish Constabulary, have lived under the shroud of stereotype in Irish folk memory.  Thugs, convicts sprung from British jails and unleashed upon the citizenry of Ireland like so many dark, avenging angels.  Drunken, violent, unhinged by war, the Black and Tans, and their even more (rightly) despised, Temporary Cadet colleagues in the Auxiliaries, have only recently been examined by historians searching for a more complex and rounded view of the men Irish history has so long vilified.

DJ Kelly’s ‘research-based novel’—more on this anon—Running With Crows is just such a noble endeavour though, ironically, the subject of her book is a man who in many ways exemplifies the stereotype of the reprobate Tan rather than disproves it.  Nonetheless he is a fascinating character and well worthy of biographical examination.

As the only member of the Black and Tans or Auxiliaries to be executed for crimes committed during the War of Independence, William Mitchell had a multitude of criminal convictions both as a soldier and civilian prior to coming to Ireland

As the only member of the Black and Tans or Auxiliaries to be executed for crimes committed during the War of Independence, William Mitchell had a multitude of criminal convictions both as a soldier and civilian prior to coming to Ireland as a Temporary Constable.  The reader is led to believe that he was a strong arm robber and all-round, knockabout ‘tea leaf’ in Bermonsey, London, as well as a deserter from the Army.

The reader is led to believe that he spent most of his days during the Great War either tethered to a wagon wheel on Field Punishment 1 or serving sentence in Abancourt Military Prisonfor drunken insubordination.  But the reader is never certain of any of this, merely led to believe, because Kelly has given us Mitchell’s life in the form of a ‘research-based novel’rather than as straight, narrative biography which would have served the subject far more judiciously.

This failure of the chosen medium with which to tell this Black and Tan’s story is important because there is much that is fascinating about the life of William Mitchell.  Born to a Protestant mother and English soldier father in Dublin’s red light district of Monto, Mitchell is presented as a man with no homeland.  His religion, Kelly would have us believe, marked him as different from the majority of his fellow Irishmen and his Irishness marked him as an outsider in the London he moved to when his father left the army.

It was there, in Bermondsey where the boy became the man, fell into or continued—depending on your acceptance of fact rendered as fiction in the narrative—his life of petty crime before joining the British Army and posting to India.  Upon his regiment’s return to England, Mitchell apparently deserted from the Army before re-enlisting—again, apparently—under his own name, at the commencement of hostilities in 1914.

Like virtually all of the Black and Tans and Auxiliaries who served in Ireland, William Mitchell saw action in the Great War—though not as much as he might have had he not spent the greater part of the war tethered to wagon wheels or serving nine months in military prison—before being wounded by a shell blast at the defence of the Crozat Canal and medically discharged from the Army.

Mitchell then returned to London where, in the course of robbing timber meant for the war effort in France, Kelly has himmeeting the woman he would later marry and who would give birth to his only child, a daughter, as he awaited his execution in Dublin.

TC William Mitchell, Kelly would have us believe, was a sacrificial offering to the gods of a press, both in the United Kingdom and Ireland, increasingly critical of the outrages perpetrated on the Irish by these special police constables.  Found guilty by courts martial of the murder of a local magistrate in Dunlavin, County Wicklow, during the course of an armed robbery, William Mitchell was, indeed, hanged on 7th June 1921, in Mountjoy Jail.

The reader is never certain whether they are reading facts or not because Running With Crows reads at once like narrative non-fiction—and it reads very well as such in places—with a fictional narrative woven through it somewhat haphazardly.

We know this because it is part of the historical record.  Much else that I have cited above, is, I imagine, true:  his place of birth, parentage, criminal record and desertion, re-enlistment and war service; Mitchell’s treatment with Salvarsan for ‘Venereal Disease, Syphilis—mild’, for example.  But the reader is never certain because Running With Crows reads at once like narrative non-fiction—and it reads very well as such in places—with a fictional narrative woven through it somewhat haphazardly.

The novel, as a form, has certain requisites and few of them are met in Running With Crows.  Foremost, the reader of fiction desires to experience the events of the novel with the protagonist.  The very essence of fiction, historical or otherwise, is that the reader enters into the minds of the novel’s characters and experiences, as JG Farrell wrote, ‘the detail of what being alive [in the historical period] is like.’  Hilary Mantel’s Wolf Hall and Bring Up the Bodies are fine, if obvious, recent examples of this,working so wonderfully as novels because we experience the events of the historical record through Cromwell’s eyes and not Mantel’s.  Running With Crows, however, is something different and what it is, is not a novel.

Running With Crows is a book about William Mitchell as told by DJ Kelly, but the reader is rarely allowed to enter Mitchell’s story through the conventions of fiction because the dense compendium of historical detail serves as a bulwark between the reader and the story of his life as he would experience it as a fictional character.  The reader does not feel for William Mitchell.  His plight does not generate the sympathy required of fiction because the reader learns much about him but never comes to know him, never gets to the ‘detail of what being alive was like’ for William Mitchell.

As a novel, Running With Crows fails and this is unfortunate, because Kelly’s prose, when she is writing what one assumes to be from the historical record, can be lucid and finely paced. For this the book is well worth reading.

As mentioned above, all historical novels are ‘research-based’.  But it is the duty of the historical novelist to selectively cull this research, leaving only what is essential to the story being told.  In Running With Crows, Kelly leaves in the research an historical novelist in the traditional sense would leave out because much of it would be superfluous to the story being told.  So as a novel, Running With Crows fails and this is unfortunate, because the history she has chosen to leave in at the expense of the fiction, is often quite compelling.

Kelly’s prose, when she is writing what one assumes to be from the historical record, can be lucid and finely paced.  Her research is thorough and fresh—many terms and details of the period were new to me and she is particularly good on the employment conditions of the Temporary Constables assigned to RIC barracks around Ireland.  We learn much about the period, whether it be tenement life in Dublin, tanneries in Victorian London or the hardships of Field Punishment 1 during the Great War.  Her chapter on the typical squaddy’s life in colonial India is particularly impressive and for this chapter alone, the book is worth reading.

There are parts of the book where Kelly achieves her aim and writes something akin to ‘research-based’ historical fiction.  The scenes set in Mitchell’s court martial read as a fine blend of court transcript filtered through the fictional consciousness of the accused Mitchell.  The—one imagines—wholly fictional scene with his wife on the eve of his execution is quite unexpectedly moving, the execution scene a small triumph of restrained, clinical observation.

Kelly has also done a fine job casting doubt on the justice of the guilty verdict which sent Mitchell to the gallows, hinting that perhaps another Tan in Dunlavin barracks was guilty of the crime for which Mitchell paid the ultimate price.  But is this Kelly’s creation or was this possible miscarriage of justice evident in the historical record?  Questions such as this abound in Running With Crows, leaving one wishing that Kelly had used her obvious skills as a researcher and writer of narrative non-fiction to give us a conventional biographical study of Temporary Constable William Mitchell’s life and times, rather than the flawed hybrid that is this ‘research-based novel.’

Kevin McCarthy is a novelist. His first book Peeler was set in the Irish War of Independence and his forthcoming book Irregulars is a detective story set during the Irish Civil War.