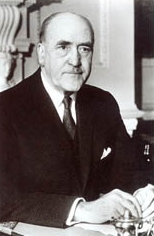 Almost uniquely amongst the leading figures of the Irish revolutionary period, 1916-1923, Frank Aiken (1898-1983) does not have a biography devoted to him. This is now set to change with Irish Academic Press confirming that it will publish a biography of Aiken in 2014. As a prelude to this edited collection, Liverpool Hope University is hosting a conference on Aiken on 23 March 2013. In this article conference co-organiser and co-editor of the new volume, Bryce Evans, provides an outline of Frank Aiken’s colourful life.

Revolutionary; statesman; polymath: Frank Aiken cuts a colossal figure in twentieth century Irish history. But in 2006, when RTE broadcast a documentary on him as part of its ‘Hidden History’ series, sectarian killings in County Down featured most prominently. Clearly, in post-Peace Process Ireland, Aiken remains a controversial figure: one version of the documentary was later posted online with Aiken contemptuously dubbed the ‘Butcher of Altnaveigh’. Like many politicians of his generation, Aiken’s involvement in politics came by way of the gun. Unlike others, most notably his long-time colleague Seán Lemass, Aiken’s reputation as a republican hardliner has often eclipsed his later political achievements.

Aiken’s birth and upbringing in what would become Northern Ireland provide the outline sketch for the anti-partitionist dinosaur of caricature. He came from a sturdy Catholic, nationalist, farming family in County Armagh. As a young man of 20 he was elected captain of the Camlough Company of Volunteers and, opting for the romance of a life on the run above the security of the farm, became its commandant in 1919. By March 1921 the physically imposing Aiken, every inch the IRA ‘big man’, had risen to commandant of the 4th Northern Division. A few months later, Aiken’s reputation was bolstered by his responsibility for a ‘spectacular’: the derailment outside Newry of the troop train carrying the cavalry regiment which had escorted King George V at the opening of the Northern Ireland parliament.

Aiken, every inch the IRA ‘big man’, had risen to commandant of the 4th Northern Division at the age of 21.

Still a young man, Aiken’s military deeds were earning him plaudits from his comrades and the grudging respect of his enemies. Derailing the troop train was the start of a dogged opposition to the new six-county statelet which would never desert him. Nonetheless, with civil war looming over the terms of the Anglo-Irish Treaty, Aiken assumed a neutrality he would later apply to the highest reaches of foreign policy. His earnest efforts to avert civil war were reflected in his key role in the negotiation of the ill-fated Collins-de Valera electoral pact in May 1922.

But the noble derring-do of this emerging lion of the north would soon become tainted by the actions of his IRA division. Allegedly responding to the rape of a local Catholic woman, Aiken’s men carried out a notorious reprisal massacre in Altnaveigh, Co. Down, on 17 June 1922, when several members of a small Presbyterian community were shot dead. ‘The Butcher of Altnaveigh’ was born.

Aiken was accused of being behind a sectarian atrocity in South Armagh in June 1922.

Meanwhile, Aiken was struggling to maintain his neutrality in the civil conflict. His refusal to endorse the provisional government in Dublin led to his arrest and imprisonment in Dundalk jail. Irrepressible, Aiken first led a mass escape of over a hundred prisoners, then recaptured Dundalk and its military barracks.

Aiken brought his swashbuckling exploits to an end and secured his place in history when, as successor to Liam Lynch as IRA chief of staff, he gave the cease fire order ‘to dump arms’ in May 1923. Aiken later topped the poll as the Sinn Féin abstentionist candidate in Louth at the general election of August 1923, a seat he held until his retirement from politics fifty years later. He endorsed Éamon de Valera’s decision to dump abstentionism, and under the banner of the newly founded Fianna Fáil entered Dáil Éireann in August 1927. Thereafter, he settled into political life in Dublin, residing at his family home, ‘Three Rock Farm’ in Sandyford from 1928 onwards.

Settling into married life with his wife Maud in the 1930s, Aiken fathered three children. He now brought his political skills to bear in consolidating the state. Aiken’s links with the IRA were instrumental in reconciling the army to the Fianna Fáil government in 1932 and beyond. De Valera appointed him Minister of Defence and ministerial appointments in successive Fianna Fáil governments followed. Aiken enthusiastically championed the state-driven turf development of the 1930s and, as ‘the most enthusiastic of amateur inventors’ as a British contemporary humorously dubbed him, devised many schemes of scientific innovation, some hare-brained and some brilliant.

During Aiken’s political career with Fianna Fáil he championed the state-driven turf development and oversaw a fastidious censorship regime during the Second World War.

With the coming of World War in 1939, Aiken would do much to sully his reputation with Ireland’s liberal elites and its masses alike by overseeing a fastidious censorship regime. He did possess an under-documented wit, however, and with the lifting of censorship in 1945 he drily invited his corpulent anglophile antagonist ‘Bertie’ Smyllie (editor of the Irish Times) to an end-of-censorship dinner in Dublin Castle with the words ‘Dinner Jacket optional. Rapier de rigueur. Dagger verboten’.

Infamously, Aiken’s truculent articulation of Irish neutrality before US President Franklyn Delano Roosevelt in 1941 prompted FDR to fly into a near-apoplectic rage during which he pulled the tablecloth from the Oval Office table, sending cutlery flying around the room. But contrary to popular opinion, Aiken’s trip to America was not a dead loss. He did not come back with arms but he was able to acquire two ships – later renamed Irish Pine and Irish Oak – which kick-started the celebrated Irish Shipping Ltd. and did much to save cabinet colleague Seán Lemass’s bacon at a time when Ireland’s food supply situation was truly perilous and starvation a distinct possibility.

Aiken’s wartime antics did much to secure his reputation as an Anglophobic anti-partitionist. Pub rumours might have had it that Aiken, given half a chance, would order a border incursion, but de Valera trusted him; in 1951, with his party’s return to power, he chose Aiken to succeed him as Minister for External Affairs. It was this portfolio which would allow Aiken to realise his undoubted political talent, taking it to the world stage.

With Dev moving to the Áras in 1959, many feared that the unity of the Long Fella’s era would be shattered. The rivalry between Lemass and Aiken, two of de Valera’s most loyal lieutenants, is renowned. Yet, as Taoiseach, Lemass made Aiken Tánaiste after the 1965 election and Aiken backed Lemass’s meetings with Northern Ireland Prime Minister Terence O’Neill in the same year. A notable point of departure between the two men was Aiken’s determination to cement a non-aligned Irish identity at the United Nations. Thus continued Aiken’s lasting impact in forging some of the central tenets of Irish cultural and political self-expression to this day.

At the UN, Aiken continued to passionately pursue decolonisation in Africa and Asia

With Lemass orienting Ireland ever closer to Anglo-American hegemony, Aiken bravely stuck out his neck and steered a different course. Most notably, he advocated the representation in the UN of the Peoples’ Republic of China (in place of nationalist China) as a point of principle. Whereas Lemass’s early political radicalism had long been overshadowed by the commercial priorities of ‘Ireland Inc’, Aiken continued to passionately pursue decolonisation in Africa and Asia, ensuring Ireland’s palatability to the UN as a peacekeeping nation. Aiken’s left-leaning image is bolstered by his disdain for ‘the men in the mohair suits’, the likes of the brash Charles J. Haughey, who brazenly canoodled with speculators and builders in Dublin bars and restaurants.

And yet he remained, like Lemass, a social conservative who was anxious about the creeping liberalisation of Irish society.

Aiken disliked Charles Haughey and did not attended any Fianna Fail events for the last ten years of his life.

Under Jack Lynch, an ageing Aiken was reappointed Tánaiste and Minister for External Affairs. Far removed from the republican thug of Unionist lore, Aiken would maintain a moderate stance when the modern Troubles erupted in 1968–9. More impressively Aiken, a lifelong opponent of partition who had suffered the razing of the Aiken family farm in the earlier Troubles, backed Lynch over the Arms Crisis of 1970. Such was his venom towards Haughey, Aiken privately announced that he would resign rather than fight the 1973 election if Haughey was ratified as a Fianna Fáil candidate. Disillusioned with the direction the party he had helped found was now taking, in the last ten years of his life Aiken never attended another party event. He died of natural causes on 18 May 1983.

A steadfast republican, Aiken was at the same time a much more complex figure than is commonly credited. Endearingly, as well as performing the duties of the statesman, Aiken privately tinkered with inventions and ideas all his life. To his detractors, this scientific imagination exceeded a political imagination. The more quixotic of Aiken’s designs lent themselves to criticism by Todd Andrews, head of the Turf Development Board. To Andrews, he possessed a certain impracticality borne of his ‘easy’ farming background, meaning that he ‘had never the experience of earning a living’ and therefore ‘could not distinguish between poverty and frugal comfort’. This was an unkind verdict on a man who refused to subscribe, despite global fashions emerging in the last years of his life, to the diktats of neo-liberalism and who retained, to his death, the principled radical tinges of early Sinn Féinism and early de Valerism.