Historian James Durney talks to John Dorney and Cathal Brennan about the experience of a street in Dublin, nicknamed, “the Dardanelles” by British troops during the Irish War of Independence.

This interview was inspired by Durney’s article in the Irish Sword journal of  Irish military history.

Aungier, George’s, Wexford and Camden Streets are really one long avenue that winds from the Grand Canal into Dublin city centre. During the War of Independence it was also the main route for British troops and Auxiliaries making their way from Portobello (now Cathal Brugha) barracks to Dublin Castle and because of this, it was one of the main sites of the IRA Dublin Brigade’s attacks.

Focussing on this area gives us a  window into the guerrilla war in the capital. Small parties of IRA fighters, from the Active Service unit and the Third Battalion would launch gun and grenade attacks on passing lorries before melting back into the crowds of shoppers and traders.  As often as not, their bombs would cause no military casualties but would hit bystanders.

Nevertheless, James tells us, the response of the British, which was usually to stop and blaze away at anything moving meant that they tended to get the blame for civilian casualties. Despite this, the reckless nature of some IRA attacks in crowded streets drew the ire of Republican Minister for Defence Cathal Brugha.

Aungier Street was the main route for British troops and Auxiliaries making their way from Portobello barracks to Dublin Castle and because of this, it was one of the main sites of IRA attacks

This tends to back up the view that this was a political confrontation the British could not win. Even the Carmelite Order’s Church on the street seem to have allowed their building to be used by the guerrillas at one point.

In the split over the Treaty, the Dublin IRA seems to have been split between its elite units – the Squad and the Active Service Unit – and the companies of the Dublin Brigade. The closeness of the former to Michael Collins meant that they went pro-Treaty while the rank and file Volunteers opposed the settlement.

Apart from the Easter Rising and some other landmark events such as Bloody Sunday in November 1920 and the Four Courts battle in July 1922, the revolutionary period in Dublin has been seriously under-studied. More work such as that James Durney has done can help to redress this and give us a view of the times from street level up. 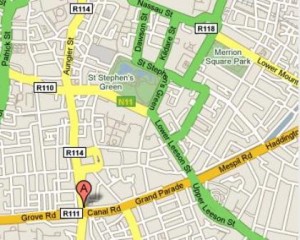