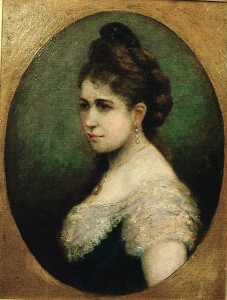 The battle on Achill Island in 1912-13 between Agnes McDonnell and her tenants. By Patricia Byrne.

On 7 March 1913 a convoy of carts laden with hay approached the crossroads close to the Valley House in north Achill.

The hay had been purchased by the Valley House Estate owner, the English woman Agnes MacDonnell, at an auction of the assets of the late Father Connolly PP of Achill Sound and Mrs MacDonnell’s workmen were transporting the hay to her home.

Given the landlord-tenant tensions in Achill over previous months, protection had been sought for the convoy and several policemen accompanied the carts. A large crowd had gathered at the crossroads and, as the convoy neared the group, a shower of stones and turf descended on the procession of carts.

The police drew their batons and several people were seriously injured before the crowd dispersed. Agnes MacDonnell was just one of several women who gained national notoriety from their involvement in the Achill land agitation of 1912/1913 when the islanders undertook a determined campaign to force the landlords to sell land to the Congested Districts Board for distribution among the tenants.

It was almost a decade since Agnes MacDonnell and the Valley House had made national and international headlines when the landowner was brutally attacked and her home set on fire on the night of 6 October 1894. James Lynchehaun was convicted of the crime in Castlebar Court in 1895 and sentenced to life imprisonment.

Such was Agnes MacDonnell’s disfigurement from the attack that she wore a veil in public for the rest of her life. She doggedly remained on in Achill, managing her estate and gaining a reputation as an unrelenting landlord. She had rebuilt the Valley House by 1902, the same year that her attacker spectacularly escaped from Maryborough Prison and fled to the United States. He won a groundbreaking extradition case in Indianapolis in 1903 when the British authorities failed in their attempt to have him returned to Ireland to finish out his sentence. Over the years James Lynchehaun was reputed to have made several clandestine visits back to Achill but Agnes MacDonnell stubbornly refused to be driven from her estate.

The Cry from Achill

If Agnes MacDonnell had gained notoriety as an Achill landlord, there were other prominent women who threw their support behind the Achill tenants during the turbulent period of land agitation in 1912/1913. One of these was Anita McMahon whose strong letter (‘A Cry from Achill’) on the plight of the islanders was published in The Mayo News just a week before the attack on the hay cart convoy at Valley crossroads. ‘Achill Island was one of the first places that the Congested Districts Board, now twenty years in existence, was intended to benefit,’ she wrote.

She went on to complain that the compulsory powers of purchase in the Birrell land Act of 1909 had brought no benefits to Achill where ‘young children, girls as well as boys, are taken from school and sent with their elders for the harvesting, where the horrible conditions under which they are obliged to live are a grave moral as well as physical danger’. Anita McMahon was a Cork-born journalist who had worked in London and first came to Achill in 1911 to learn Irish in the Scoil Acla Summer School. From the moment of her arrival she was prominent in articulating the economic plight and hardship in national and local newspapers. 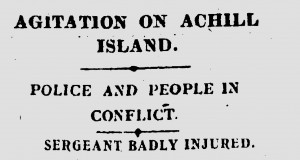 Attend to my own business in my own way

When Anita McMahon came to Achill in 1911 she befriended Emily Weddall, a founder of the Scoil Acla summer school who had come to live on the island in 1906 with her husband, Captain Edward Weddall. Mrs Weddall had vigorously campaigned on the Achill tenants’ behalf even though she herself was a trustee of the extensive Achill Mission Estate. She attended the protest meetings organised throughout 1912-1913 to push the tenants’ demands that the Congested Districts Board purchase the Achill landlord estates and was frequently present at the Achill Petty Sessions when tenants were charged with disturbances connected to the land agitation.

She also publicly took issue with the decision of the Westport Union to grant Dr Thomas Croly, a fellow trustee of the Achill Mission, full pension on his retirement as Achill medical officer.

The month of March 1913, which started out with the attack on the a hay cart convoy in north Achill, ended with all the major landlords in Achill publicly stating their intention to offer their estates for sale to the Congested Districts Board. In a statement to her tenants Agnes MacDonnell wrote: ‘I will have maps prepared and lodged with the Board without unnecessary delay, provided all illegalities will at once cease, and that I am able to attend to my own business in my own way.’

While it appeared that the land agitation had resulted in some success, Agnes MacDonnell would, however, retain ownership of her lands until her death a decade later. Emily Weddall and Anita McMahon would go on to take an active role in the nationalist political movements of the coming decade.

Note
Patricia Byrne’s narrative nonfiction book The Veiled Woman of Achill about the 1894 Valley House atrocity is published by The Collins Press in April 2012. She previously wrote about James Lynchehaun’s attack on Agnes MacDonnell/McDonnell for The Irish Story.