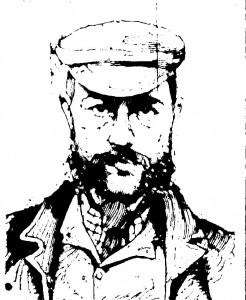 On Saturday morning, 5 January 1895, an excited crowd waited on the platform of Westport Railway Station. The train from Mulranny was expected and it carried, under heavy police escort, an infamous passenger. The fugitive criminal James Lynchehaun had been on the run for three months throughout that bitter winter and was tracked down the previous night in a hiding place at the home of James Gallagher of Shraheens, Achill. The prisoner was brought before the court in Westport.

The Mayo News correspondent at the scene reported that the handcuffed Lynchehaun appeared to have put on weight, sported side-whiskers and walked boldly through the crowd. The paper published a pencil sketch of his appearance as he entered the courtroom.

The Crime
It was in the darkness of an October night, three months earlier, on the remote northern edges of Achill that violent and terrifying events took place which would draw attention to the island from far and wide. Agnes McDonnell, and English woman and owner of an extensive estate in the townland of Valley, was brutally attacked and her home, the Valley House, burnt to the ground.

Dr Croly, who attended the injured woman, described the horrendous injuries he encountered: ‘Mrs McDonnell was in an almost lifeless condition. Her hair and nightdress were saturated with blood. Her pulse was trembling and barely perceptible. Her breathing was weak.  Her body was almost cold.’

Agnes McDonnell survived the attack but lost her right eye and wore a veil in public for the rest of her life to conceal her disfigurement.

James Lynchehaun was Agnes McDonnell’s tenant and had been in dispute with her for some time. He was quickly arrested and charged. A week after the attack, the prisoner dramatically jumped from a long car at Polranny as he was being taken back to Castlebar Jail. 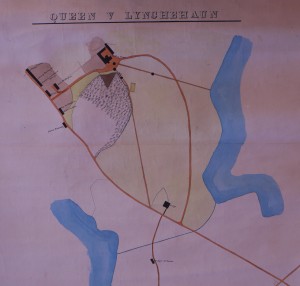 Conviction
The trial was held in Castlebar in July 1895 when James Lynchehaun and Agnes McDonnell faced one another for the first time since the attack. The Valley House crime scene was dramatically illustrated on a large, hand-drawn map by surveyor C.K. Dixon.

James Lynchehaun was found guilty and Justice Curtin pronounced sentence: ‘Your crime is murder, except for the accident that by a merciful intervention of providence this woman was endowed with splendid courage and vitality, though poor wreck she will live for a few and miserable years. The sentence of the court is penal servitude for life.’

Agnes McDonnell stayed on in Achill, managing her estate, worshipping at St Thomas’ Church and occasionally visiting her city home in London.

Notoriety
More would be heard of James Lynchehaun. Seven years after his conviction, he sensationally escaped from Maryborough prison and made his way to the United States. The authorities were determined to have him extradited back to Ireland to serve out his sentence. However, in a landmark court case in Indianapolis, Charles W Moores, US Commissioner, ruled that James Lynchehaun’s crime in Achill was a political one and the prisoner could, therefore, not be extradited. ‘Let the prisoner be discharged,’ he ordered.

James Lynchehaun was transformed from criminal outlaw to political hero. His status soared to new heights in 1907 when John Millington Synge’s The Playboy of the Western World – set in North Mayo – was premiered at the Abbey Theatre to riots and shouts of ‘Hurrah for Lynchehaun!’. Synge had included a reference to Lynchehaun in an earlier draft of the drama and had spoken of the indirect influence of the ‘Aran and Lynchehaun’ cases on the work.

James Joyce included a reference the infamous Achill man in Ulysses in his description of a bailiff: ‘He’s a cross between Lobengula and Lynchehaun.’ Stories abounded about Lynchehaun’s legendary exploits about which it became increasingly difficult to separate fact from fiction. 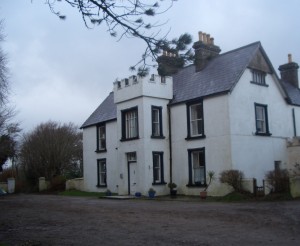 The End
On 2 December 1937, under the bold headline He Baffled Police of Two Countries, the Irish Independent reported that James Lynchehaun had died in Scotland. He had become a pathetic figure in his later years, spending some time as an inmate of the County Home in Castlebar, when it was reported that he applied to be placed on the voter register. The Connaught Telegraph recounted that, when told that his application was refused because he was an inmate of the Home, the fallen hero was said to have replied, ‘I have no other home.’