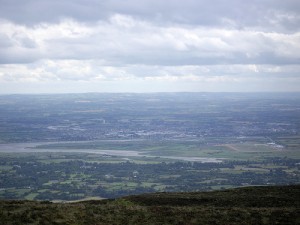 A two-wheeled journey through the Pale. By John Dorney.

I rode my bike from south Dublin to Carlingford in the Cooley peninsula in January 2012.

The bicycle, when it was popularized in the late 19th century, was the equivalent then of cheap air travel today – liberating people to travel in a short time distances that before would have taken days or weeks. Patrick Kavanagh wrote about how travelling a mere 12 miles in his native Monaghan in the 1950s could transport a man into a different parish with a whole different set of customs, accent and view of the world.

The humble machine still has this use today. On a bike you really feel the landscape, smell the manure of the fields, see all the sights on the back roads. It brings you in touch with a human geography that speeding down an enclosed motorway, with nothing but the muffled roar of engines in your ears could never do.

My trip also took me through one of the most endearingly historic regions of Ireland, the Pale – centre for some 500 years of English settlement in Ireland.

The first stage of this trip takes you through the clatter of Dublin, the cars, the heavy machinery, the music – in Finglas a car caught my eye, stopped at a traffic light blaring out dance music, the young driver thrusting himself forward in the seat to the pounding of the beat – the drizzle sprays up a stream of dirty gravel slime at you.

But when you turn off the little roundabout, past Dublin airport and into the country village of St Margarets, everything changes. A quiet descends, bar the odd passing car, the fields seem peaceful, soothingly green, with the odd cow plodding about.

The villages – Oldtown, the Naul, Annagassan, Castlebellingham – have beautiful, very old, stone-built churches. The fields are neat and well kept – growing crops. The landscape seems tamed but in human way – showing all the signs of being cultivated over many hundreds of years. Were you to ride in the other direction from Dublin, into the hills of Wicklow, you would enter a barren, brown wilderness of heather and sheep.

North County Dublin, Meath and Louth is the true Pale, where people have tilled the rich land since medieval times. This is only part of Irelandwhere the English language was universally spoken before the 1600s. The English thought their settled, cleared farmlands marked them out from the wild hills and bogs inhabited by their cattle-raising Gaelic foes. And you can still see the distinction in the landscape.

Beyond Drogheda, perhaps one imagines it, but in the back roads, the village in the hilly country has a name derived from Irish, ‘Ballymakenny’ – ‘the town of Kenny’s son’ and the next, amid the rolling fields, an Old English one, ‘Grangebellew’ – ‘Bellew’s farm’.

Irish history is, of course, full of ironies though. The Catholic Old English of the Pale became ‘Irish’ after the reformation – incorporated into a new, confessional understanding of their identity. In the village of Oldtown you can see memorials to Mary Weston and her three brothers, who died fighting for the United Irishmen atTara in 1798 and ‘Mary Adrian and comrades of the Old IRA Fingal Brigade 1919-21’. Pure Irish rebels, pure Old English names. Listen to the accents in Drogheda and Dundalk, focus out a little bit and you could almost be in Lancashire, with the dropped ‘r’s and the prolonged vowels.

The mountains rise up like steep walls north of Dundalk. It’s not an accident that this area has always been a borderland. The modern main road from Dundalk to Newry runs right through the Gap of the North, where Hugh O’Neill’s fighters once ambushed English columns trying to penetrate Gaelic Ulster. Crumbling Elizabethan tower houses still watch over the road on the hillsides. Carlingford itself, wedged in between the mountains and sea, was a fully fledged medieval frontier bastion, and no less than four, now ruinous, castles mark the four corners of the town.

Now of course, there is again a border here, albeit no longer, since the peace process, manned by armed British troops, but its meaning has changed totally from the frontier of the 1500s. Now the north is the British ruled enclave and the south, the former Pale, the heart of nationalist Ireland. In Dundalk, outside the courthouse, a Celtic warrior, erected in 1898, commemorates the republican rebellion of 1798. In Newry, some 10 miles distant, an obelisk wreathed in poppies, commemorates ‘our glorious dead’ of the First World War. Plantation and religious difference since 1607 will tell you some of the story here, but the landscape allows you no such simplicities. A faded Celtic cross in Castlebellingham, County Louth, lists the local men ‘who died for Ireland’ (no surprises so far) ‘in the international war of 1914-18’.

So your head will be filled with these contradictions, you will see, and the locals can point out to you, where Cromwell breached the walls of Droghedain 1649 and slaughtered the garrison. You will ride by signs for the battlefield of the Boynein 1690. I had just written about 1647 when Eoghan Rua O’Neill’s army burned this area so thoroughly that no one expected harvests out of it for many years.

A photo from 1922 shows Millmount fort in Drogheda smashed byFree State shells in the civil war. A newspaper headline in the same museum tells of two local men murdered by the Black and Tans in 1920. You know that much more recently, the Provisional IRA operated out of Dundalk– giving the area the reputation of ‘bandit country’.  A famous anecdote from the early 1970s tells of how the Provos on the run from Belfast used to shoot up the tv screens in the Dundalk bookies when their horse lost. 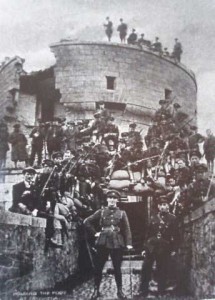 But what will in fact strike you is how peaceful everything is. All you will see is villages, each with their own Church and primary school. Tractors and vans go about their business. Boats bob up and down in the waves at a charming little fishing harbour at Castlebellingham. The odd Garda van checks cars for tax an insurance. Everywhere I went, I met nothing but kindness and friendliness. Travelling at a relatively slow pace and with only your muscles to combat gravity, you can feel the realness of the landscape, its ups and downs, its good land and bad.

A visit to the Museum at Millmount in Drogheda shows you another side to the country, quite apart from  history’s blood-soaked milestones. Displayed are lovingly prepared  banners of the 19th century artisan associations, the bakers, the millers, the railway locomotive engineers. Photos show them – suited, tied and collared – marching through the streets of 1890s Drogheda, their banners carried by barefooted kids, their wives, all dressed up in long corseted dresses and bonnets watching from the side of the road.

Another banner represents the agricultural labourers, depicting a worker threshing corn, flanked by his smiling wife and young daughter. Apparently sons were not allowed to work in the fields. Popular superstition had it that they would be kidnapped by leprechauns or other malevolent spirits if they went to work in their infancy, though the tradition may in fact have been to encourage the education of male children.

The next day, rolling back towards Dublin, I didn’t appreciate the sharp little hills between Drogheda and the Naul nearly as much as I had on the way out. As dusk came on, the city, situated as it is a hollow of the Liffey valley, glowed orange in the distance. Skirting Dublin airport, Planes roared overhead. Drivers, impatient on the narrow road, blared their horns at me. Home sweet home.

9 Responses to "A Pale trip through history"