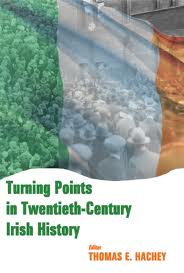 Simply put, this is the most interesting book on Irish history this reviewer has read in some time.

A collection of 12 essays on pivotal moments in the twentieth century in Ireland, it, along with books such as the recent Riotous Assemblies, is a welcome initiative in bringing academic historians’ work to a popular audience, in paperback, at reasonable price.

Like all such collections, there are strong and weak parts to this book, but rather than criticise, this review will concentrate on three articles that stood out.

The first is by Peter Hart, who sadly passed away not long before the book was published. In a typically provocative manner, Hart addresses the question of, ‘What did the Easter Rising Really Change?’. Hart, throughout his career, delighted in upsetting Irish nationalist orthodoxies of various kinds and this essay is no different.

He ponders, ‘Can a few people just decide to change the course of history by sheer Al Quaedaesque willpower?’ The short answer Hart comes up with is, ‘no’, that the upheaval in Ireland from 1916-18 was primarily a product of the Great War and the breakdown of the Home Rule project. Those familiar with his work will recognise the rather provocative language – The war, ‘gave the republican conspirators a chance to enact their fantasy’ – but also the importance of his insights.

Did the Easter Rising change nothing but get a lot of people killed?

Hart tracks, for instance, the closing down of the Congested Districts Board, which supervised land reform, for the war. The most land hungry regions, in the west and north midlands, were also those which turned most heavily to Sinn Fein after the Rising. Similarly, rising prices and taxes during the war led to a strike wave and the rise of labour as a political force.

Throw in the prospect of partition, which was raised in earnest in the talks on Home Rule immediately after the Rising, and one can see how Hart can formulate the argument that the war, ‘dictated the fall of the Irish party and the rise of more radical successor, the Easter Rising just got a lot more people killed in the process’. The main effect of the Rising he argues was to mobilise a radical new generation of activists.

The article is typical Hart in that it asks very important questions in a fresh and original way. It may also be typical however in that he could be overstating his case. Sinn Fein amounted to an insignificant group before the Rising, with a very small presence on Dublin Corporation and no representation outside of that. After the takeover of the party by Rising veterans in 1917, it won a string of by-elections before its landmark general election victory in 1918.

A look at RIC County reports in the immediate aftermath of the Rising also shows that public opinion changed quite quickly from shock and outrage at the Rising itself to horror at the executions and sympathy for the imprisoned rebels. Hart’s attempt to put the Rising in social and political context is, however, well worth reading.

‘Ending war in a sportsmanlike manner’

The hand of Hart can also be seen in the second essay which stood out – Anne Dolan’s, ‘Ending War in a Sportsmanlike manner’. It was Hart who directed the attention of the Irish public in the 1990s to the nastier aspects of the War of Independence – the prevalence of assassination – the gunning down of selected unarmed targets – as opposed to combat.

But Anne Dolan’s essay on the origins of (for want of a better word) terrorism is interesting and original in that it concentrates on not just who was killed or why, but how. A grisly series of bullet-riddled bodies are presented for the reader’s attention, the woman shot down in Monaghan, the Cork case where the gunman sat on the victims chest before putting a bullet into his brain, the British agents shot in their beds on Bloody Sunday, etc etc.

Did the advent of political assassination as weapon of war blur the divide between ‘honourable war’ and murder?

Dolan’s argument is that the systematic targeting of the unarmed and defenceless, fundamentally changed the nature of ‘war’ in Ireland and, blurred the distinction between war, assassination and straightforward murder. Henceforth, assassination having been formally sanctioned in this way, excuses had to be found, and were, for the most ignoble of deeds – ‘I have no doubt but that they deserved it’, ‘the IRA were good men and they wouldn’t kill innocent people’.

The small groups of men who actually did the killing, the likes, for instance, of Charlie Dalton in the Squad in Dublin, ended up brutalised and in many cases alcoholic – ‘anything but normal’ an Army report of 1924 says of the ex-Squad men. Following another spree of killing, this time of republican prisoners in the civil war, some of these assassins ended up in mental homes and prisons after 1923.

Dolan asks, ‘when you have counseled your best fighting men to kill, how do you get them to stop?’

This is an argument worthy of very serious consideration when we think about political violence throughout 20th century Ireland. The British and also, traditionally, insurgent groups like the Fenians, thought there was legitimate separation between war, conducted between armed combatants who could recognise each other, where civilians were left alone and combatants given a chance to surrender, and ‘murder’. In the 1919-21 period there was a serious blurring of these lines.

At the same time, there is no point in romanticising conventional warfare. More civilians died  in the supposedly ‘honourable’ five days of open fighting at Easter 1916 than in any subsequent single event in 20th century Ireland. The one exception to this is the Belfast Blitz of 1941, when the bombs of the Luftwaffe killed 1,000 people in a single night. Dolan writes that the advent of political assassination, ‘ended war in a sportsmanlike manner’. In the age of total war this seems like an anachronism.

The great heroic story of how Ireland got its independence, is of course, not the most salient fact in the daily lives of most Irish people. Probably equally if not more important was the all-pervasive influence, until very recently, of the Catholic Church in the south of Ireland. The third turning point this review will look at is Tom Garvin’s discussion of how the Catholic Church’s power collapsed in Ireland in the 1990s.

Garvin shares with Hart (and Anne Dolan for that matter) a trait for lively writing and thought provoking arguments. Starting in the early 1960s, Garvin shows how, ‘if the Irish were priest-ridden it was because they liked it that way’. Over 90% of Catholics asked in Dublin thought that their Church was the greatest force for good in the country and some 87% would have backed the church in any confrontation with the Irish state.

Why was the Catholic Church in Ireland so powerful and why did it fall from power in the 1990s?

Garvin is not altogether approving of such attitudes, putting them down, not unreasonably, to the fact that most of the population had no education beyond the age of 13 and such as they did have was controlled completely by the Church.

As a result, the ‘Irish democratic process was tinged by theocracy…’opinions expressing contrary views were downplayed or even censored’.

At the same time, the small but growing educated middle class were ‘isolated and alienated’ from this political culture – 83% of those educated up to 18 disagreed in 1962 that the Church was the ‘greatest force for good’. This picture of an urban middle class, profoundly alienated by traditional Catholic culture at a personal level and at the same time never breaking entirely with it, is instantly recognisable to anyone that grew up in late 20th century Ireland.

The essence of Garvin’s argument is that, with the advent of mass-education from the 1970s, this constituency grew gradually from a small frustrated minority to a majority by the 1990s, when over 50% had some form of 3rd level education. Modern day Catholics, ‘don’t believe in dogma’ and may not go to mass but ‘still love their faith’. Garvin writes.

At the same time, the various sex-related scandals of the 1990s wrought, ‘probably irreversible damage to the Church’s central position in Irish society’. Ireland, Garvin argues, since the 19th century, was subjected to an almost unique political experiment by the Church – to found a state on Catholic social principles. This project is now finished.

The days of Church power Garvin concludes, ‘are as remote from modern Ireland as is the Gaelic speaking Ireland of the 16th century.’

‘If it gets another chance, the Catholic Church, could again play a central if humbler role’, Garvin writes. In the experience of this reviewer, Garvin’s assessment may even underestimate the collapse of religious faith in modern Ireland. Those under 25 have almost no experience of religious practice. One recent Irish Times survey remarked that Irish teenagers were, ‘irreligious to a degree previous generations would have found quite startling’.

There are many other worthwhile pieces in this book which space prohibits this review from considering in depth. Enda Delaney, Louise Fuller and Diarmuid Ferriter cover much the same ground as Garvin, charting the evolution of attitudes in independent Ireland towards sex, the Church and the past. Jason Knirck and Maria Luddy look at the role of women in the independence movement while there are also interesting pieces on Belfast’s municipal heritage as represented in the portraits of its Lords Mayor in City Hall, Irish neutrality and the Northern peace process.

This reviewer would liked to have seen more on the formation of Irish economy and on the workings of economy and social class in Ireland – an all-important everyday fact but relatively little analysed. A chapter on the cultural divide and mutual perceptions between urban and rural and in particular on Dublin and the rest, throughout the century would also be an interesting angle.

But this is a very stimulating book. The more Irish historians go on thinking critically about the past and bringing their work to the public at large, the better.

Some rights reserved by karen horton