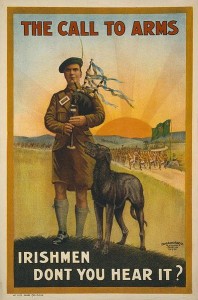 Padraig Yeates, author of, ‘A City in Wartime’, a new book on Dublin during the First World War, talks about the impact the war had on the city. (Our review is here)

Click on the link below to listen to the interview.

Padraig Yeates on WWI in Dublin

Among the things we talk about are;

Padraig Yeates is journalist and historian.  He has written, Lockout: Dublin 1913, the history of the great Dublin strike of that year. He is currently public relations consultant to the trade union Siptu. Listen to previous interview with him here and here.

Some rights reserved by infomatique

2 Responses to "The Home Front – Dublin and World War I"

Leave a Reply to Wearing a Poppy. Has our war dead somehow been airbrushed out of our history ? - Page 43 Cancel reply