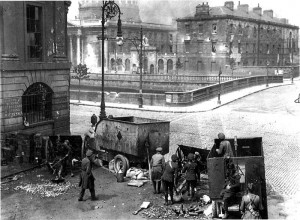 Fascinating piece by Ed Moloney on Ireland’s ‘bending the knee’ moment which gave rise to the civil war. I think it misses the impact of Wilson’s assassination, but is nonetheless an excellent piece especially because it uses Irish history in an interesting comparison with Palestinian politics right now (HT to John Dorney for finding it):

It was Collins’s willingness not only to carry out British orders in the face of threats but the fact that he used British weapons against his own countrymen and erstwhile comrades-in-arms which angered and embittered so many in Ireland. In the same way, many Palestinians will read the leaked papers, as well as US cables published by Wikileaks, and discover that before the Israeli incursion into Hamas-controlled Gaza at the end of 2008, Operation Cast Lead was ‘cleared’ with the Palestinian Authority, or that Saeb Erekat secretly offered Israel ‘the biggest Yerushalayim in history’ and feel exactly the same sense of outrage and betrayal.

via Irish republican bent-knee episode of 1922 suggests that P.A.’s weakness could have virulent consequences.