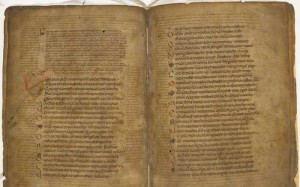 Why do people write history? The simple answer is that they want people to remember things they are in danger of forgetting. They also want them to remember in a particular way, to shape their understanding of the present.

So it was in 1632-36, in the Franciscan House at Drowse, near Ballyshannon in Donegal, where four Irish Catholic historian-clerics compiled the Annals of the Four Masters, until that time the most extensive history of Ireland – from Biblical flood until the death of Hugh O’Neill in 1616.

The Annals of the Four Masters, written in the 1630s, are an Irish-language history of Ireland from the Biblical flood until 1616

The four were Mícheál Ó Cléirigh, who directed the operation, Cú Chroigcríche Ó Clerigh, Fearfeasa O Maoil Chonaire and Conaire Cleirigh. They were all Catholic clerics but had also been trained in the Gaelic bardic tradition, which had for centuries kept account of the doings of the Old Irish clan leaders.

They had much reason to remember the past. Prior to the late 16th century, their ancestors, the Gaelic aristocracy, had ruled most of the country in petty kingdoms. Their culture – not only Irish language and customs but in particular the classical Gaelic of the learned classes – had been dominant.

Now, in the era after the Battle of Kinsale and the consolidation of the English Kingdom of Ireland, they found themselves and their culture sidelined and disparaged as “barbarous”. As well as this, the Protestant Reformation was trying to displace the Catholic religion.

The Annals portray this sense of loss keenly at times, for instance, writing of the battle of Kinsale, where O’Donnell and O’Neill’s forces were defeated by the English, the Annals tell us;

Manifest was the displeasure of God, and misfortune to the Irish of fine Fodhla [Ireland], on this occasion… Immense and countless was the loss in that place, although the number slain was trifling; for the prowess and valour, prosperity and affluence, nobleness and chivalry, dignity and renown, hospitality and generosity, bravery and protection, devotion and pure religion, of the Island, were lost in this engagement.

For the most part though, the Annals perform the much more traditional role of recording the rise and fall of dynasties and the ebb and flow of power in the Gaelic world. In this sense they were already utterly alien even in the 1630s, by which time the power of all lords was firmly subject to the state.

The Four Masters’ work was painstakingly written by hand in several volumes. One full set was sent to the Franciscan Order’s College at Louvain in what is now Belgium. The other was sent to their patron in Ireland.

The Annals of the Four Masters provide one of the only sources of medieval and early modern Ireland from an Irish point of view. In the 19th century, amid a resurgent Catholic Irish nationalism, the Annals were translated into English and printed by the scholar John O’Donovan. You can read them online here.

Today, original volumes of the Annals are located in Trinity College, University College Dublin and the Royal Academy of Ireland. In 2007, the Mícheál Ó Cléirigh Institute for the Study of Irish History and Civilisation, set up an online exhibition on the Annals here.

You can see the original hand-written pages of the Annals and read bite-sized chunks of information on the Masters themselves, their life and times and the content of their work.