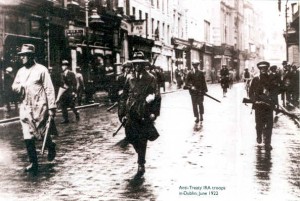 In this second of a two-part interview, John Dorney talks to historian of the IRA Brian Hanley about the armed campaigns waged by groups calling themselves the Irish Republican Army throughout the 20th century. 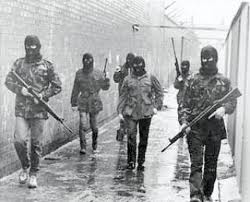 The War of Independence and Civil War

In the first section we discuss the nature of IRA armed actions. Were they “wars”, as republicans maintained, or “murder gangs”, “terrorism” and “armed crime” as their various British, Free State and unionist enemies insisted?

We also talk about the some interpretations of the War of Independence 1919-1921 and of the Civil War 1922-1923. Was the war against the British really a kind of civil war within Ireland? We talk about the question of intra-nationalist conflict and the shooting of informers. We also discuss the idea, emerging in much new research that the tactics used by the Free State forces in the war over the Treaty were in fact much more ruthless than their guerrilla enemies.

In the 1950s, a new generation of IRA activists re-directed their attention from the overthrow of the 1922 Treaty to the ending of partition. From 1956-1962 they launched a series of attacks on Northern Ireland known as the Border Campaign. We talk about how relatively “clean” – in terms of civilians casualties – but also politically naive and totally unsuccessful this campaign was. Each of the other IRA campaigns discussed here cost thousands of lives, the 1950s campaign killed only 17 people.

Another interesting topic here is the links between the IRA and the Cypriot EOKA and Israeli Irgun groups in the 1950s.

The Provisional IRA and the Troubles

Finally, we discuss the campaign of the Provisional IRA (formed in 1969), waged from the early 1970s to the 1990s against the existence of Northern Ireland as part of the United Kingdom. The Provisional IRA was much more northern-centred than previous IRAs and much more determined to represent northern Catholics and to end partition as its primary objective.

Paradoxically, although the new IRA was acting upon many of the ideas on which the southern state was based, it was widely condemned in the Republic and disassociated from the “Old IRA”. However we must also remember that, since the Civil War, the Irish state and the IRA had always been enemies. We talk about whether the Provisional IRA was really more ruthless than its predessors, the extent to which it was embroiled in a sectarian conflict and why its campaign contined for so long compared to previous eras. We also discuss the origins of the peace process.Part I of the interview -IRA Ideology- is here.

Dr. Brian Hanley is the author of; The IRA A Documentary History, 1919-2005, The IRA: 1926-1936, and with Scott Millar, The Lost Revolution, The Story of the Official IRA and the Workers’ Party. He teaches History at St Patrick’s College, Dublin.

The Lost Revolution is reviewed here at Dublin Opinion.