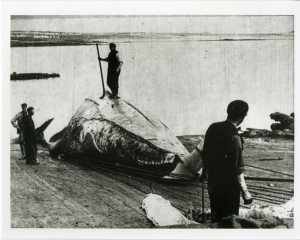 Patricia Byrne tells the story of a Norwegian whaling station off the Mayo coast in 1908-1914, which was captured for posterity in an early film documentary.

On 9 March 1908, a ship belonging to the Aranmore Whaling Company landed a consignment of timber at Rusheen Island, a small tidal islet off the island of Inishkea South in north-west Mayo. The company was Norwegian-owned but its name was derived from earlier whaling activities in County Donegal.

Over the following days and weeks, the startled islanders of Inishkea watched as the infrastructure of the whaling station took shape before their eyes: a 400 ft pier, wooden slipway, cooperage, forge, steam winches, bone crunching mill, steam boilers, sheds and an administration building. Inishkea had become industrialised.

In 1896, the Norwegian Government had restricted whaling during certain parts of the year as a result of lobbying from the fishing industry that considered whaling harmful to their operations. This provided an opportunity for Ireland’s Local Government Board to encourage the Norwegian whalers to establish stations on Ireland’s west coast and the Congested Districts Board sold Rusheen to the whaling company for £100. The Norwegians lived and socialised mainly on the nearby ships, coming ashore occasionally to visit the pubs on Inishkea North and South Islands.

Once the station was operational, another strange sight greeted the islanders when a film crew arrived and proceeded to capture the whaling activity for posterity in a film entitled Whaling Afloat and Ashore. The film’s Director, Robert Paul (1869-1943), was a pioneer of the British film industry in its formative years. Paul’s business was in electrical instrument making and in 1894 he manufactured replicas of Edison’s Kinetoscope, the first widely diffused motion picture device. Over the next 15 years Robert Paul’s film crews produced up to 1,000 titles, including the colourful pageantry of Queen Victoria’s diamond jubilee celebrations in 1897.

Whaling Afloat and Ashore (1908*) is thought to be the last of Robert Paul’s films to survive for he quitted the business in 1910 and continued to work on various engineering projects. The film may have had a promotional basis as commercial whaling was a lucrative business at the time and there was also an emerging genre of showing the intricate detail of industrial production processes.

The film opens on a whaling ship with a harpoonist successfully shooting a whale which is towed to the Rusheen station and hauled up the slipway. The blubber is stripped away, cut into pieces and fed into large steam boilers for oil extraction. The meat was dried to make ‘guano’ or artificial manure. An intriguing sequence shows the Inishkea and Norwegian whalers relaxing together during their work breaks. They dance, wrestle on their backs with their legs, hold sack races and undergo various trials of strength, occasionally glancing at the camera with self-conscious grins.

In August 1909 the islanders went on strike and succeeded in having their wages increased to £1 per week.

Between 20 and 40 islanders were employed during the station’s short existence when Inishkea South enjoyed a period of unusual prosperity. Some of the islanders became highly skilled at the whaling work, including a young man named Pat O’Reilly who was particularly adept in the use of the four and a half foot blubber knife. But there were also tensions with the South Islanders refusing to allow North Inishkea workers to be employed at the station. In August 1909 the islanders went on strike and succeeded in having their wages increased to £1 per week. 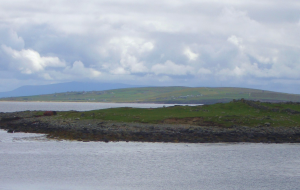 There was, however, continued opposition to the whaling station with repeated claims that it was ruining the fishing industry locally and fouling the air with its stench. Profits declined in 1910 due to bad weather conditions and tighter profit margins. The deterioration continued and by 1914 the station equipment had been dismantled.

Whaling Afloat and Ashore provides a unique record of a brief industrial period on an Irish west coast island as well as a fascinating insight into the early development of the film documentary genre.