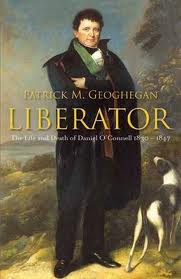 Patrick Geoghegan opens this second volume of his biography of Daniel O’Connell by stating, “it is a study focused intensely on the character of O’Connell…and does not attempt to provide a wider study of the period”.

This is surely a problem for an historical biography. While O’Connell the man is indeed a fascinating, if not always attractive, personality, this book lacks something in failing to piece together O’Connell’s importance in Irish history by placing him in the context of his times.

While, for instance, we hear of O’Connell being associated by his enemies in the Westminster Parliament with “whiteboy outrages” and with violent protests against the paying of tithes, the reader is not informed that this happened in the context of two bouts of low-level insurgency in the Irish countryside in the 1820s 1830s – the “Rockite” rebellion and “Tithe War”.

Several hundreds died in these uprisings, British troops fired on crowds, prisoners were executed and deported, landlords and tithe collectors were attacked and Protestant Churches burnt down. (As recently highlighted in James Donnelly’s, Captain Rock –The Irish Agrarian rebellion of 1821-24)

O’Connell’s espousal of non-violence in pursuit of Irish self-government, or Repeal of the Union, with the odd hint of dire consequences if it were not granted, therefore occurred in an environment where people were well aware of how and why violence might be used. Liberator would have benefited from a discussion of this.

Similarly, while we hear of O’Connell’s genuine personal agony over the Great Famine of 1845-48, when he begged the British Parliament for relief measures, there is no discussion of the Repeal movement’s policies on the land question – surely one of the most pressing issues of the day. The Repealers did indeed develop policies on the land question – such as a cap on rents and halt to evictions (See for instance, Kevin Nolan, The Politics of Repeal, 1965) but the reader will not learn of them here.

O’Connell’s clash with the Dublin trade unions in 1837-38, when he sided with the employers and as result was threatened with assassination, is also skated over rather too quickly.

However, since Geoghegan set himself the task not of “using O’Connell to understand the major events of the time” but to, “provide a first person camera view of O’Connell at work and at play”, it is fairer to judge this book by how well O’Connell the man comes into focus.

Certainly Geoghegan is fulsome in his praise of the Liberator. For instance, we learn that “tall and athletic, O’Connell was one of the most muscular figures in the House [of Parliament].” In a Repeal meeting of 1843, “O’Connell dominated the floor. He answered every argument, he replied to very question, he displayed a complete mastery over the issues involved”.

O’Connell in his young days, as we learn in the first volume of this biography, was something of an intellectual. As a student in Dublin, he walked daily to a library in Eustace Street, Temple Bar, to read such works as Plato and Gibbon’s Fall of the Roman Empire.

There is little of this reflective thinking apparent in the older O’Connell. Rather he is a master politician, ideologically imprecise but with an unerring instinct for catching the mood of his listeners and striking the right note – persuading with emotion rather than with reason.

O’Connell’s grasp of the theatrical gets many vivid airings in this book. None more so than when, at a ‘monster meeting’ O’Connell was reported to have calmed a stampeding crowd (who believed they had been fired on) by coming onto the stage and bellowing, “stand still”. Another good example is when, having been released from prison in 1844 – he had been jailed for using “seditious language” – he had two homecomings. One on the night of his release, the other the following morning, so that his followers in Dublin could formally celebrate his release.

O’Connell was a master of the theatrical and of persuading through emotion rather than reason.

The flip side of O’Connell’s charisma was his monstrous ego, which seems to have made him almost impossible to work with. One after another, we find that he fell out with almost all nationalist politicians who disagreed with him or refused to accept unquestioningly his leadership. Feargus O’Connor, for example, was pilloried by O’Connell for proposing the Repeal of the Union too soon. The “Young Irelanders”, a tendency within the Repeal movement grouped around the newspaper, “The Nation” seem simply to have been too independent-minded for O’Connell, a fact which caused the splintering of the Repeal Association at the very end of O’Connell’s life.

One of the charges commonly heard against O’Connell today is that he narrowly defined Irish nationalism around the experience of Irish Catholics, to the exclusion of nationally minded Protestants. Geoghegan argues that this is, “to misread profoundly what Ireland was like in the nineteenth century”.

As with other analytical issues, one of the problems with this volume is that the issue is not really teased out, but on balance, the evidence Geoghegan presents in the book tends to bear out this conclusion.

Catholics in Ireland started out the century unable to hold public office, barred from the corporations of the towns and compelled to pay tithes to the Protestant Church of Ireland.

On top of that, law and order was maintained by Protestant-only magistrates and the stridently Protestant Yeomanry Corps. Given that this was the situation, it was inevitable that Catholics would be mobilised as Catholics to reverse these grievances. O’Connell was certainly exceptional in demanding redress as a right rather than as a concession but he had far less animosity towards the Protestants than did many of his followers.

Consider for example the following Irish language poem written in Cork at the time of the Rockite insurrection in 1822; “may they come to no better end these foreign cubs of Calvin…they have the power, ‘tis ill they rule…Dear beloved sons of Erin, do not stop or retreat…pulverise these pigs, regain possession of your ancestral abodes”. (Donnelly, Captain Rock, p69)

O’Connell, on the other hand, insisted that Catholics had never and would never oppress Protestants in a post-Catholic Emancipation, self-ruled Ireland. What was more, we find in Geoghegan’s book that in most of Ireland things were far more fluid than a straightforward antagonism between Protestant unionist and Catholic Repealer. While we do find, for example Dublin Orangemen physically disrupting Repeal meetings, we also find that O’Connell’s right hand man in the Repeal Association, Thomas Steele, was a Protestant and one his of staff, the journalist Richard Barrett, was a former anti-Catholic Tory.

An exception to this was Ulster, a province where O’Connell rarely ventured. On his one public rally in Belfast in 1841, he required police protection from the hostile Orange mob and his speech was all but drowned out by cries of “No Surrender!” and “No Pope!”. Only one third of the crowd at Linen Hall was there to support him – a sign of things to come in the northern city.

O’Connell’s relationship with Catholicism as documented in Geoghegan’s two books, was complex. As a young man he had been a free-thinker and somewhat contemptuous of the old faith. Even in later life, after a personal re-conversion to Catholicism, the Vatican worried that he was “unorthodox in religion”.

He retained some of his old liberal attitudes in supporting Irishmen going to Spain in the British Legion to fight for the Liberals there against the ultra-Catholic Carlists, who would, bring back the Inquisition and with it, “the deepest moral degradation”. A Chapter of  this book is also devoted to O’Connell’s passionate campaigning against slavery in America – something that is more often associated with Protestant denominations. However, we do find that the older O’Connell was an observant and unapologetic Catholic.

For this reason his split with the mostly-Protestant Young Irelanders in the 1840s had a confessional tinge. Debating proposals for integrated universities (the Young Irelanders’ preference) or for separate universities for Catholic, Protestant and Presbyterian (O’Connell’s preference), Geoghegan reports a sharp exchange between O’Connell and Thomas Davis. Upon Davis referring to one speaker as, “my Catholic friend, my very Catholic friend”, O’Connell angrily interrupted, “It is no crime to be a Catholic, I hope?”

A book worth reading

In closing, Liberator is well worth reading. Along with King Dan, it paints a vivid picture of a man who dominated politics in Ireland for much of his life and who has of late fallen into rather undeserved neglect. Striking stories and illuminating exchanges from O’Connell’s life abound in this book, making it often colourful and at times funny.

This second volume could perhaps have been even more satisfying had it also provided a little more background and analysis of O’Connell’s times and attitudes.

Some rights reserved by sherber711

One Response to "Book Review: Liberator –The Life and Death of Daniel O’Connell"