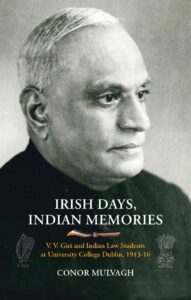 When elected leader of the Fine Gael political party in 2017 he said that there “was an understandable focus around the world” about what his ascent to Ireland’s highest political office, as the “son of a father from India” said about the Ireland of today. Indeed, international coverage showcased Varadkar’s rise to the office of Taoiseach as a reflection of the emergence of a rather new, modern Ireland, embracing its growing multiculturalism.

However, while recent decades have seen a marked increase in the diversity of Irish society, Conor Mulvagh’s “Irish Days, Indian Memories” highlights that Ireland in the early 20th Century was less insular than pleas for “comely maidens at the crossroads” would suggest. Mulvagh’s biographical work of V.V. Giri (President of India, 1967-69, 1969-74) during his time as a law student at University College Dublin (1913-16) gives an under-researched perspective on life in Ireland, and Dublin in particular, during a pivotal few years in the emergence of an independent Irish state.

The influence of Cork Mayor Terence MacSwiney on Mahatma Gandhi is well documented and celebrated, as struggles for home rule and later independence from Britain progressed in parallel in Ireland and India. Parallels too have often been drawn between the Amritsar massacre in 1919 and Bloody Sunday a year later.

However, Mulvagh’s work suggests a more intimate involvement of Indian students in Dublin in the 1910s and nascent Irish nationalist organisations. Giri was a student of Thomas McDonagh in UCD, met James Connolly on a number of occasions, had a meeting with future Minister for External Affairs Desmond Fitzgerald and left Ireland under a cloud of suspicion from British authorities. In Giri’s own words, they were suspicious that “I was not only connected with the Irish movement but that I was actively in league with it”.

It is hard not to draw strong parallels particularly between Giri’s later involvement in India’s Union movement and his organisation of strike action in 1927 with the Dublin Lockout of 1913-14 – which he would have witnesses first-hand in his time as a student in Dublin.

However, it was one far from free of prejudice with Mulvagh outlining a racist campaign against Indian students from a forgotten publication entitled the Eye-Opener. In Mulvagh’s words “Despite this prevailing attitude of cosmopolitan tolerance, there is a sense that attitudes to non-nationals, of whatever origin, were hardening by the beginning of 1916”.

The main regret of Mulvagh’s work is that we can only get a glimpse. His study is hampered by a dearth of source material leaving Mulvagh all to often unable to fully explore the tantalising avenues of enquiry his research has opened. Sadly, unless some significant new documentary evidence comes to light, this is unlikely to be addressed by further studies.