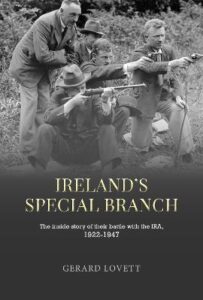 Anyone believing the Civil War was over in Ireland by 1926 might have reconsidered that viewpoint when, on the 14th November, twelve stations of the Garda Síochána came under coordinated attack by members of the Irish Republican Army (IRA). The goal was to steal, not to kill; nonetheless, two Gardaí were dead by the end.

Significant violence between the IRA and the Garda continued well after the Civl War had formally ended.

The orderly who answered the knock at St Luke’s station in Cork city managed to strike the revolver away from the man in front of him and slam the door back shut, but the bullets passed through the barrier all the same and killed Sergeant James Fitzsimons. At Hollyford station, Co. Tipperary, Garda Hugh Ward did not even get that chance, being shot at point blank range as soon as he opened the door. Ward lingered in hospital for two days before dying. Police personnel in other stations were luckier, being merely held up at gunpoint while the intruders seized whatever cash, equipment and paper records they could.

Such brazen assaults on the custodians of the law were hardly new in Ireland and would not be for the last time. A year later, almost to the day, on the 20th November 1927, Crumlin station in Dublin fell victim to the same trick: a rap one night brought Garda Thomas Doyle close enough for the bullets, fired without warning, to pierce the door and wound him. Doyle would survive, as would the integrity of the station, thanks to one of his colleagues, Murphy, shooting back with a revolver to drive off the raiders.

Significantly, the gun had not been Murphy’s own, having been left behind in a drawer by one of the Special Branch: the Garda generally went unarmed, adding to the sense of outrage as author Gerald Lovett puts it:

The deaths of Fitzsimons and Ward were the last straw for a force that since its foundation endured continuous threats and intimidation and suffered eight fatalities in their years of existence. They considered it a particularly cowardly act to shoot down two unarmed, uniformed gardaí who had no involvement in the ongoing battle against the IRA.

Rubbing salt into the collective wound was how “most of the new force consisted of former pro-Treaty IRA men” from the Civil War. Retribution could be fierce: Republican prisoners were beaten in their cells after taunts about Fitzsimons and Ward.

In the resulting public outcry, the Government wanted the policemen responsible fired, only for Eoin O’Duffy to threaten his resignation as Garda Commissioner. A compromise was reached: the culprits kept their jobs in return for paying a portion of the damages to their victims.

Wash, rinse, repeat: political subversion provoked heavy-handed responses, followed by dithering on the part of the authorities over whether to uphold their own laws or to stand by the men they relied on. Damages for assault and false imprisonment of suspects against Special Branch individuals, during a particularly heated period between 1929 and 1931, were paid for by the State. But the IRA did more than issue lawsuits.

Superintendent John Curtin was opening the gates to his Tipperary house one evening in March 1931 when gunmen, who had been lying in wait, opened fire, close enough to leave scorch marks on his clothes as well as five bullets in his body, fatally so. As the head Special Branch officer in the county, Curtin had overseen many arrests to match the surge in IRA recruitment. However enthusiastic he may have been in pursuit of his duties, Curtin’s rough methods arguably did more harm than benefit to his cases.

One witness to four men charged with illegal drilling retracted his statement to the court, saying it had been made under duress after Curtin “knocked [him] about a bit” and threatened to “paste me against the wall.” The four accused were acquitted by the jury and discharged.

Republicans gloated at Curtin’s murder. A poster issued by Cumann na mBan hailed “the men of Tipperary, true to the traditions of their forefathers” who “have shown that they will not allow a Free State superintendent to stand between them and freedom.”

The deceased, IRA spokesman Frank Ryan explained in a newspaper interview in August 1931, five months later, “had exceeded his duty. He went out of his way to persecute the IRA.” Ryan was happy to draw a distinction between the bulk of Garda Síochána, confining itself as it did to regular police work, and the overtly political Special Branch, who “if they ask for trouble…must not be surprised if they get it.”

He was blunter in regards to John Ryan (no relation), a co-operator in one of Curtin’s cases, who was shot dead on a roadside in July 1931. “He was nothing but a traitor,” Frank Ryan sneered. ‘Spies and Informers beware. IRA,’ had read the note left by the body.

It was a scene straight out of the War of Independence. But then, for some, the Irish revolution had never ended. Perhaps the Civil War had been too bitter and too savage for bygones to ever truly be bygones. “We cannot make omelettes without breaking the eggs,” Kevin O’Higgins told the Dáil in March 1923. “We cannot build up a disciplined and self-respecting decent country without hitting pretty hard a head here and there.”

He might well have had the Criminal Investigation Department (CID) in mind. Formed almost at the start of the internecine conflict in August 1922, the CID soon earned a dark reputation from their Republican targets such as Todd Andrews, due to their methods of:

…torturing prisoners under interrogation, which is to say, they were beaten and battered sometimes into a state of unconsciousness.

And these wretches could be considered fortunate since other:

Republican activities, real or suspected, were picked up on the streets and never got as far as Oriel House [the base of the CID]. They were shot out of hand.

Whatever else may be said about the CID, its tactics worked, enough for the Freeman’s Journal, upon the CID’s disbandment in October 1923, to print its concerns at the loss of such an effective tool. After all:

It is questionable if any force organised for the prevention and detection of crime has established so fine a record in so short a time. At the time they were formed most people had almost given up hope that an effective means would be found of stamping out the epidemic of armed robbery in Dublin. Inside a few weeks the CID had the bandits on the defensive, and ever since it has been keeping them on the run.

A very different picture, then, than the one Andrews painted. The newspaper need not have worried too much, for the most energetic (and more presentable) CID men were transferred to the Dublin Metropolitan Police (DMP) (the rest were dropped, possibly, as Lovett speculates, because they matched Andrews’ brutal depiction of them a little too well). When the DMP was amalgamated in turn with the Garda Síochána in 1925, and the Special Branch formed, the new force was ready to confront an IRA that was as determined as the State to be going nowhere.

The author remains admirably neutral, making it plain that both sides could be prone to violence as the solution to a problem

Lovett generally eschews analysis or commentary in his text, letting the story be told through the various listings of arrests and reprisals, shootings and beatings, police successes and official reversals. Despite having served as a detective inspector in the Garda Special Branch (retiring in 2004, according to the book jacket), the author remains admirably neutral, making it plain that both sides could be prone to violence as the solution to a problem.

And what violence there was! Ireland in the post-Civil War years seems to have resembled a Paul Williams gangland read, except the outlaws here were primarily concerned with targeting the State rather than each other (with exceptions – spies and informers beware, indeed). Contrary to the subtitle, the men of the Special Branch are only sometimes the central characters; the whole policing and legal apparatus is given considerable airing in the State struggle against the IRA – which, for its part, threatens at times to dominate the book as it almost did the country.

Trouble worked its way up to the top: Tomás Mac Curtain was spared the death penalty for gunning down Detective Garda John Roche in January 1940. This reprieve was due – according to one source, anyway – to several Fianna Fáil TDs threatening to resign their seats and thus deprive the Government of its majority.

Residue sympathy for Mac Curtain’s father, the murdered Mayor of Cork, was presumably at play, as well as how the TDs in question were formerly members of the IRA. But then, so had been Superintendent Curtin, along with many of his Special Branch and Garda colleagues, to say nothing of the other TDs in the Dáil. If this book suffers in its focus, it does compensate by capturing the wider picture of a most turbulent time in Ireland.

If you enjoy the Irish Story and wish to support our work, please consider contributing at our Patreon page here.